Skip to content
Luke 10:25-30
“And behold, a certain lawyer stood up and tested Him, saying, “Teacher, what shall I do to inherit eternal life?” He said to him, “What is written in the law? What is your reading of it? ” So he answered and said, “ ‘You shall love the LORD your God with all your heart, with all your soul, with all your strength, and with all your mind,’ and ‘your neighbor as yourself.’ ” And He said to him, “You have answered rightly; do this and you will live.” But he, wanting to justify himself, said to Jesus, “And who is my neighbor?”

“Then Jesus answered and said…..” 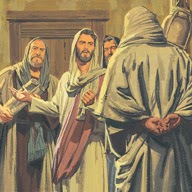 Who hasn’t heard the wonderful story of the Good Samaritan?  That poor man was beaten, robbed and left to die by the side of the road.  No one else passing by would lift a finger to help him.  No one, that is, but this unnamed man.
All of the sermons I ever heard preached on this passage were pointing at me, telling me I needed to be charitable, more kind and helpful to strangers.  While that is certainly a good and noble Christian ideal, this story isn’t really about you and I at all.
A Multi-Layered Storehouse.
There are many truths hidden in scripture and lessons to learn from this story.  The Bible is a multi-layered storehouse of treasures.  You’ll find personal applications, learn scientific principles, even find prophecies concerning the end times.  Believe it or not, there’s a timeline of events in the last days hidden here in this account!
The Backdrop.
Here’s the scene:
You’ll notice that Jesus was asked a question by” a certain lawyer”–probably a spy of the Pharisees (yawn)–who asked Him, “Who’s my neighbor,”  with this story.
Lawyers back then were not like what we think of today.  He was a graduate of and an an expert in the law of Moses, a master in Israel.  I’m sure he could quote the Bible backward and foreword verbatim.
All these pharisaical types seem to ask the same, tired old question, don’t they? “What shall I DO to inherit eternal life?”  Whenever anyone came to Him with the Law, Jesus threw the question right back at them.  He asked “What is written in the law? What is your reading of it?”  He  (the lawyer) said “to love the LORD your God with all your soul, with all your strength, and with all your mind, and your NEIGHBOR as yourself.”
What the lawyer didn’t know is that NOBODY CAN DO THAT.  Nobody can love God with all their heart, soul and mins.  We fall flat on our faces every time.  Nevertheless, Jesus complimented the guy, even though his sole purpose for being there was to test and, hopefully, discredit Him.
“You have answered rightly; do this and you will live.”
Well the guy didn’t want to look like a complete idiot {uh…..too late!} so he asked, “Who is my neighbor?”
He is just about to find out exactly “WHO” is his neighbor. 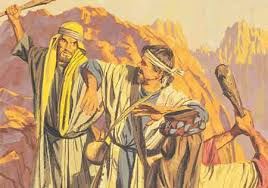 The Good Samaritan.
Let’s follow the story.
“A certain man went down from Jerusalem to Jericho, and fell among thieves, who stripped him of his clothing, wounded him, and departed, leaving him half dead.
Now by chance a certain PRIEST came down that road. And when he saw him, he passed by ON THE OTHER SIDE.
Likewise a LEVITE, when he arrived at the place, came and looked, and passed by ON THE OTHER SIDE. (Luke 10:30-32) 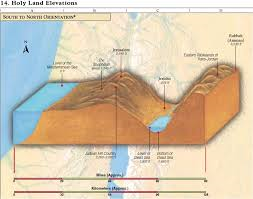 Jerusalem, geographically speaking, is very high at 2,540′ above sea level as compared to Jericho which is the lowest point on the planet: 825′ below sea level to be exact.  That’s a drop of 3,365′ folks!
Jerusalem is the city of God but Jericho is the city of the curse.  This man left the “city of God” and descended to the “city of curse.” Whenever you leave God, YOU GO DOWN, DOWN, DOWN.
Along the road thieves and robbers attacked him, stripped him of his clothing and wounded him, leaving him half dead.
Typologies.
Who is this man?  He’s all of you and I.  We were made perfect but we fell from grace–Jerusalem, the city of God–and ended up under the curse.  We were robbed, stripped, wounded, and left half dead.  Who robbed us?  The devil, of course.  He’s the chief bandit. 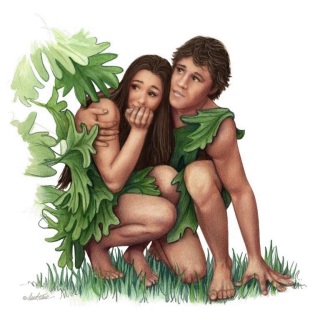 That’s what really happened when Adam and Eve fell.  They died spiritually, passing that condition on to all of us.  All mankind from birth is in the same condition as the man in the story.  We are poor, blind and naked, spiritually cut off from God until…..we accepted Jesus as our Savior!  He resurrected our spirit and we are now reconciled and reconnected with God!

I’m sure you’ve met people who, though their heart is beating and they’re walking and talking, are really spiritually dead.  They need Jesus to resurrect them! 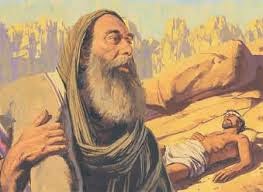 How very sad that BOTH the priest AND the Levite (the religious set) came by, saw the man’s predicament and CONSCIOUSLY decided to PASS BY ON THE OTHER SIDE OF THE ROAD.  They are a picture of the something  the devil wants to do:  Make Christianity into a “religion,” a set of rules and regulations WHICH IT IS NOT.
Why?  Because he knows the law keeps more people from coming to Jesus than anything else.
Roles of Priests And Levites.
The priests of ancient Israel worked inside the temple, the house of God, while the Levites’ job was to assist them.  These two groups are a depiction of “Religious” folk today.
What did they both do?  Avoided contact with this unfortunate man!
These were the people who were supposed to be in touch with God. These are the ones who were supposed to protect, to feed and to care for the flock.  But not only did they NOT do that, they left the man broken and bleeding, passing by on the other side of the road.  These people, like the religious of today, were devoid of compassion.
The next portion of Jesus’ narrative no doubt shocked and dismayed the lawyer.

“But a ‘certain’ Samaritan, as he journeyed, CAME WHERE HE WAS. And when he saw him, HE HAD COMPASSION.  So he went to him and bandaged his wounds, pouring on oil and wine; and he set him on his own animal, brought him to an INN, and took care of him.”

That just touches my heart!  You and I were broken, bleeding, robbed of everything and dying.  No one could or would help until this wonderful Stranger came along and had compassion on us! 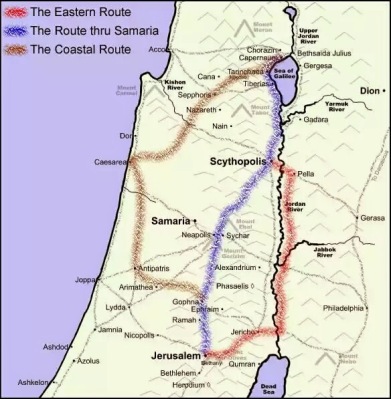 Jews Hated The Samaritans.
Samaritans of Jesus’ day considered themselves to be Jews, though they actually were not.  The Jews hated them like modern day Jews hate those who call themselves “Palestinians” today, speaking generally.
Back then, when Jews needed to travel to the Galilee region, instead of going straight north, which would be the most direct route, would take the Eastern route {see map}, cross over the Jordan river, skirt around Samaria and cross back over the Jordan into Galilee. 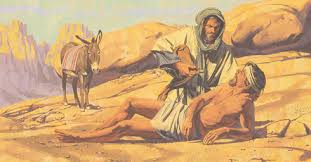 Who Is This Samaritan?
Who is this “certain Samaritan?  It isn’t just ANYONE.  It’s Our Lord Jesus, of course!  He came down to earth, a Divine Stranger from the city of God because He does have COMPASSION on us.  If He hadn’t come down to where we were, we would never be able to come up to where He is.
Two Days Wages:  A Timeline.
Let’s continue the story.
“On the next day, when he departed, he took out TWO DENARII, gave them to the innkeeper, and said to him, ‘Take care of him; and whatever more you spend, WHEN I COME AGAIN, I WILL REPAY YOU.’”
A denarius is a Roman silver coin equals to one whole day’s wage.  This certain Samaritan gave the innkeeper TWO DENARII.  That’s payment for TWO DAYS WAGES.

Under normal circumstances, the unnamed stranger would have taken the man back to Jerusalem.  But since the Jews rejected their Messiah, Jesus, He brought the man to a seemingly unlikely place:  AN INN.

This inn is a typology of the non-Jewish Church.  He gave the innkeeper “two days wages,” promising that if any additional expenses were incurred, he would return after two day and repay the innkeeper.

God’s Accounting Of Time.
Remember what the Apostle Peter said?  “But, beloved, do not forget this one thing, that with the Lord one day is as a thousand years, and a thousand years as one day.” (II Peter 3:8.)
After TWO DAYS, the Good Samaritan…..Jesus…..will return to the inn:  The Church!
Jesus has been gone 2,000 years, right?  According to the way God counts time, to Hin it’s only been two days.  HE WILL BE COMING BACK FOR THE CHURCH VERY SOON.
Jesus ends this whole story saying, “So which of these three do you think was NEIGHBOR to him who fell among the thieves?” And he said, “He who showed mercy on him.”
Then Jesus said to him, “Go and do likewise.” (Luke 10:36-37)
Who Is Your Neighbor?
We’ve been taught that this whole story is about loving your neighbor, being kind to the less fortunate, etc., etc., right?  Yes, that is a good lesson to take away from this story.  But that is not what Jesus was saying here.
Look a bit little closer.  The obvious answer is THE GOOD SAMARITAN WAS A NEIGHBOR TO HIM.
What did the lawyer say about the Law of Moses?  The last line said to “Love your NEIGHBOR as yourself.”
And who, of the three:  The priest, the Levite or Jesus, acted like a “NEIGHBOR” to the man?”
JESUS! 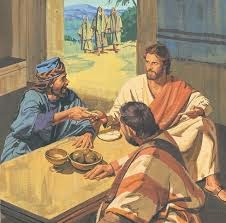 Go and do thou likewise.  Love your NEIGHBOR:  LOVE JESUS!

And that, Church, is the real heart of the matter in the story of The Good Samaritan.