1 Peter 3:18-20
18″ For Christ also suffered once for sins, the just for the unjust, that He might bring us to God, being put to death in the flesh but made alive by the Spirit,
10 by whom {the Holy Spirit} also He went and preached TO THE SPIRITS IN PRISON,
20 WHO FORMERLY WERE DISOBEDIENT, when once the Divine longsuffering waited in the DAYS OF NOAH, while the ark was being prepared, in which a few, that is eight souls, were saved through water.”

GOD INHABITS THE PRAISES OF HIS PEOPLE!

Wait. What? I thought this article was about you-know-who; you know…..the one God tossed out of heaven. How does praising the Lord fit in here?  Yes, these verses are about the demons who refused to keep their place. They may not seem to be related to the subject at hand, but trust me: They are!

This passage is about the demons who fathered the half demon/half human Nephilim before the flood and the post diluvian versions:  The Anakim and Rephaim. Goliath was one of the them.   Let’s see how praising God fits in!

The Bosom Of Abraham.

After Jesus died, He descended to Paradise.  This is known to the Jews as the “Bosom of Abraham.”  He went there to free the saints of the Old Testament who had looked forword to this great day, the Day that Jesus conquered EVERYTHING. While He was there, He confronted the aforementioned outlaw spirits.

Two Sides Of Sheol.
Sheol, or the grave, had two sides at one time.  One side was called. “Paradise.”  Those who lived before Jesus came but believed the gospel went there when they died.  A great, impenetrable gulf exists betwee Paradise and the suffering side which is called, “Hell.”  Those who rejected the gospel ended up there.

–
(For more on this topic, follow this link:
http://emmausrevelations.blogspot.com/2014/07/promissory-notes-passover-series-part-4.html)

Jesus PROCLAIMED to those demons who refused to keep their place, “You tried to stop Me but I AM HERE.  You Failed!” (Paraphrased)

The Great White Throne Judgment will happen when Jesus comes back to earth. However, because what these demons did was so heinous, they were judged early according to Jude 1:6
“…the angels who did not keep their proper domain, but left their own abode, He (God) has reserved in everlasting chains under darkness for the judgment of the great day;”

(For more on this topic please follow this link:
http://emmausrevelations.blogspot.com/2015/01/as-it-was-in-days-of-noah-flood-series.html).

The Battle Of The Universe.

The entire battle of the universe rages around this one event: THE CROSS, where Jesus crushed the head of the great dragon! When He returns to earth, He isn’t going to rule the whole world from Paris or London or New York:  He’s going to rule from His city, His capitol:  JERUSALEM.

–
This is why Israel and the Middle East is always in the news, like a boiling cauldron of unrest. That old serpent is trying to prevent the second coming so he won’t be completely destroyed. It’s also why you, Christian, are attacked, why the devil hates mankind, and why there are so many hospitals, sickness, death.

This great war began long ago when Lucifer wanted to be like God. When he was cast down from heaven, he took 1/3 of the angels with him. That means that the good Angeles OUTNUMBER the evil ones 2 to 1!

But before his exit, Lucifer was THE WORSHIP LEADER of all the angels; the heavenly “Minister of music,” if you will. Pipes and musical instruments were actually built right into him, the Bible says. His whole body was like a musical instrument. That is why today he uses music to attract and lead astray into rebellion, drugs, alcohol, you name it. It is a very powerful medium. 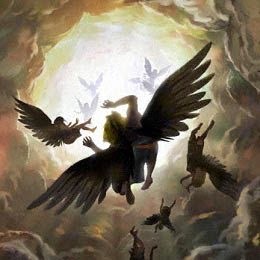 Now, not all music is evil; GOD’S MUSIC IS GREATER! God’s music is FAR MORE POWERFUL!!! HALLELUIA!!!  Remember, Lucifer cannot create; he can only pervert and counterfeit. He is “creatED;” Not creatOR!

–
Our God inhabits the praises of His people. The more and greater praise we sing an shout to Him, the more the devil hates it! He cannot stand it. He has to FLEE!!!

Doesn’t that give you even greater motivation to SING PRAISES TO OUR GOD?! Yes: HE INHABITS the PRAISE OF HIS PEOPLE!!!