“Now THE PHILISTINES HAD STOPPED UP ALL THE WELLS which his {Isaac’s} father’s servants had dug in the days of Abraham his father, and they had filled them with earth. 16 And Abimelech said to Isaac, “Go away from us, for you are much mightier than we.”
17 Then Isaac departed from there and pitched his tent in the Valley of Gerar, and dwelt there. 18 And ISAAC DUG AGAIN THE WELLS OF WATER which they had dug in the days of Abraham his father, for the Philistines had stopped them up after the death of Abraham. He called them by the names which his father had called them.” 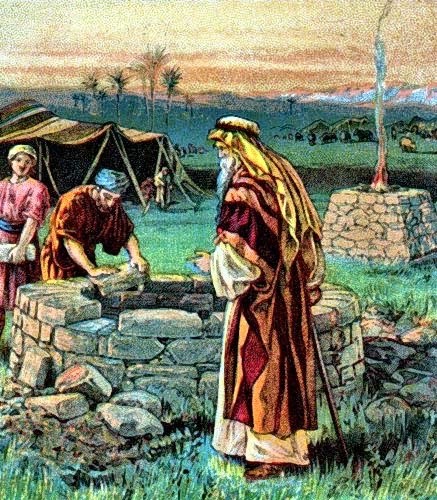 Those annoying Philistines.  They seem to have nothing better to do than to cause trouble and start fights.  They even stopped up the wells of water that Abraham built with dirt.

Origin Of The Philistines.

Who were these troublesome folk anyway?  They sure gave the children of Israel a run for their money. A real thorn in their sides.
They were descended from Noah’s son, Ham.  He had a son named “Mizraim” which is the Hebrew word for “Egypt.”  The word itself means, “Striving.”
Mizraim had a son named “Casluhim.”  Interestingly enough, in Hebrew this word means “FOOLS.”  That’s right, folks: This guy was the father of a race of casluhim:  FOOLS.
–
Typologies.
At the end Israel’s desert wanderings they entered at last into their Promised Land. They had passed through both the Red Sea AND the Jordan.  These two crossings depict Jesus’ death on the cross and His resurrection, respectively.  It’s a typology of the new birth!
–

(Map of Israel’s wanderings and entrance into the Promised Land.)

Unlike the Israelites, when the Philistines came to Canaan from Egypt (a depiction of the world), they didn’t go through the Red Sea OR the Jordan.  They came straight from Mizraim and entered via the Gaza Strip. In other words, they bypassed everything:  The Red Sea and the Jordan.  Jordan, in Hebrew, means “River of judgment.”

They didn’t get in with God’s help as Israel did; they got in my their own efforts, or “Mizraim: strivings.”  They were fence-jumpers, so to speak.  They are a picture of self-righteousness.
–
Hidden In The Old.
As most of you know, the New Testament is hidden somewhere in the Old in stories, names, places, pictures, even numbers recorded there.  Nothing you read, not one single word, phrase, or number is there just to make the Book thicker.
–
The above scenario is a portrayal of this passage in John 10:1-2, which says, “Most assuredly, I say to you, he who does not enter the sheepfold by the door, but climbs up some other way, the same is A THIEF AND A ROBBER.  But he who enters by the door is the shepherd of the sheep.”
–
Pretty good description of “Fools,” isn’t it?
–
Then there’s the verse in Psalm 14 that states, “The fool hath said in his heart, ‘there is no God.'”  They don’t think they’re bad enough to need a Savior.  It’s like saying, “I don’t need the blood of The Lamb.”  But as you know, without the shedding of blood, there is NO forgiveness of sins.
–
The word, “Philistine” itself means ” To wallow in the dust,” hence the Holy Spirit’s mentioning of them filling the wells with dust.  Another good description!
–
Holy Spirit Pictures.
The Holy Spirit is drawing pictures for us again to illustrate spiritual truths, especially this very important one:  Our sins have been completely cleansed by the perfect blood of the Perfect Sacrifice, Jesus.  He says so. We have passed through the Red Sea–THE BLOOD–having died with Christ, and we have been raised to newness of life–we have passed through the Jordan, the “river of judgment,” from death unto life!  Passing through the Jordan means “
ALL JUDGMENT IS BEHIND US!!”
–
Just as Jesus died and rose again, so you and I, Church, have died with Him and been resurrected WITH HIM to newness of life.  The Holy Spirit is demonstrating that we will NEVER, EVER AGAIN suffer judgment of any kind from God in either in this world or the next. Why?

BECAUSE IT WOULD BE UNJUST TO JESUS WHO WAS PUNISHED IN OUR PLACE!

Many people of the world today, modern-day Philistines, try to circumvent the cross.  They try to enter God’s kingdom by some other way, not believing there is a debt of sin that we owe or a Savior Who paid for them with His blood.  Jesus, to them, is merely a great teacher; perhaps a great prophet or a wise philosopher. He was a good, moral example to follow….but not SAVIOR.  Never Savior.

It is those to whom Jesus will say in that day, “Depart from me.  I NEVER knew you.”
They may have called themselves, “Christian,” but they were never saved.
–
Have you heard ever heard any preaching on that verse from Matthew 7?  You may have been misinformed that, if you don’t measure up, you might lose your salvation and, at the Great White Throne judgment, you could be relegated to everlasting punishment.  That is not only a cruel statement, IT FLAT OUT ISN’T TRUE!!!
–
Church, if you have asked Jesus to come into your heart, even as a small child, but somehow fell away, Jesus could never say to you, “Depart from me, I NEVER knew you.”
–
In Titus it says “God CANNOT LIE.”  That being a fact, He would in truth have had to say to you, “Depart from me, I don’t know you any more,” to be accurate, correct?
–
No way He could be addressing anyone who has the sinless blood of the perfect Lamb of God on the doorposts of their heart.  Once you are saved, YOUR SALVATION CAN NEVER BE UNDONE according to John 10 and many other passages.
–
Jesus is obviously addressing those who have NEVER accepted His free gift of righteousness.  They are not saved.  NEVER WERE.  He Who can look on the heart, something you and I cannot do, knows definitively who is born again and who is not.  Trust that.
–

–
Samson And Delilah.
Getting back to the Philistines, Samson, among others, was constantly locking horns with them.  Remember the Philistine woman, Delilah, that he married?  She was a real drag.  When it came to asking him what gave him his great strength, she was like drippy faucet.  Her name, very appropriately, means, “Wearisome,” in Hebrew.  You know, a “NAG?”  Apt description.
–
Women in the Bible can represent many different things.  Sometimes they typify the Church, sometimes Israel, or in Delilah’s case, she is a typology of seducing false doctrines of the devil.  Again, apt description.
–
Philistine women were very beautiful and alluring, like seducing doctrines which appeal to our flesh.  By “Flesh” I don’t necessarily mean carnal pursuits, though they is certainly included.  Most often it refers to mankind who just loves to think there is something he can “DO” to please God, believing their “DOING” counts for something.  Here we go again with that old righteousness by works thing.
AS IF!
–
Church, our righteousness is as filthy rags!
–

Remember Goliath, David’s giant?  He was a Philistine from the city of Gath, one of those freaky, post-flood outbreak of human/demon hybrids.  That may be a new concept for you.  Don’t feel bad; you’re not alone.  If you’d like to know more on that topic, feel free to follow the link below:

https://emmausroadministries.wordpress.com/2016/04/14/as-it-was-in-the-days-of-noah-flood-series-part-7-of-8/.
–
Goliath in Hebrew means “Stripped exile.”  You know, if you wanna really feel beat down, ground to a pulp, and totally worthless, listen to the booming voice of the modern-day version; you know, the hell-fire and damnation set.  They’ll make you feel just like that:  A stripped exile, wallowing in the dust, totally debased, fearing an angry God Who is just waiting to smack you down at the slightest infraction of His law.
–

Now, of course, no one is advocating lawlessness. In truth, the strength of sin is the law.  GRACE IS THE ANTIDOTE.

The Holy Spirit is saying that ANYONE who teaches doctrines that A.) BYPASS the cross; B). Tell you that you can only receive blessings in your life by your own efforts or some formula; OR C). That by your law-keeping you can please God, is teaching the seducing doctrines of the Philistines.
These things appeal to our flesh because man always wants to think there is something he can DO to be acceptable to God.
–
The devil LOVES it when this kind of thing is preached.  These preachers, sadly, are inadvertently doing his work for him, meaning to do the right thing.
–
It’s so much better and more productive for us to focus on the WELLS OF REFRESHING FROM GOD’S WORD not stuff our people up philistinian doctrines, i.e. “Dirt.”
–
Those foolish Philistines came in and covered up all the wells that Jacob had dug.  Do you know who came and UNcovered them?  Isaac, who’s name means, “Laughter!”  He’s a picture of GRACE, the REAL gospel!
–
Isaac you remember, according to Galatians 4, was the child of of Sarah.  She is a picture of the New Covenant of Grace.  He was not the son of Hagar, who is a typology of the law.  Where “Grace” goes there is fun, music, dancing and “LAUGHTER!”
–
Grace always serves up the refreshing water of the word of God to the people. There is laughing, singing, dancing and fun……LIFE, something Law-centric people seem to completely lack, misunderstand and misconstrue.
–

These false doctrines are so alluring because they appeal to our human intellect.  Some actually sound pretty good. They focus on YOUR discipline, YOUR efforts, even “Christian” religion.  But you can be “RELIGIOUS” and not be “SPIRITUAL.” In fact, if you ARE one, you ARE NOT the other.
–
Jesus’ Biggest Problem.
This “Spirit of Philistine” was present in suffocating concentrations in the Pharisees of Jesus’ day.  It was His biggest problem.
–
He reserved His most scathing rebukes for them, too, calling them “Hypocrites, whited sepulchers and a brood of vipers.”  You NEVER heard Him talk like that to the sinners, harlots and tax collectors.  NEVER!
–
The Philistines and Pharisees of today are still trying to cover up those wells. They think they can come against the REAL GOSPEL by covering up the wells of refreshing that only those wells can deliver.  They even go so far as to call it “Heresy.”
–
Be very, VERY CAREFUL.  What is of God CANNOT BE OPPOSED.  Anyone who ever tried it……uh…..well…..let’s just say it didn’t end well.
– 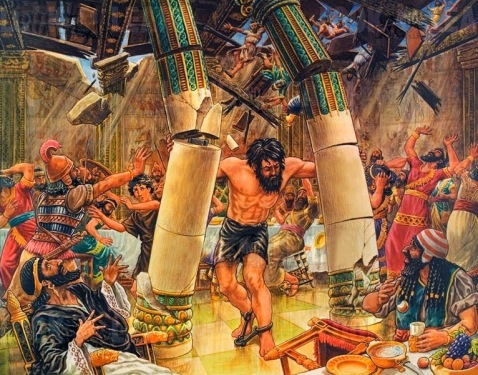 THANK YOU, DADDY!  We love You so much because of Your wonderful provision for us in the Wells Of Refreshing!

One thought on “The Wells Of Refreshing”