–
In Part 2 we saw that, amazingly, as if it were an entity, the land of Israel responded to all the murders and lawlessness with famine.  But in spite of all that, God overrode it and gave bread again to Bethlehem, the House of Bread!

While she was living in that foreign land, Naomi heard of this turn around and decided to go back home.  On their journey there, she had a little talk with her daughters-in-law, Orpah and Ruth.  Let’s follow the story.

Naomi’s Advice.
Ruth 1:8-10 “Go, return each to her mother’s house: the Lord deal kindly with you, as ye have dealt with the dead, and with me. 9 The Lord grant you that ye may find rest, each of you in the house of her husband. Then she kissed them; and they lifted up their voice, and wept. And they said unto her, Surely we will return with thee unto thy people.”
–
Both, at first, had in mind to return with Naomi to Bethlehem. But she admonished the women to return to their own people.  There was no way she was going to be able to provide husbands for them and she wanted them to be taken care of.

They were not happy about it.  So, Naomi spoke to them again, saying these words in verses 11-15:
–
“11 And Naomi said, Turn again, my daughters: why will ye go with me? Are there yet any more sons in my womb, that they may be your husbands? 12 Turn again, my daughters, go your way; for I am too old to have an husband. If I should say, I have hope, if I should have an husband also to night, and should also bear sons; 13 Would ye tarry for them till they were grown? would ye stay for them from having husbands? nay, my daughters; for it grieves me much for your sakes that the hand of the Lord is gone out against me.
14 And they lifted up their voice, and wept again: and Orpah kissed her mother in law; but Ruth clung unto her. 15 And she (Naomi) said, Behold, thy sister in law is gone back unto her people, and unto her gods: return thou after thy sister in law.”

Wow!  Naomi was really sad and depressed.  That’s quite a pity party she was having for herself.  You can tell by what she said of the Lord: “His hand had gone out against me.”

It’s quite understandable, of course.  After all, she had lost her husband and her two sons.  In those days, if a woman had no man to provide for  her, she was in the most desperate of situations.  She could either beg, glean in a stranger’s field, or resort to the oldest profession:  Prostitution.

The original Hebrew of her statement above is very revealing here.  The word she used for, “Lord,” is “Shaddai.”  That Name of God is the Nurturing One; the One Who cares for you like a mother hen.   Obviously, she’s not very familiar with Him.

Her statement, however, was spoken out of ignorance.  She didn’t realize that her problems were not from God.  No!  They were, in fact, a result of her and her family not trusting Him and from taking matters into her own hands. 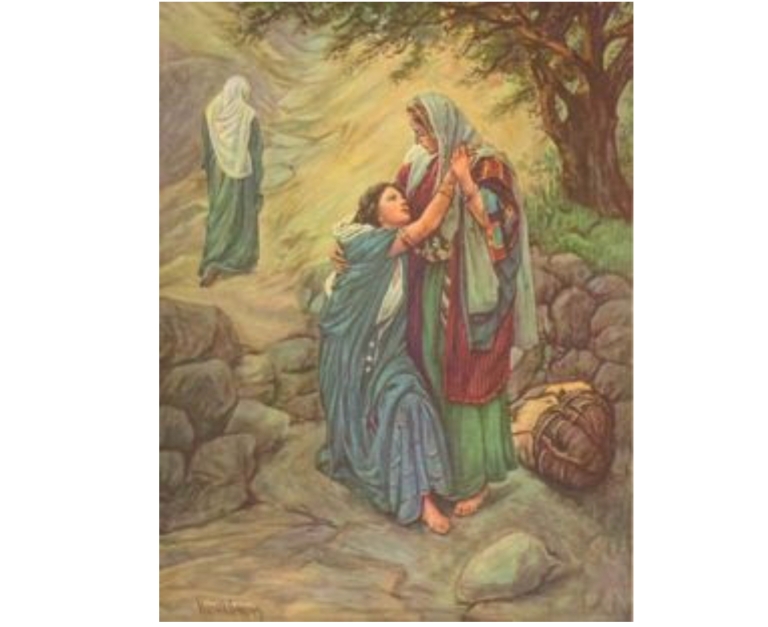 Orpha Turns Back.
Orpah decided to take her mother-in-law’s advice, returning to her homeland and to her gods.  She, like Ruth, could have stayed and been grafted into the “Jewish tree,”…..but she chose not to. She made a conscious decision to turn her back and walk away.  This is a picture of those who are unsaved.  They will suffer eternal punishment, having made a conscious choice to turn their backs on their only hope:  The God Who saves.
–
Not Ruth. She was determined to stick with Naomi.  Look at the beautiful words she spoke to her, which are so full of love and loyalty, they are often used in wedding ceremonies.
–
Ruth’s Confession.
Ruth 1:16-17
“Entreat me not to leave you,
Or to turn back from following after you;
For wherever you go, I will go;
And wherever you lodge, I will lodge;
Your people shall be my people,
And your God (Elohim), my God (Elohim).
17 Where you die, I will die,
And there will I be buried.
The Lord (YHVH) do so to me, and more also,
If anything but death parts you and me.”
–
In the original Hebrew, you can tell that Ruth not only knew Who “Elohim (Creator God),” was: She also knew the Covenant-Keeping One: YHVH. No doubt she had listened closely as Naomi told her wonderful stories about this God of Israel; stories of Abraham, Isaac, Jacob, and Joseph.  Somewhere along the way, she fell in love with Naomi’s God, for when she said, “Your Elohim shall be my Elohim,” He took notice of it and blessed both her and Naomi!

You and I are just like Ruth! From whom did we learn about all the God of the Bible? From the Naomis: the Jewish people! The Bible is, after all, a Jewish book, and Jesus came into the world as a Jew. We owe them everything!
–
Please proceed to Part 4 where we’ll be talking about the women’s return to Bethlehem and what awaits them in the land of Promise!