“3a And to the children of Israel you shall speak, saying, ‘Take a kid of the goats as a sin offering…”  “15 Then he brought the people’s offering, and took the goat, which was the sin offering for the people, and killed it and offered it for sin, like the first one.”

This has got to be one of the strangest creatures in this heavenly story.  Here we see, once again, two completely different species incorporated into one:  The head and upper body of a goat and the tail of a fish.

Capricorn is the opening scene of Act 2 in this three-act play.  It introduces us to the Resurrection Life we receive from the One Who gave His life for all of us:  Jesus!

This constellation is a picture of a goat with its head down, one leg tucked underneath as though injured.  Its body culminating in the tail of a fish.  These two creatures combined into one depict the dual nature of God’s Great Champion, Who is both God and Man.

Goats in ancient Israel, as ordained by God, were sacrificed to atone for sins.  The animal was carefully prepared according to God’s instructions, and offered on the altar, reminding Him of what Jesus would do in the distant future.  This part of the animal portrays Jesus’ dying on the cross for us so that we might have eternal life with Him.

The foot is tucked under as though injured reminding us that Jesus was injured in saving all of us.  He bruised His heel in crushing our enemy, the devil.  But why does it end with the tail of a fish?

Whereas the goat was symbolic of Jesus’ sacrifice, the fish is a symbol of the Church. It brings to mind the scriptures below:

Matthew 4:18-19  “And Jesus, walking by the Sea of Galilee, saw two brothers, Simon called Peter, and Andrew his brother, casting a net into the sea; for they were fishermen. Then He said to them, “Follow Me, and I will make you fishers of men.”

Mankind is clearly being compared to fish here.  He also said in John 3:5 the following:  “Most assuredly, I say to you, unless one is born of water and the Spirit, he cannot enter the kingdom of God.

Fish are creatures that are born in water.  They live in the sea, which is a typology of the nations of the world.  Even in the Hebrew Language we see this fish symbolism.  Their letter, “Nun: [ו],” means “Fish,” and symbolizes the believer!

2 Corinthians 5:18-19  “Now all things are of God, who has reconciled us to Himself through Jesus Christ, and has given us the ministry of reconciliation, that is, that God was in Christ reconciling the world to Himself, not imputing their trespasses to them, and has committed to us the word of reconciliation.”

We are told to go into all the world and preach the Gospel, and to reconcile the world to God.  That is our primary task:  The ministry of reconciliation, NOT JUDGMENT.

Think about it:  When you go fishing, you don’t grab your fish with your net, yell at it or berate it for being a bad fish, or point out that other fish that are better than it.  No.  You simply load your hook with the appropriate bait, cast it out into the water, reel it in when the fish takes the bait, scoop it up into your net, and toss it into the boat. 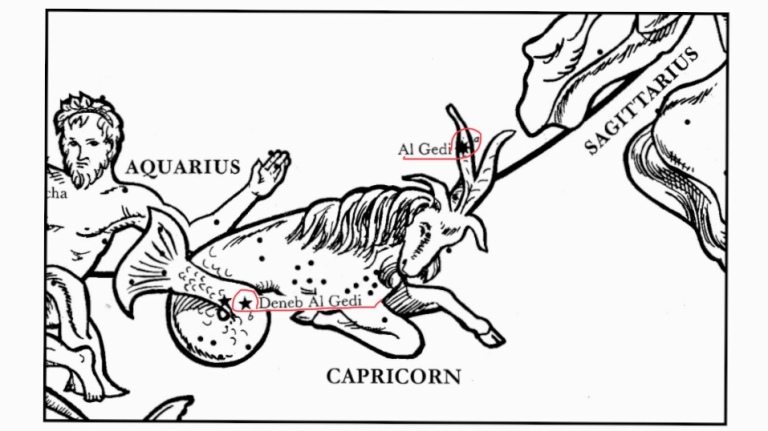 The Hebrew name for this major constellation is “Gedi” which means “Kid” or “Cut off,” as Isaiah 53:8b says:  “For He was cut off from the land of the living;
For the transgressions of My people He was stricken.“

The name, “Capricorn,” by which this sign is known today, came to us from the Romans.  They called it, “Capricornus,” which means “The Goat.”  The Arabian and Syrian peoples were also familiar with this star grouping.  They called it “Gedi” like the Hebrews.

As usual, the Egyptians had a completely different take.  They called it, “Hupenius, The Station of Bearing (or the Place of Birth).”  This is not quite the meaning one would expect.  But out of Jesus’ death came life:  He birthed the Church!  It brings to mind the scripture in John 12:20:

“Most assuredly, I say to you, unless a grain of wheat falls into the ground and dies, it remains alone; but if it dies, it produces much grain.”

Many ancient names of the stars have been preserved for us, though not all of the locations of these stars are known.  The brightest star, located in the left horn, is called, “Al Gedi” (Arabic).  It means, “The Kid or Goat.” Another star for which we have a name is “Denib Al Gedi.”  Also an Arabic name, it means “The Lord, Judge, or Sacrifice Cometh, it is located in the tail of the fish.  (See picture above.)

There are several other stars for which we have names.  Though their positions are uncertain, their meanings are illuminating.  They are all from the Arabian people:  Al Dabih, The Sacrifice Slain; Al Dshabeh, The Slaying of the Sacrifice; MaAsad, The Slaying, The Destroying; and “Sa’ad al Naschira, The Record of the Cutting Off.”

The message is clear:  Jesus was cut off from the land of the living, dying a death we should have had to die.  In dying, He gave birth to the greatest institution of all time: The Church.

Jesus is the first born among many brethren and,because of Him, we now have access to God.  We will live and reign with Him for all eternity!

Follow the link below to part 14.  We’ll continue this amazing story in the Decans of Capricorn, beginning with Sagitta: The Arrow: