“Now I saw heaven opened, and behold, a white horse. And He who sat on him was called Faithful and True, and in righteousness He judges and makes war.”

In Pegasus we see another creature that has never existed in nature.  Like others in this story in the stars, it is a combination of two different species that have two different planes of existence:  A horse that is earthbound and a bird that lives in the heavens.  That’s our Jesus!  He has a dual nature.  He is 100% God and 100% man.

Unlike the other constellations depicting Jesus’ dual nature, this creature has no sign of death anywhere and is flying effortlessly through the heavens.  There is not a whole lot we glean simply from the lore of this figure.  But the individual stars speak volumes! 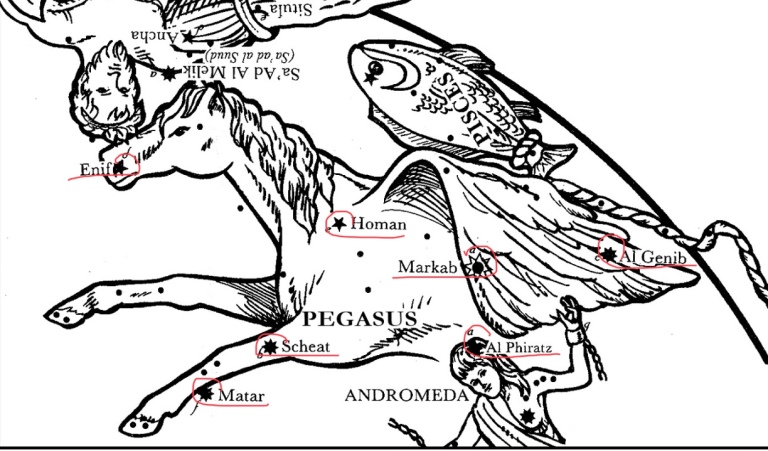 Both the Greeeks and Romans called this sign, “Pegasus,” which means “Coming quickly, Joyfully.”  What does that sound like?  The promise of the second coming!  We’ve seen this in previous star names that speak of Jesus returning to this earth.  God reiterates that promise in Pegasus.  Let’s check out the names of the stars in this constellation.

The brightest star, in Hebrew “Markab,” is located in the forward edge of the left wing.  It means, “Returning from afar.”  The second brightest star, also bearing a Hebrew name, is “Scheat.”  We have seen this name before in both Capricorn and Aquarius.  It means, “Him who goes and returns.”

The third brightest star has an Arabic name:  “Al Genib: Who carries.”  It is located on the trailing edge of the left wing of this improbable creature reminding us that Jesus bears us up on “Eagle’s wings.”

Continuing down the brightness scale we come to the fourth brightest star called, in Hebrew, “Enif:  The Branch,” located on the creature’s nostril.  It reminds us of the verse in Jeremiah 23:5 which says, “Behold, the days are coming,” says the Lord,
“That I will raise to David a Branch of righteousness;
A King shall reign and prosper,
And execute judgment and righteousness in the earth.”

Jesus is that Branch!

The next star in order of brightness, “Homan,” means, “The Water.”  As listed in modern astronomy books, it is given the Arabic meaning:  “The Great King.”  It is located on the shoulder of Pegasus.

Another star carrying an Arabic name is, “Matar,” meaning “To cause to overflow.”  It follows along with the meaning of the previous star, “Water.”  As you know, water is a type of the Word of God as well as of His blessings.  Matar was considered by ancient Arabs to be “The rain star,” often called, “The lucky star of the rain.”

Another star with a less ancient name is “Bilham:  Flock of goats or kids.”

Are you sensing a pattern here?  This message is interjected and reiterated over and over that this great Champion, Who suffered and died for all mankind, paid for every sin, conquered death and went back to heaven.  He is called, “The Branch, a Great King,” who went away but is returning from far away.”  He carries Water, will cause blessings to the ones who receive that water to overflow.  He is coming quickly!  That coming is coupled with great Joy, accompanied by a flock of kids or goats.”

What does all that sound like?  Jesus’ promise of both the rapture AND the second coming with His Church in tow!  It’s a perfect portrait of 1 Corinthians 15:50-54, which you can read at your leisure.

Church, it’s clear that we can look forward to a GREAT HOPE in Jesus calling for His church to rapture us out of this world before judgment is unleashed on all the ungodly of this planet!

You may follow the link below to part 19 where we’ll learn about Cygnus, the Swan: