(Jewish people flee the destruction of
Jerusalem by Rome in 70 A.D./Tish B’Av)
–
The Ten Days of Repentance are the first ten days of the Hebrew month of Tishrei.  It usually occurs sometime in the month of September or October, beginning with the Jewish holiday of Rosh Hashanah and ending with the holiest day of the year: Yom Kippur, The Day of Atonement.  It is a time to get closer to God by returning to Him in true repentance to be renewed, rebuilt, and restored.
–
T’shuva  means “Return or repentance.”  Torah study begins at sunset of the 1st day and ends at sunset 10 days later.  Rosh Hashanah 2019 was on September 30th and October 1st. Yom Kippur will fall on Wednesday, October 9th.
–

40 days before Yom Kippur is the 17th of Tammuz on the Jewish calendar.  This date occurred on July 8th, 2019 on our Gregorian calendar.  This day, the Jewish People bring to remembrance  a tragic “Coincidence.”   In both 586 BC and in AD 70, the walls of Jerusalem were breached by the Babylonians and the Romans, respectively.

In yet another remarkable “Coincidence,” the First and Second Temples were destroyed by the Babylonians in 586 BC, and by the Romans in AD 70 three weeks later on the 9th of Av.

Ask any of your Jewish friends about this date.  The 9th of Av is a VERY evil day in their history.  You may follow the link below to read all about the original one, what happened, and how it became so.  Down through their history, so many evil things have happened to them on this date that there is no way it could be mere coincidence 😓

This has historically been a day of mourning in Israel. 😭  The LORD, through Jeremiah, admonished His people,  “Have you not brought this on yourselves by forsaking the LORD your God when He led you in the way?”  (Jeremiah 2:17)
–

In Judaism, the breach of Jerusalem’s walls and the subsequent destruction of the Temple are considered no mere coincidence.  These great tragedies were the result of rebellion and idolatry:

“And in that day I will become angry with them and forsake them….  Many disasters and calamities will come on them, and in that day they will ask, ‘Have not these disasters come on us because our God is not with us?’  And I will certainly hide my face in that day because of all their wickedness in turning to other gods.”  (Deuteronomy 31:16-18) 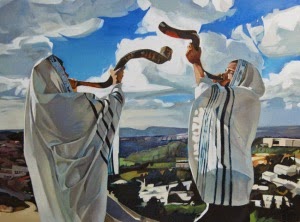 Days Of Reflection And Hope.

Observant Jews fast this day until nightfall in order to mourn the breach of Jerusalem’s walls.  It is also the beginning of a three-week period of t’shuvah (repentance) called “Bein ha-Metzarim: Between the Straits,” or “The Three Weeks.”  During this period, Orthodox Jews will limit celebration; not carrying out marriages, and avoiding other expressions of joy, such as playing musical instruments and reciting songs of praise.

Although this is a time of mourning, it is also a time of hope since Zechariah prophesied that the 17th of Tammuz would be transformed into a day of joy.
“The fasts of the fourth, fifth, seventh and tenth months will become joyful and glad occasions and happy festivals for Judah.  Therefore love truth and peace.”  (Zechariah 8:19)

The Ten Days of Repentance-the Days of T’shuvah [עשרת ימי תשובה], pronounced “ah-SEH-reht ye-MEYH te-shoo-VAH,” is the period starting from Rosh Hashanah, “Head of the year, or New Year’s Day,” and running all the way through Yom Kippur which, as I said, is THE HOLIEST DAY of the year to the Jewish people. The Day Of Atonement and the days leading up to and including it are called “The Days of Repentance: “T’Shuvah.”

What usually comes to mind when you hear the word “repentance?”  Someone beating their breast, falling on their face or knees and pouring out a list of their sins to God in great sorrow?  Probably.  In any event, it’s not a “positive” image.  By that I mean the person is very sorrowful.  Dictionary.com defines it like this:  To feel sorry, self-reproachful, or contrite for past conduct; regret or be conscience -stricken about a past action, attitude, etc., But is that scriptural?

Secrets In The Hebrew Letters.

Since it is its own best commentary, let’s see how the Bible defines it.  T’Shuvah is spelled like this in Hebrew:

Hebrew reads from right to left and is a form of picture writing, like Chinese.  These pictures are very consistent. The letters God uses to form words give us a glimpse of God’s perspective and meaning that we would never find in any definition.

In modern-day Israel, when a mother calls to her child to come or “return” home, she cries out “shuv-return!”

The middle three letters of the above word spell “[שרב]: shuv.” Add the “tav [ת]” and the “hei[ה]” and it becomes the word “repentance.”
Tav means “cross;” shin-vav-bet” spell “Shuv-return,” and “hei” is Grace. It means, literally, “Return, or turn back, to God; RETURN TO GRACE!”

But I see something else as well.  The word begins with the letter “tav [ת] -cross.”  Repentance begins with an understanding of what Jesus did AT the “cross” FOR us.  This realization “changes our minds,” {we metanoiá} which is what repentance really is, and makes us want to “shuv: turn back” to Him and receive His wonderful “hei,” His “grace.”  In actuality, JESUS IS GRACE!

First the cross; then we turn–change our mind (repent); then He gives us His grace. AWESOME!!!

The Greek word for repentance, “Metanoia,” simply means, “Change your mind.” Change the way you were thinking about God and His grace.

I can just hear it now…..”Oh you ‘grace preachers.”  “Grace is fine but you need to preach more REPENTANCE!”   Quite predictably, their idea of “repentance” isn’t really repentance at all but “sin-consciousness.”
–
News flash:  GOD DOES NOT WANT US TO HAVE SIN CONSCIOUSNESS!  Jesus’ ONE SACRIFICE was MORE THAN ENOUGH to cleanse your entire life from the very instant you were born again.
–
Hebrews 10:1-3
“10 For the law, having a SHADOW of the good things to come, and NOT THE. VERY IMAGE OF THE THINGS, can never with these same sacrifices, which they offer continually year by year, make those who approach perfect.
2 For then would they not have ceased to be offered? For the worshipers, once purified, would have had no more consciousness of sins.
3 But in those sacrifices there is a reminder of sins every year.”
–
The shadow covenant kept people mindful of their sins.  But it’s crystal clear that God found fault with the Ten Commandments.  (See Hebrews 8.)
–

Repentance is actually going on all the time.  Every time you go to church and hear the truth about our Lord Jesus.  When you listen to anointed preaching you “Metanoia;” you change your mind, and think right.  In other words, you “repent!”  It isn’t something that has to be especially preached about or taught. The more Jesus is unveiled, the more you behold Him, the more like Him you become; the more you “Metanoia:  repent!”

It’s as simple as that. It really is……and the more that Jesus’ beauty and Grace are unveiled, THE MORE ATTRACTED TO HIM OUR CHILDREN AND YOUNG PEOPLE WILL BE!  It is Grace that will win them over, NOT LAW.

It is Grace is that will cause the dominion of sin in the church and in the world to cease: NOT LAW.

It is GRACE THAT WILL LEAD THEM HOME!  Only Grace, PURE GRACE, leads to true REPENTANCE:  T’SHUVAH: תשובה