Revelation 2:8-11  “And to the angel of the church in Smyrna write,
‘These things says the First and the Last, who was dead, and came to life: “I know your works, tribulation, and poverty (but you are rich); and I know the blasphemy of those who say they are Jews and are not, but are a synagogue of Satan. Do not fear any of those things which you are about to suffer. Indeed, the devil is about to throw some of you into prison, that you may be tested, and you will have tribulation ten days. Be faithful until death, and I will give you the crown of life.
“He who has an ear, let him hear what the Spirit says to the churches. He who overcomes shall not be hurt by the second death.” ’
– 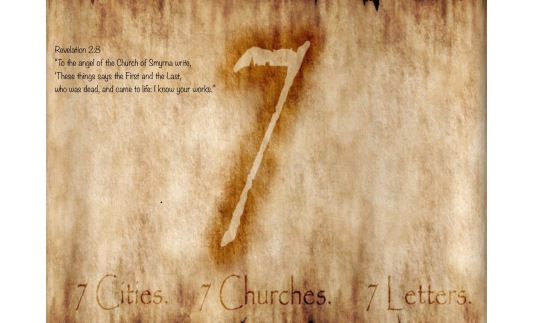 –
The letter to the “Angel,” or messenger, of the Church of Smyrna, is the second of the seven Churches addressed.  This pastor, along with the leader of the Church of Philadelphia, received no rebuke or correction, each for different reasons.
The believers of Smyrna were under persecution that was about to get worse to the point that some would even be thrown in prison.
–
Encouraging Words.
Jesus only offered words of comfort and encouragement, assuring His flock that they, as believers identified with Him, were overcomers.  They did not have any fear that they would be hurt by the second death. Jesus told them not to fear what man could do, which may well have brought to mind the His words recorded in Matthew 10:28-31:
–
“…Do not fear those who kill the body but cannot kill the soul. But rather fear Him who is able to destroy both soul and body in hell. Are not two sparrows sold for a copper coin? And not one of them falls to the ground apart from your Father’s will. But the very hairs of your head are all numbered. Do not fear therefore; you are of more value than many sparrows.”
–
Smyrna.
Smyrna was a city in Asia Minor, in present day Turkey.  The name occurs only once in the Bible, right here in the Book of Revelation.  Jesus’ words to them are filled with great affection and joy that comes from triumph over hardship and persecution.  They faced strong Jewish opposition in their town as there were a considerable number of Jews in the city.

Notice how Jesus describes them:  “I know the blasphemy of those who say they are Jews and are not, but are a synagogue of Satan.”  Pretty strong words!  They may have been of Jewish descent but they certainly were not serving the Most High.  That’s the way it is with the self-righteous who set themselves as “defenders of God’s holiness.” Looks like the only thing they were doing was heaping guilt and destruction on themselves. 😓
–
Myrrh.
In Jesus’ message to their leader, 👉🏻 twice He makes reference to His resurrection in chapter 2, verses 8 and 11. This is no accident.  You see, all names in the Bible have meaning.  Though scholars may differ somewhat on the root word from which Smyrna is derived is, most have settled on the noun, “Smurna,” which comes from the Hebrew and Aramaic word מר or מור (mor), meaning “Myrrh.”  More on this later on.

–
Myrrh is a depiction of Jesus’ suffering and death on the cross.  This is especially showcased in how it is made and how it was used.  The description paints a very graphic picture of Him.
–

(Commiphora myrrha tree, one of the primary trees from which myrrh is harvested.)

–
Harvesting Myrrh.
This is one of the spices brought to Jesus by the wise men from the East when He was about 2 years old.  It is a natural gum or resin extracted from a number of small, thorny trees. Its resin has been used throughout history as a perfume, incense, and medicine. Myrrh mixed with wine can also be ingested. Look at the description below of how it is harvested.
–
“When a tree’s wound penetrates through the bark and into the sapwood, the tree bleeds a resin (their words). When people harvest it, they wound the trees repeatedly to bleed them of the gum.”

(Those are not my words but the industry term from those who engage in gathering the sap or resin).

“Then the bark is “Pierced” so that it will “Bleed” the sap so it can be used in perfume, incense, and even medicine.”

–
Healing Myrrh.
Myrrh has been used as an antiseptic in mouthwashes, gargles, and toothpastes.  It is also used in some linaments and healing salves that may be applied to abrasions and other minor skin ailments. Myrrh has also been recommended as an analgesic for toothaches and can be used in linament for bruises, aches, and sprains.  It is a common ingredient of tooth powders. Myrrh and borax in tincture can be used as a mouthwash. A compound tincture, or horse tincture, using myrrh is used in veterinary practice for healing wounds.  It is also commonly used to treat indigestion, ulcers, colds, cough, asthma, lung congestion, arthritis pain, even cancer.

What does all that information have to do with the subject at hand? Simply this: It brings to mind Isaiah 53:5 which says, “But He was wounded for our transgressions, He was bruised for our iniquities; The chastisement for our peace was upon Him, And by His stripes we are healed.”
–
Myrrh was the main ingredient in the anointing oil that Moses used to sprinkle the Tabernacle.  In so doing, it became prominent not just visually but the perfume of Myrrh gave it a sweet aroma.  This anointing oil was used to anoint priests, prophets, and kings.
–
Oil Of Joy!
It became known as the “Oil of Joy” with which God anointed the righteous.  Mostly, it became associated with the consummation of marriage.  Esther, for instance, bathed in myrrh for 6 months before presenting herself to the king.  Solomon sprinkled his bed with myrrh and invited the Shulamite to drink their fill of love until morning.
–

–
Secrets In The Hebrew Language.
As indicated earlier, it is not uncontested where the name Smyrna might come from. It appears to be an adaptation from an ancient word, but it’s not known for certain from which word the name is derived and what it might have meant. But the adaptation upon which finally was settled is identical to the noun σμυρνα (smurna), which comes from the Hebrew and Aramaic word מר or מור (mor), meaning “Myrrh.”

The word, “Myrrh,” comes from the Hebrew verb “Marar,” which means, “To be bitter.”  Hebrew audiences, however, associate the idea of bitterness not only with grief but also of strength.  A bitter-tasting dish is often said to have a “strong taste.“
The Ugaritic, Arabic, and Aramaic languages, often having very similar meanings, denote the meaning of this verb as “To bless, strengthen, or commend.”  A Hebrew audience would almost certainly been aware of these alternate meanings.
–

–
Gentle Shepherd.
What beautiful pictures all these things are of our Jesus!  He is all about healing, comforting, strengthening.  Weeping may endure for a night, but joy comes in the morning.  He is the Oil of Joy in our trials and tribulations.  By His stripes, we are healed, comforted, strengthened.
–
Brings to mind Isaiah 42:3 which says, “A bruised reed He will not break, and a smoking flax, He will not quench.”  He is not a High Priest that is far removed from us.  He knows what we are going through.  He feels what we feel having been born into the world as human child.  He knows that we are dust and has mercy on us. 😍
–
The lesson of Smyrna to us is that God is not some angry, absentee landlord holding a stick over our heads, waiting to pounce on us at each minor infraction.  NO!  He understands what we face in this life.  He will never leave or forsake us, and be an ever-present help in time of trouble. 💖

One thought on “The Seven Churches Of Revelation Part 2: Smyrna”