Revelation 3:1-6
“ “And to the angel of the church in Sardis write,

‘These things says He who has the seven Spirits of God and the seven stars: “I know your works, that you have a name that you are alive, but you are dead (nekros). 2 Be watchful, and strengthen the things which remain, that are ready to die, for I have not found your works perfect before God. 3 Remember therefore how you have received and heard; hold fast and repent. Therefore if you will not watch, I will come upon you as a thief, and you will not know what hour I will come upon you. 4 You have a few names even in Sardis who have not defiled their garments; and they shall walk with Me in white, for they are worthy. 5 He who overcomes shall be clothed in white garments, and I will not blot out his name from the Book of Life; but I will confess his name before My Father and before His angels.
6 “He who has an ear, let him hear what the Spirit says to the churches.”
– 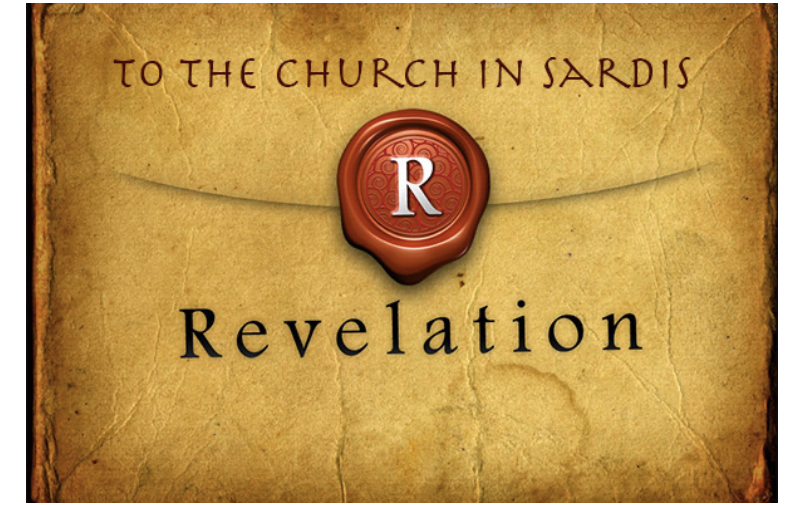 –
Often referred to as “The Dead Church,” Sardis had deviated from its original intent.  It was, however, still viable.  If it wasn’t, Jesus would not even have bothered to speak to this pastor had they been wholly given over to paganism.  What was going on that He called it, “Dead?” 🤔

–
History.
Sardis received the fifth of the seven letters sent to the seven Churches in Revelation.  It Sardis was the capital of the Lydian empire and one of the greatest cities of the ancient world.  Located on the banks of the Pactolus River, it was 60 miles inland from Ephesus and Smyrna and home to the famous 2nd century bishop, “Melito.” 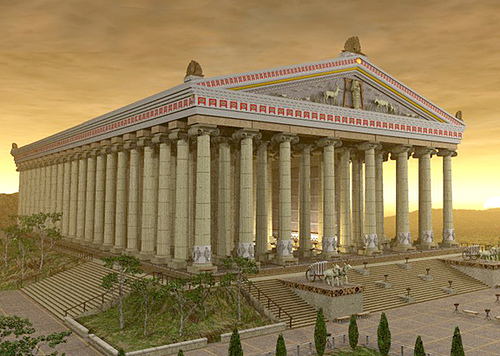 (Temple of Artemis at Sardis.)
–
Artemis, obviously a pagan “deity,” was the main goddess of the city.  The temple dedicated to her in Sardis, pictured above, was one of the seven largest Greek temples, being more than double the size of the Parthenon. 😮  Called, “Artemis,” by the Greeks and known as, “Diana,” to the Romans, she was purported to be the daughter of Zeus, twin of Apollo, and “goddess” of the hunt, the moon, and fertility.
–
Dead (Nekros) Works.
As you can see, there was a lot of pagan worship surrounding the Church in Sardis.  Some of her people, sadly, had strayed from the True God, indulging in dead works as opposed to good works, what Paul talks about in the passages below from the book of Hebrews:
–
Hebrews 5:12-14
“12 For though by this time you ought to be teachers, you need someone to teach you again the first principles of the oracles of God; and you have come to need milk and not solid food.  13 For everyone who partakes only of milk is unskilled in the word of righteousness, for he is a babe. 14 But solid food belongs to those who are of full age, that is,those who by reason of use have their senses exercised to discern both good and evil.”
–
Hebrews 6:1-3
1 Therefore, leaving the discussion of the elementary principles of Christ, let us go on to perfection, not laying again the foundation of repentance from dead works the doctrine of baptisms, of laying on of hands, of resurrection of the dead, and of eternal judgment (nekros) works, and of eternal judgment. 3 And this we will do if God permits.”
–
The word in the opening scripture for “Dead” is the same word as used to refer to dead, as in a corpse, but also “Dead works.”  James also deals with this topic, shedding even more light:
–
James 2:14-17
“14 What does it profit, my brethren, if someone says he has faith but does not have works? Can faith save him? 15 If a brother or sister is naked and destitute of daily food, 16 and one of you says to them, “Depart in peace, be warmed and filled,” but you do not give them the things which are needed for the body, what does it profit? 17 Thus also faith by itself, if it does not have works, is dead (nekros).”
– 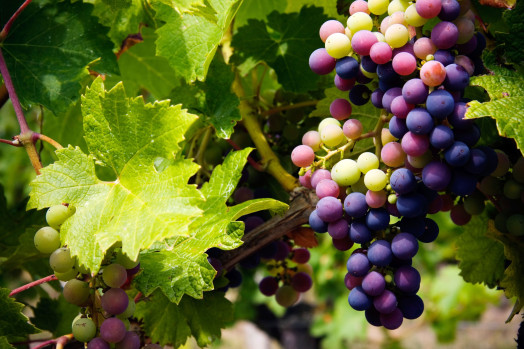 –
Faith And Works.
“Faith Without Works Is Dead.”  Ever heard that before?
–
No doubt most of you have heard a message or two expounded on the topic.  Unfortunately, this passage is often taken out of context to make you believe you need to do good works in order to be pleasing God, to be acceptable to Him, or to prove your love for Him.  The implication is, of course, that the lack of them “proves” that either you don’t love Him enough or, even worse, maybe you’re not even be saved! 😲
–
Now there’s a frightening thought!  Of course just to be sure, you go running up to the front of the Church, fall on your face before God during the inevitable altar call, *and beg to get “Saved,” all over again.😓
–
*Church, this is NOT a scriptural concept.  It’s another in a long line of deceptions from you know who:  The devil. 😡🤮
–
Context Is King.
Since the Bible is its own best commentary, let’s see what it has to say on what really should not be a controversial subject.  In order to properly understand this passage, we’re going to have to look at in in it’s proper context.  As you’ll see, CONTEXT IS KING, because any time you take the TEXT out of it’s CON you are left with a CON.
–
Who Is It Written TO?
First of all, the entire book of James was written TO, and I quote:  “The twelve tribes that are scattered abroad.”  (See ch. 1, vs. 1).  Paul is writing TO THE JEWS OF THE DISPERSION.
–
👇🏻👇🏻👇🏻👇🏻👇🏻
Notice that he is admonishing them 👉🏻not to neglect caring for other believers in need.  THAT is the CONTEXT of his remarks. 👈🏻 It doesn’t have anything whatever to do with your relationship to God.  That is a done deal.
–
Remember Widows And Orphans.
At the end of chapter one, James is reminding these Jews not to forget widows and orphans.  Chapter 2 also encourages these same Jewish believers not to show favoritism to those who are wealthy over those of lesser means, and that they are justified by works NOT before God but before men.
Remember, THEY (the world) will know us by our love.  The entire book of James is teaching about relating to others, not about being acceptable to God.
–
Apparently, the pastor at the Church at Sardis had forgotten that good works do not justify us before God, but show the world the God is love.  They are a witness to the unsaved to draw them to want to know this wonderful Jesus for themselves.  That’s what “They will know us by our love,” means.
–
Forever Secure.
Church, your good works cannot save you.  They have nothing to do with maintaining your salvation.  The lack of them will not cause you to lose your salvation or be left behind in the rapture, as some have more than hinted.  AS IF!
Do not be afraid:  You are forever safe and secure in Jesus!  You can NEVER lose your salvation!  Call it “Eternal Security” or whatever you want.  I put my faith in the FINISHED work of JESUS!
–
False Teaching.
That (false) “teaching” is a cheap scare tactic.  It is an abuse of the privilege of the pulpit.  The person teaching it is using his own self effort to try and manipulate people into living holy lives.  It is a dead work.
(For more on the subject of holiness follow this link:
https://emmausroadministries.wordpress.com/2016/08/13/the-opposite-of-holiness/)
– 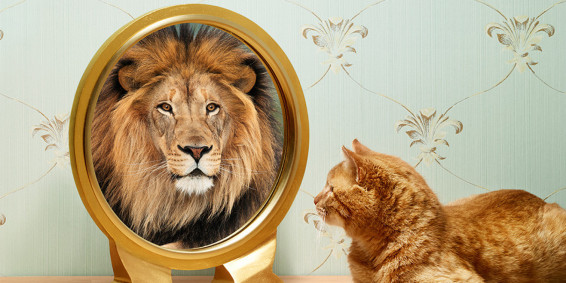 –
Transformed By Beholding.
The one thing that would be most effective in helping people live holy lives seems to be the one thing many don’t seem to want to preach.  And what is that?  Beholding Jesus in His beauty and glory, not our ugliness and gory.
But if you go to church and during the sermon Jesus’ Name is hardly even mentioned, let along His beauty unveiled, how can you be transformed?  The answer is, “YOU CAN’T.”  The Holy Spirit, Who actually does the transforming, has nothing to work with.  Give Him the raw materials He need and your people will be changed effortlessly.
–

–
Repent: Metanoia.
So Jesus wanted this Pastor to “ Remember therefore how you have received and heard; hold fast and repent.’  In other words, “Change his mind” about what he taught his people that our good works are not to make us acceptable to God, but as a witness before the ungodly that there is a God in heaven Who loves them.
–
If there are some who thought they were saved by doing good works, let the truth be told that Jesus is THE Way, THE Truth, and THE Live.  No one becomes acceptable to the Father without being cleansed by the precious blood of Jesus.
–
“He who overcomes (has been cleansed by the blood) shall be clothed in white garments, and I will not blot out his name from the Book of Life; but I will confess his name before My Father and before His angels.
6 “He who has an ear, let him hear what the Spirit says to the churches.”
–
Please follow the link below to part 6:
https://emmausroadministries.international/2019/01/17/the-seven-churches-of-revelation-philadelphia/

One thought on “The Seven Churches Of Revelation Part 5: Sardis”