Skip to content
1  Samuel 17:12-13, 15-18
“Now David was the son of that Ephrathite of Bethlehem Judah, whose name was Jesse, and who had eight sons. And the man was old, advanced in years, in the days of Saul. The three oldest sons of Jesse had gone to follow Saul to the battle. The names of his three sons who went to the battle were Eliab the firstborn, next to him Abinadab, and the third Shammah.
“But David occasionally went and returned from Saul to feed his father’s sheep at Bethlehem. And the Philistine drew near and presented himself forty days, morning and evening. Then Jesse said to his son David, “Take now for your brothers an ephah of this dried grain and these ten loaves, and run to your brothers at the camp. And carry these ten cheeses to the captain of their thousand, and see how your brothers fare, and bring back news of them.”

–
David was just 17 years old in this passage when he was sent to bring food and supplies to his brothers, who were fighting with the armies of Israel. They had been on the front lines with King Saul against the Philistines…..again.  Those troublesome people were a constant thorn in their sides!
–
The 40th Day.
David was sent to bring food to his brothers and to bring back news to their father about how they were doing. He just “Happened” to arrive on the 40th day just in time to be an ear witness to what the old giant, Goliath, had been saying to the armies of Israel for the last 39 days.
–
He could see that they were all terrified. But today, the 40th day, that was about to change…..in a VERY dramatic way.  Let’s continue the story.
–
1 Samuel 17:22-26
“And David left his supplies in the hand of the supply keeper, ran to the army, and came and greeted his brothers. Then as he talked with them, there was the champion, the Philistine of Gath, Goliath by name, coming up from the armies of the Philistines; and he spoke according to the same words.
“So David heard them. And all the men of Israel, when they saw the man, fled from him and were dreadfully afraid.
So the men of Israel said, “Have you seen this man who has come up? Surely he has come up to defy Israel; and it shall be that the man who kills him the king will enrich with great riches, will give him his daughter, and give his father’s house exemption from taxes in Israel.”
“Then David spoke to the men who stood by him, saying, “What shall be done for the man who kills this Philistine and takes away the reproach from Israel?  For who is this uncircumcised Philistine, that he should defy the armies of the living God?”
– 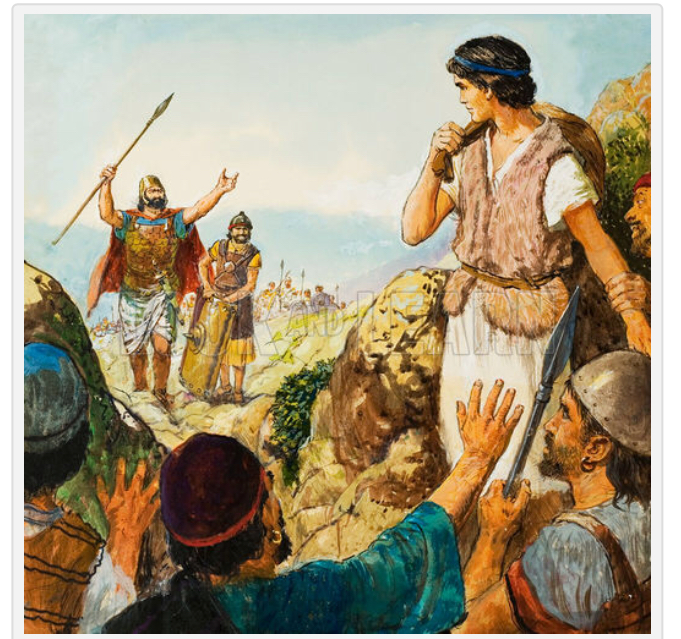 –
Strange Battle Strategy.
The two opposing armies of Israel and Philistia were camped there opposite each other on either side of the Valley of Elah. Elah In Hebrew means, “Fear.” It doesn’t say at this time that they were fighting each other.  It simply says that the giant, Goliath, came out every morning and evening to mock the armies of Israel, heaping crippling condemnation, “Kherpah” in Hebrew,  on them.
–
That’s it. He came out, stood before the Israelite army, and hurled insults at them and at their God for 40 days.  The Israelites would then flee from him in abject terror. What kind of battle strategy is that? 😳🤦🏼‍♀️
–
Young David arrived on the scene the 40th day of all this nonsense was going on, but get this:  He heard the exact same thing that the armies of Israel had been hearing, yet his response was completely different.  Why?  He knew he had a covenant with the Living God, that’s why.
–
The Real Enemy.
Think about it: Everyone else in Israel knew the True God.  Everyone was under the same covenant as David.  Yet, obviously, they didn’t share the same confidence in God he had.  Notice what his major concern was?  Not their battle “Strategy,” if you can call running away a plan. He wanted to TAKE AWAY THE REPROACH FROM ISRAEL.
–
“Reproach,” is an old fashioned word for “shame.”  In Hebrew, it is the word, “Kherpah.”  Whenever someone is “Standing in judgment” over you, they make you feel “Reproached.”  It could be your family, your “Friend,” if you can call them that, your pastor, Bible teacher, or whoever.
–
Bible Numbers.
Notice that this was the fortieth day that this verbal abuse had been going on. This was very concerning to David.  Why?  Because numbers in the Bible have meaning. The Holy Spirit doesn’t put them there on a whim. It is very significant.
–
40 is the number of “Probation or transition.“  The whole situation was fast becoming critical. If allowed to continue, it would become ingrained so deeply, it would be almost impossible to overcome.  But fear not! Young David arrived on the scene when he was 17 years old, and 17 is the number of VICTORY!
–
{If you’d like to learn more about the meaning of numbers in the Bible, you may follow the links below:
https://emmausroadministries.international/2020/07/02/numbers-have-meaning/
AND
https://emmausroadministries.international/2020/07/03/bible-numerics/)
–
Also hidden in this story are pictures of Jesus and what He did to redeem all of us. As you saw, some things are hidden in the meanings of numbers. But there are others layers of meaning. Some are in hidden in types and shadows, while others are in the Hebrew Language itself.
–

–
Typologies.
This terrifying giant of a man was clad in bronze from head to toe:  Bronze helmet, breastplate, shield and foot gear.
Bronze in the Bible depicts “judgment.”  Bronze helmet = judgmental thinking.  Bronze breastplate = a heart that has no love for people.  Bronze footwear = standing in judgment.  Bronze shield = resists grace, i.e. The real gospel.
–
The word, “Philistine,” itself means “To wallow in the dust.”  Can’t feel much lower than that.  Sounds like the devil, doesn’t it?
–

–
Secrets In The Hebrew Language.
Now let’s look at the Hebrew language itself.
Hebrew reads from right to left and is a form of picture writing, like Chinese.  The word pictures give us a window on God’s perspective.  We can see what reproach means to Him, something you’d never read in any definition.
–
The Hebrew spelling of the word, “Kherpah,” is very revealing.  It looks like this:  [חרפה]
Each letter means:
[ח] = het/chet–“fence”
[ר} = resh–“head, think, meditate
[פ] = pei–“mouth, confess”
[ה} = hei–“grace.”
–
The root word of “Kherpah,” is the word “Relax-raphah” [רפה] but the letter “het [ח] is missing.  In other words, the “Fence” is gone.  If the “Fence” is gone, you are unprotected.
You can only relax when you are not “Fenced off” from God by CONDEMNATION.
–
The message is clear:
“When you are fenced off, or prevented, from relaxing (feeling condemned causes unrest) you feel “Kherpah-reproach.”
–
The Devil‘s Tactics.
Reproach, shame, and condemnation are tools the devil uses to try and get to us.  He’s really good at using half-truths; ok let’s face it, even the whole truth, to make us feel shame, disgrace and think that God is angry at us.
You see, he hates God and, therefore man, because we are made in His image.  But since he cannot strike at God directly, he does the next best thing: He strikes at US.  We are the ones God SO LOVED that He gave up the life of His beloved Son to save.
–
What the devil does is come to you whispering condemning thoughts. But he doesn’t say,”You’re no good or you’re a bad person.’ No. He substitutes the personal pronoun, “I” for “You,” then he knocks you on the head for thinking the thought he put there in the first place!
–
Below are some of the things he whispers:
“I don’t spend enough time with my kids.”
“How can I call myself a Christian after that display?”
“I only prayed fifteen minutes while (whoever) prays for two hours….EVERY DAY!”
“I really wish I could faithfully read my Bible EVERY day, like so and so does.”
…….and his favorite:
–
“I just can’t do anything right. I’m worthless!”
– 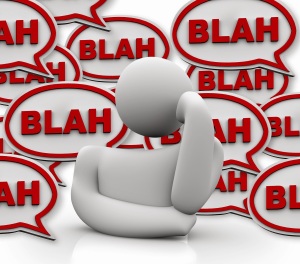 Not A Mind Reader.

Blah, blah, blah…on and on he drones, telling lies, lies, and more lies substituting the personal pronoun, “I,” instead of “you,” as I said.  As soon as you think you thought of it, you own it.

News Flash:  He cannot read your mind.  He only knows he’s got you by what comes out of your mouth.  Don’t own the thought by giving voice to it.  Speak what God’s word says about your situation.  ANY THOUGHT THAT CONDEMNS YOU IS NOT FROM GOD.
–

Feeling condemnation effectively keeps you from receiving anything–and I do mean ANYTHING–at all from God.

No Condemnation.
Church, the Holy Spirit doesn’t work by condemning us.  His job is to remind us that we are the righteousness of God in Christ. He knows better than anyone that “THE STRENGTH OF SIN IS THE LAW, meaning condemnation.  Sin loses it’s power over us when we realize that “There is therefore now now condemnation……” no Kherpah.  Jesus bore ALL our shame!
– 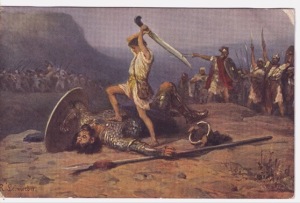 –
The Faith Of One.
David knew that if the Israelites bought into this “Kherpah” Goliath was spewing out, God would not be able to deliver them.  Condemnation, i.e. THE LAW, stifles faith.  They are mutually exclusive. Since everything we receive from God is based on grace through faith, not by the law, which condemns, they were unable to believe God for victory.
–
But look what happened as a result of one seventeen-year-old shepherd boy….ONE BOY….KNOWING and being CONFIDENT in his covenant with God and putting his faith in Him alone:  The giant, Goliath, was killed AND beheaded!  And the result?  Israel vanquished the Philistines in a great victory!  They routed the whole army!
–
This depicts what Jesus did to redeem all of us. He cut off the head of the devil in His death on the cross and won for us the greatest victory of all time!
–

Church, you and I have the same covenant with this wonderful God that Israel had. Because of it, we now get to call God, “Father.” If David achieved such results being under the Old Covenant, how much more we who are under the New?

Feelings of shame, condemnation, and reproach are still the greatest obstacles to our receiving from God.  WHEN WE REPROACH OURSELVES FOR OUR FAILURES, WE DISHONOR THE WORK JESUS DID AT THE CROSS. It’s tantamount to us trying to pay for our own sins!  That cannot be. 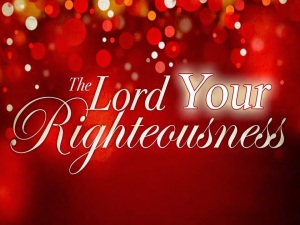 –
So come on all you Davids out there! Stand up!  Take courage.  Believe in your Covenant!  Don’t be afraid to stand before your Goliath and declare victory over your situation. You can take back everything of which you have been robbed, both individually and as a nation. It doesn’t matter how big Goliath is: OUR GOD IS BIGGER!!!
–
Jesus died to deliver us from shame, condemnation, and reproach: ALL OF IT.  God wants us to relax, rest in Him, and not feel any shame or condemnation:  No more Kerpah, because Jesus took away ALL our reproach!
–
EPILOGUE.
You might be interested in what David did with the severed head of Goliath. It tells an incredible story all its own which you may read by following the link below: https://emmausroadministries.international/2016/02/28/the-place-of-the-skull/