“Now early in the morning He (Jesus) came again into the temple, and all the people came to Him; and He sat down and taught them. Then the scribes and Pharisees brought to Him a woman caught in adultery. And when they had set her in the midst, they said to Him, “Teacher, this woman was caught in adultery, in the very act. Now Moses, in the law, commanded us that such should be stoned. But what do You say? ” This they said, testing Him, that they might have something of which to accuse Him.  But Jesus stooped down and wrote on the ground with His finger, as though He did not hear.”

While He was here on earth, Jesus went about doing good everywhere He went.  All who were sick or oppressed of the devil that came to Him were healed and delivered.  He opened the eyes of the blind, fed thousands of people, and preached the Gospel.

You’d think everyone would be overjoyed, want Him stay forever, and make everything right, huh?  Sadly, the religious set of the day tried everything they could think of to get rid of Him. 😮 Why?  Let’s find out!

Those legalistic bunch of hypocrites, i.e. the Pharisees, were so angry and jealous of Jesus.  Betcha if He preached the same kind of thing they did—law mixed with (very) little grace—they would not have endlessly tried to trap and discredit Him.  Well, not on that account anyway.

Why were they so focused on trying to trap Him?  Because they were blinded by hatred and jealousy.  You see, before Jesus arrived, they were the ones who were the center of attention.  Everyone came to them for help and advice.  They were the most important people in society, almost revered.

But not now.  No.  Now the people flocked to Jesus instead.  They were so blinded by hate that they couldn’t see past the end of their turned-up noses to see that The Son of the Living God STANDING RIGHT THERE IN FRONT OF THEM.

“Caught” In The Act?

How “upstanding and noble” of them to bring this sinner woman to Jesus.  You don’t really think they had a question about what should be done with her, do you?  Nope; they didn’t.  It was just another in a long line of wicked, nauseating, infuriating attempts to try and trick or trap Him in a lie or some inconsistency.  They plotted and plotted for anything they could do to discredit and destroy Him. 😠

Kinda sounds like his henchmen today, doing the same thing to godly men and women.  But what can I say?  The devil isn’t exactly very original or creative.  His followers are still following the same tired, old, very predictable script.

Now, the account says she was “Caught” in the act of adultery.  I say “Caught,” in quotation marks because you notice they didn’t bring the man with her.  Last time I looked, adultery takes two. 🤨  They didn’t bring him along because it was probably one of them:  One of the Pharisees, I mean.  (Just my opinion 🧐).  It’s very likely that she was unclothed.  The whole sordid scene was probably a big fat messy set up.

So, they “dutifully” brought her to Jesus and said, (no doubt in haughty, self-righteous tones), “Now Moses, in the law, commanded us that such should be stoned. But what do You say?” This they said, testing Him, that they might have something of which to accuse Him.”

Jesus, however, cool as can be, was completely non-plussed.  He never even responded to them.  Instead He stooped down and began writing on the ground with His finger.

Those hard-nosed, self-absorbed hypocrites thought to themselves, “Aha! We have Him cornered, now.”  They reasoned that if Jesus just forgave her and let her go, they could say, “See? He has transgressed the law of Moses!” But if He said, “Stone her,” they’d cry, “Oh look, He preaches grace but where’s the grace now?” thereby discrediting His ministry.

But Jesus wasn’t fooled by their ruse. He knew the hardness of their hearts.  Let’s continue the story in verse 7:

“7 So when they continued asking Him, He raised Himself up and said to them, “He who is without sin among you, let him throw a stone at her first.” 8 And again He stooped down and wrote on the ground.  9 Then those who heard it, being convicted by their conscience, went out one by one, beginning with the oldest even to the last. And Jesus was left alone, and the woman standing in the midst.”

Jesus again didn’t answer them as if He hadn’t heard a thing they said.  He simply stooped down again and wrote with His finger on the ground a second time. 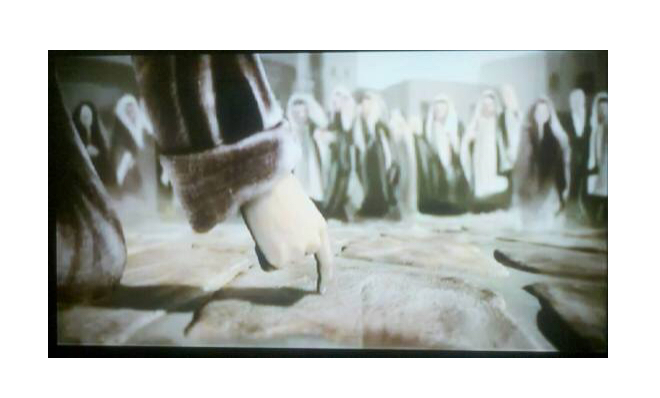 What Did Jesus Write On The Ground?

What do you think Jesus wrote on the ground that evoked such a dramatic response from this heretofore self-assured, self-righteous crowd?  You’ve probably heard, as I have, lots of ideas and speculation.

I always assumed He wrote in dirt on the ground.  However, due to recent archaeological discoveries, they have unearthed the actual temple courtyard where Jesus would have written with His finger.  Guess what, Church:  He didn’t write in dirt; HE WROTE ON THE TEMPLE STONES……TWICE, in fact! 😮

Hmmm…..let me think now.  Writing……on stones…..with His finger.  Where have we heard that before?  Sound familiar?  It should!  God wrote the Big Ten up on Mt. Sinai on tablets of stone back then not once, but twice, just like in this story.  I’m sure you noticed it says that Jesus stooped down TWO TIMES and wrote on the ground.

Remember back in Moses’ day?  God had to write a second set of tablets because Moses broke the first ones.  Jesus stooping down twice was a reference back to those occurrences.

It may interest you to know that those tablets were not written on just any old stone.  They were made of sapphire, according to Rabbinical tradition.  Yes, you read that right:  SAPPHIRE.

Believe it or not, there is actual scriptural preceding for this conjecture, if you don’t believe the rabbis.   If you would like to read more about that, you may follow the link below:

The text doesn’t specifically say what Jesus wrote but it gives us a REALLY BIG CLUE!   As He was writing, one by one the accusers of the woman (depicting our accuser, the devil) each dropped the “STONES” they were carrying and went away.

In Biblical typology, stones are a depiction of the law.

Now, there’s nothing wrong with the Law.  It is holy, just, and good but completely inflexible.  It demands ABSOLUTE COMPLIANCE…….OR ELSE!  Every single one of them knew very, VERY WELL that, if you are guilty of one, you’re GUILTY OF ALL.  NO MARGIN FOR ERROR.  When it comes to the Law, God doesn’t grade on the curve.

What Jesus did by writing on those stones was reminding them of what was written on stones: THE TEN COMMANDMENTS.  His actions said to them “You presume to tell me the law?  I’m the One Who gave it.”

He didn’t yell; He did chide.  He simply, quietly, graciously, perhaps even gently, with a great deal of sadness at the hardness of their hearts, was reminding the angry crowd that EVERY SINGLE ONE OF THEM WAS GUILTY OF BREAKING THE WHOLE LAW.”   No wonder they all dropped  their stones!  They knew they were just as great a sinner as this woman they entrapped. 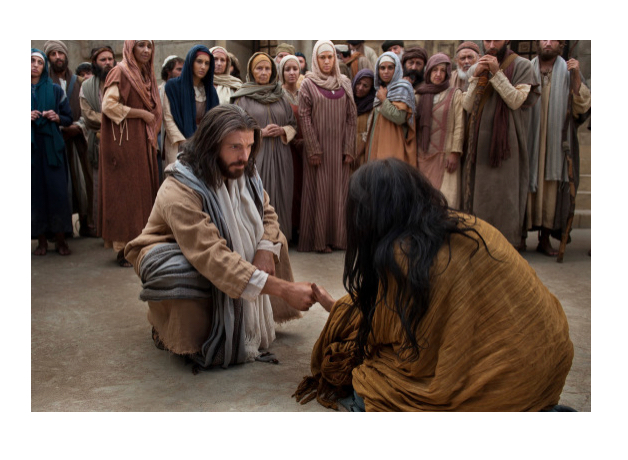 Neither Do I Condemn You.

They had come to Jesus brandishing law.  Whenever anyone did that, He gave it right back to them…..except He restored it to it’s pristine standard.  You see, legalistic people don’t really have the proper respect for the law they think they do.  They water it down just enough for them to be able “obey” it.  To this woman, however, who offered no defense or excuses for her sin He showed great Grace.  He didn’t accuse her nor did He excuse her sin.

The passage goes on like this:  “10 When Jesus had raised Himself up and saw no one but the woman, He said to her, “Woman, where are those accusers of yours? Has no one condemned you?” She said, “No one, Lord.” And Jesus said to her, “Neither do I condemn you; go and sin no more.’”

FIRST, Jesus let her know with love for her in His eyes that He did not condemn her.  THEN He said “Go and sin no more.”  He gave her the gift of “no condemnation” SO THAT that she could walk uprightly.

Just like her, you and I don’t have the grace we need to “go and sin no more,” because the strength of sin is the law.  But THE ANTIDOTE TO SIN IS GRACE.  You cannot out-sin God;s Grace.  It is greater than all our sin!

Sadly, the Church has it backwards. What you often hear is the exact opposite:  “Go and sin no more, THEN you are not condemned.”  But only when we know we are NOT condemned are we empowered to live holy lives, almost by accident; effortlessly, as it were.  That’s what Jesus meant when He said, “He who is forgiven much, LOVES MUCH.”

(For more on that topic, you may follow the link below:

The Gift Of No Condemnation.

He does that for us today:  Gives to us that same grace, that same gift of “No condemnation.”  Contrary to popular opinion, grace does NOT give people a “license to sin.”  Who needs to be governed by the Ten Commandments when we are lead from within by the Law Giver HIMSELF: JESUS!

(For more on that topic, follow the link below:

No One Is Forgiven Little.

The legalistic, self-righteous pharisees among us are always saying that “Grace gives people a license to sin.”  Jesus says OTHERWISE.  Since when do people need a license to sin?  They seem do so perfectly well without one.  It is LAW, in truth, that produces licensciousness.  It is a lack of knowing how forgiven they are that causes people to sin and remain in bondage to debilitating habits.  Remember, “The strength of sin is the law, but “Grace and truth came by Jesus Christ.”

That truth sets us free! 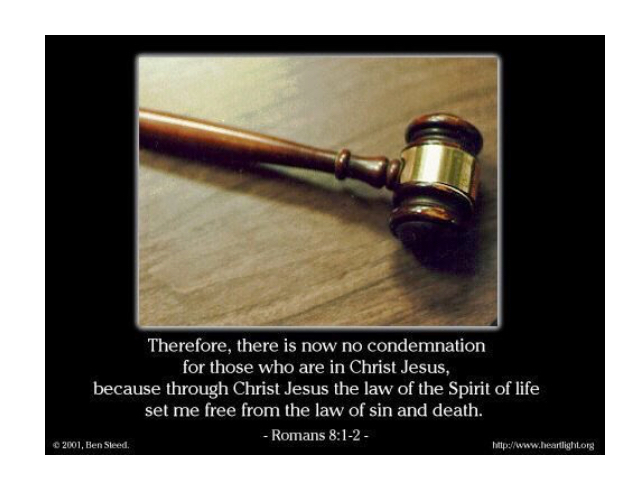 Church, you are forever righteous in Christ.  Your entire life, including your future sins, are completely cleansed.  You, too, have the power to “Go and sin no more” because Jesus says to you, “Neither do I condemn you.”

4 thoughts on “Neither Do I Condemn You.”