Numbers 21:4-10
4 They (the Israelites) traveled from Mount Hor along the route to the Red Sea, to go around Edom. But the people grew impatient on the way; 5 they spoke against God and against Moses, and said, “Why have you brought us up out of Egypt to die in the wilderness? There is no bread! There is no water! And we detest this miserable food!” (manna) 😬
6 Then the Lord sent venomous snakes among them; they bit the people and many Israelites died. 7 😕 The people came to Moses and said, “We sinned when we spoke against the Lord and against you. Pray that the Lord will take the snakes away from us.” So Moses prayed for the people.
8 The Lord said to Moses, “Make a snake and put it up on a pole; anyone who is bitten can look at it and live.” 9 So Moses made a bronze snake and put it up on a pole. Then when anyone was bitten by a snake and looked at the bronze snake, they lived.” 🙌🏻

The First Of Many Evil Days.

Why do I say, “38?”  Because it was 38 years from the time they were turned back from the Promised Land at Kadesh Barnea.  From that point on, their wandering was a judgment on them.  It was the 9th of the month of Av. (More on this later.)

Ask any of your Jewish friends about it and they will tell you some hair-raising tales. So many evil things that have happened to the Jewish people on this exact date, it cannot be mere coincidence.

It was on this, the first of many evil days, that the spies returned from gathering intel on the land of Canaan.  10 of the 12 brought back an evil report to Moses; all except Joshua and Caleb.  Sadly, all the people believed the bad report and nearly took up stones to kill Joshua and Caleb.

This really angered God and He wanted to destroy them all.  But Moses interceded on their behalf and God relented. 😮 However…..NONE of that faithless and rebellious generation were allowed to enter the Promised land.  They died in the wilderness over the course of the next 38 years.

As I said above, the date was the 9th of Av, or Tish B’Av. 😭  since there’s so much more to this sad story, plus a really cool picture of an event from the life of Jesus on this earth, you may read all about the whole thing by following the link below:

The opening passage records the 10th time in their wandering that the Children of Israel tested the LORD since that fateful day.  They even went so far as to say they HATED the Manna He sent; called it “Miserable food!”

–
The Bronze Serpent.
God sent venomous snakes among the people and many died.  Well, He didn’t actually “Send” the snakes; they were there all along.  All He did was lift off His hand of protection and allow the serpents to come in and bite them.
–
But Moses prayed to the LORD for the people.  According to God’s command, he placed a bronze serpent on a pole in the midst of the camp.  When anyone looked intently with expectation at it, they were healed.  It was a picture of Jesus, our Healer!
– 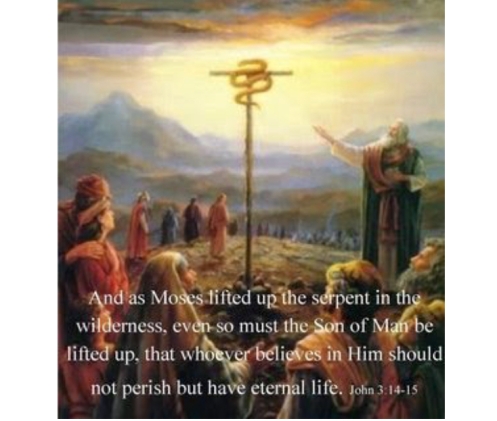 Why A Serpent, Not A Lamb?

As the perfect, sinless, Lamb of God, Jesus came down from heaven to became the final sacrifice for sins.  No more bulls and goats, HALLELUJAH!  So, why did God have Moses make a bronze SERPENT and not a bronze LAMB and put it on a pole?  Because it would to be THE LAMB that would take away our sins: What we DO.  But on the cross, Jesus became what we ARE: Snakes.

Yep, that’s right, folks.  Without Christ, we’re all just a bunch of snakes.  That actually explains quite a bit when you see what is going on in the world today.

Anyway, God cannot forgive the flesh.  Romans 8:4 says that God “CONDEMNED SIN IN THE FLESH.”  That is why Jesus “BECAME” sin at the cross.  He became what we are: A sin factory, basically.  Though God could not forgive the flesh, He CONDEMNED it in the body of His Beloved Son on the cross.  Now, as we walk through life, we are under His covering, like a waterfall, so that when we occasionally sin, it is cleansed instantly.

(In case you don’t believe me, The Holy Spirit draws a beautiful picture of this truth in the story below about the Burnt Offering:

There’s something in our flesh that can just turn around and bite you, isn’t there?…..like a snake.  Our troubles aren’t always the devil attacking us or him whispering lies, though he does do those things.  Sometimes he gives you thoughts of suicide, anxiety, fear, depression.  Or maybe, you are suddenly overwhelmed with impure thoughts, that kind of thing.  But those thoughts can also be our fleshly tendency to do wrong.
–
Please, Church; do yourself a favor.  Don’t look at your flesh–at yourself–when you fail.  LOOK TO JESUS!  He is your your true Identity.  He became what you are so that you can become what He is!  HALLELUJAH!!!
–
After all, we are transformed by beholding His GLORY…..NOT OUR GORY! 🙌🏻

Now let’s discover at what God has hidden in the text itself.  You know how He loves to hide wisdom in plain sight. 😉

Hebrew reads from right to left and is a form of picture writing, like Chinese. The word “pictures” of each letter tell us a story and show things you’d never find in any definition.  What’s really cool is that they give us a window on God’s perspective.

This is the Hebrew spelling of the word, “Serpent:  Nachash  [נחש]  The Hebrew letters, from right to left, are “nun-chet-shin.”
–
[נ]  Nun is a picture of a “fish.”  The fish is symbolic of believers and of the Church. That is why it was used as the symbol for “Christian” in the early Church.
[ח]  Het or chet; the “ch” is pronounced like a guttural “k.” It is a picture of a “fence.” Something can either be fenced in or fenced out.
[ש]  Shin.  This letter by itself means “Shaddai” as in “El Shaddai – Almighty God.”  It is the letter you see on the mezuzah secured to the doorpost of most Jewish households.

Put the meanings of all the pictures together and they tell a story.  Church: What is it that the devil wants to do most of all?  He wants to KEEP BELIEVERS FENCED OFF FROM ALMIGHTY GOD!  That is God’s perspective or definition of a serpent.

But believers are not the only ones referred to as, “FISH.” Jesus told his fisherman/disciples that He would make their “Fishers of men.”  People in general are “Fish.”

The “Fish” that are still outside of Christ are particularly susceptible and at risk.  Think about it 🤔 :

How can multitudes of people all think and believe wrongly?  They are first led away by their own lusts and enticed by things that look pleasurable and harmless when, in fact, they are dangerous and, ultimately, deadly.  Not versed in the Bible so that they have no objective standard, and having unregenerate minds, they cannot think straight nor discern what is true and right.  Down the rosy path to destruction they go until they are so hopelessly entangled, they are almost beyond hope.

Because they have believed and been told that “God is the source of all their problems, they run to everyone and everything else BUT God, Who just happens to be the ONLY One Who can help. They have, effectively been “Fenced off from God,” by the greatest serpent of them all: satan.

The word for “bite” in Hebrew is “nashak.”  Below is its Hebrew spelling:

This word is used when the fiery serpents “Bit” the Israelites in the desert.  It’s also the same word used to refer to the “Charging of interest” by lenders: Fiery little bites of poison.  Pretty graphic picture if you ask me!

The letters, “Nun and Shin” you’ve already met.  The final letter is the form of “Kaf [ך]” found at the end of a sentence as opposed to elsewhere in a word.  Whenever a word ends in “Kaf,” [ך] it is either something that belongs to you or that happens to you.  This letter looks like it has its back turned away from God [ש]

The word pictures tell us, “When you (the believer) [נ]ignore or turn your back [ך] on Almighty God’s [ש] instructions (that’s what Torah means) you can get “Bit – Nashak [נשך].” 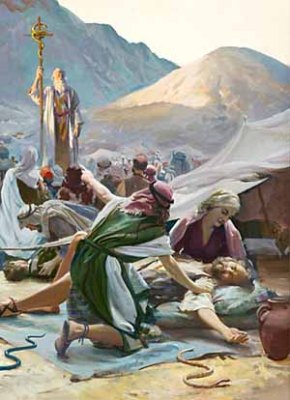 Your “fiery serpent” may be your debt, your depression, your disease, or some other seemingly insurmountable problem.  How do you deal with your problems?  How did God answer the people’s prayers to take the serpents away?  Did He take them away?  No.  He had Moses make a “Fiery bronze serpent” and put it on a pole.

This is the Hebrew word for bronze, “Nachoshet,” and its Hebrew spelling:

The first three letters we’ve already discussed.  The one on the far left, however, you have not met yet.  It is the letter, “[ת] Tav,” which is literally a picture of the “Cross.”  ✝️
–
Bronze, wherever it is mentioned scripture, is a typology of “Judgment.”   You can easily see the word, “Serpent,” comprises the first three letters.  The message in the word “bronze” in Hebrew definitively demonstrates:  “The serpent is judged at the cross!” 🙌🏻
–
..…hence, the bronze serpent on the pole, not a bronze Lamb!  HALLELUJAH!
–

Today, because our precious Jesus selflessly sacrificed Himself for us on the cross, you and I can look expectantly for healing and every provision to His finished work because the Lamb of God has replaced the bronze serpent.

As if all that weren’t cool enough, look at the word for Eagle and its Hebrew spelling:

Once again, the first two letters you already know.  The letter on the far left of this word is, “Resh-[ר].  It means, “Leader or head.”  “Rosh Hashanah,” for instance, means, “head of the year.”

–
This is what it means to God to be an eagle:  “When you accept the Lord as your leader or your head, you become an EAGLE!”

–
Reminds me of Isaiah 40:31 that says, “They that wait upon the LORD shall renew their strength.  They shall mount up with wings like eagles.”
–

Why are we suddenly talking about Eagles?  Remember what it says in Psalm 91?   We will tread upon the lion and the cobra; the young lion and the serpent WE SHALL TRAMPLE UNDERFOOT!

(For more on Psalm 91, you may follow the link below:
https://emmausroadministries.international/2022/01/02/protected-against-attacks-of-the-enemy-psalm-91-series-part-6/)
–
That’s why, when we wait upon The Lord, God says we are like EAGLES and can trample on snakes.
…..And now you know why it was not a bronze lamb on a pole, but a Bronze Serpent.