Matthew 1:1
“The book of the genealogy of Jesus Christ, the Son of David, the Son of Abraham.”

In Part 1 we discussed where to find the key to each Gospel as well as every book of the Bible. In part 2, we covered why we have four Gospels in the first place.

Now we are going to explore this perplexing question: There are only two Gospels that contain Jesus’ genealogy: Matthew and Luke.  Why are there two and not four?  Let’s dig in!

Matthew begins by saying that Jesus is “The Son of David, the son of Abraham.” Why is David’s name mentioned before Abraham’s when he lived long before him?  Because this is the Gospel of the King.

The Holy Spirit had Matthew document Jesus’ lineage this way to demonstrate that He is a direct descendant of King David and rightful heir to his throne.  He has a bonafide Royal pedigree. In fact, He has a double claim!

As we learned in part 2, Jesus is called, “King of the Jews” most often in Matthew’s Gospel, which is represented by the picture of the Lion. Abraham’s name is mentioned after David’s because it was to him that God promised the land.  You see, when Jesus returns to rule the world one day very soon, He will not only reign as King over the whole earth, He will rule from His own land, Israel.  As a direct descendant of both, He has a rightful claim to the land and the throne.
–

Four Women.
There are many men mentioned in Matthew’s account but four women are also listed. Now obviously, every man listed had a mother, so why are only four listed?

Curiously, every one of these ladies had, shall we say, a “Checkered past,” with the exception of Ruth. She just happened to come from the wrong nation. What does that mean? As usual, The Holy Spirit is painting beautiful pictures of Jesus!

–
The first woman mentioned is Tamar. She did something really bad, pretending to be a prostitute in order to trick her father-in-law, Judah, into having sex with her! 😮  As a result of their union, she gave birth to twin boys:  Perez and Zera.  Perez is in the lineage of our Lord Jesus.

–
The second woman listed is Rahab, the prostitute who lived on the wall of Jericho. She is the one who sheltered and helped the two Hebrew spies when they came to town before it was overthrown.  Her son was “Boaz,” was the hero of the story of the third woman listed in Jesus’ genealogy.

The third woman mentioned is Ruth, the only woman who did not have a questionable moral character. Quite the opposite in fact. Her only “fault” is that she was from the country of Moab, a nation which, at that time, was cursed by God.

Why were they cursed? Because one of their kings, Balaak, hired the wizard, Balaam, to curse the Israelites as they were traveling from Egypt to the Promised land.  She married Boaz, Rahab’s son, became part of Jesus’ lineage and was the great grandmother of King David.

(Below is a link you may follow the link to an 11 part study series about her:

Bathsheba, the fourth woman mentioned, was the widow of Uriah, the Hittite.  She and King David committed adultery after which he conspired, unbeknownst to her, to have her husband killed. Bathsheba became pregnant by King David, though the child from their union died. However, later on the richest and most famous King of all time was born to them: Solomon! He is in Jesus’ lineage. Amazing!

–
Typologies.
Why did Matthew not list any of the other illustrious women, like, “Sarah or Rebecca.”  I mean, this a genealogical record, right?  Every one of those men had a wife. Can’t have children without a female involved, right?  So, why were these four in particular singled out?  Because their stories tell the incomparable story of salvation…..and they are Gentiles!
–

Tamar, though her life was a mess, did the wrong thing for the right reason.  Despite her faults, she was , “CHOSEN” to be in the lineage of Jesus.

Rahav, the prostitute who lived on the wall of Jericho, was the lady who hid the two Hebrew spies. She and her whole household were spared when the walls fell.  How did the LORD indicate which house was hers?  He arranged for her to hang a RED CORD out of her window on the wall. The scarlet cord is a picture the blood of Jesus.  You see, sometime during the last 40 years, she had heard about the God of Israel and become a believer.  She is a typology of “SALVATION.”

Ruth is the only woman in the entire Bible that the Lord calls, “Virtuous.” But there was one little detail which disqualified her from entering into the congregation of Israel: She was from Moab, a nation cursed by God for the reason stated above. (See Deuteronomy 23:3)

–
She married one of the sons of a Jewess named, “Naomi,” who died in the land of Moab. She moved back to Israel with her mother-in-law. They were not only poor, but had no man to earn a living to support them. She just “happened” to be gleaning in the field of a very wealthy relative of her dead husband:  Boaz, who fell madly in love with her and ultimately married her.  As his wife, she was now owner of the whole field.

You and I, like Ruth, are joint-heirs with Christ!  Boaz, a type of Christ, in becoming her “Goel: Kinsman Redeemer,” gave her access to the congregation of Israel (the family of God) by Grace. She is a typology of “REDEMPTION.”

Last of all is Bathsheba, who is not mentioned by name.  Amazingly, even though she and King David committed adultery and he had her husband killed, she ended up sitting on the throne of Israel alongside David, her husband.  She is a typology of the ROYAL KING/PRIESTHOOD of the Church.
–
She is a picture of you and I, seated on the right hand of the Father, right next to Jesus. We are king/priests just like Him.  He calls us “ROYALTY.”  Jesus CHOSE you and I, He SAVED us by His blood, He REDEEMED us and has seated us next to Him.  We are ENTHRONED with Him and seated in heavenly places next to Him!

The message is clear that, no matter how messed up your life is, Jesus loves you and wants to redeem your life from destruction.  These four women demonstrate to us that Jesus is not only King of Kings but the King of grace, and that He always meant to offer salvation to the Gentiles as well as the Jews. 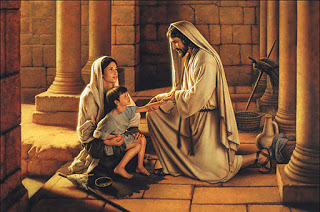 The Gospel Of Mark.
Mark’s Gospel does not contain a genealogy. As you saw in part 2, this gospel is all about Jesus as the suffering Servant.  There is no lineage recorded because one does not inquire about the pedigree of a servant. They simply go about, doing their master’s bidding.
–
Mark shows that Jesus divested Himself of His Divinity, humbled Himself, and was born into this world as a tiny, helpless human baby. He went about doing good, healing all that were sick or oppressed of the devil. He was all about doing His Father’s will until every last jot and tittle of the law was fulfilled and He finished the work!

Luke is the only Bible “secretary” who was a non-Jew.  He was also a doctor. In fact, he was known as “The beloved physician.” Isn’t it just like our wise Father to choose a doctor to write about His Son as a human? Who better to talk about “Man” than someone who is intimately acquainted with the physiology of man?
–
This gospel was written to show that Jesus was 100% man, not just someone who took on human form, like invasion of the body snatchers.  He was born of a Virgin as a tiny, helpless, human baby, and cared for by a very young girl.  (Mary was probably not much older than about 14).  No women are mentioned here because the emphasis, again, is on Jesus as Man. He is both God and Man:  100%.

He had to become human so that He could qualify to be our Goel, or Kinsman Redeemer.  You see, by law, since it was a man (Adam) who broke God’s law and forfeited our inheritance, it must be another Man, Jesus:  The 2nd Adam, to buy it back.
He perfectly obeyed all of God’s laws, fulfilled them AS us, died on the cross AS us, was buried AS us, and raised to life again AS all of us!

When you accepted Jesus as your Savior, what Jesus did was credited TO you. It is AS IF you obeyed all the Law, died, were buried, and raised to life.

This is so beautifully portrayed in the story of Ruth and Boaz which you may read all about by following the link above in the section on the four women.

The Child Grew Up.
Luke’s gospel also demonstrates that, as a man, Jesus grew up. From a tiny baby, to the child in the Temple, to the full-grown man, He grew in grace and favor, living a normal human life.
–
We see Him, at the tender age of 13, in the Temple, asking the doctors of the law questions.  Now, He was more intelligent BY FAR than all these men put together!  He could have “Lorded it over them,” so to speak.  But He didn’t. When they had no answer to His questions, they asked Him what he thought. He answered them with such great wisdom that they marveled!

What excellence! What majesty and moral glory! He humbled himself, respectful of the men assembled who were physically his elders.  It would have been wrong at that time for Him to, say, preach the Sermon on the Mount; “Blessed are the poor in spirit…!”, etc., to them.   Can you imagine a boy of 13 doing that? By asking and answering questions, He humbled Himself and accepted His place as befitting a 13-year-old boy.
–

Jesus Knew His Real Father.
It was a couple of days before His parents noticed that Jesus was not among their friends and neighbors traveling back to Nazareth. Naturally, they turned around and came looking for Him, and were amazed to find Him in the Temple.

Jesus was shocked at their surprise. “Did you not know that I must be about my Father’s business?” He said to them.  He is His Father’s son, after all; and remember, He was on loan only for a short time. This shows that He knew, even that young age, Who His real Father was!

This is a picture of the Jewish people who, for “2 days (2,000 years)” did not realize they were traveling the road of life without Jesus. It is when they turned back to Jerusalem, the city of peace, and searched for Jesus, finding Him in the Temple, that they saw clearly Who He is: God in human flesh, their Messiah!

The Greek Text.
If you study the Greek in the very first verse of John 1, you’ll see that there is no definite article, “The.” It simply says, “In beginning: En archē (Ἐν ἀρχῇ).”  A definite article would indicate that somewhere in the beginning, Jesus began to exist. But that isn’t the case. He ALWAYS existed, together with the Father.  Translators added the word, “The,” because it flows better in English.  You can tell they added the word because it is in italics.  Unfortunately, it conveys the idea that maybe Jesus didn’t always exist; that He had a beginning.
–
More than any other gospel, John showcases Jesus’ divinity, though there are many instances of things He did recorded elsewhere, things that only God could do.
–
You may follow the link below to Part 4 where we’ll take a closer look at the Gospel of Matthew.

7 thoughts on “The Gospels Part 3 of 9: Genealogies”