Hebrews 9:15
15″ And for this reason He {Jesus} is the Mediator of the New Covenant, BY MEANS OF DEATH, for the redemption of the TRANSGRESSION UNDER THE FIRST COVENANT, that those who are called may receive the promise of the eternal inheritance.”

When Jesus cried “FINISHED,” the work of redemption was complete.  No doubt about it.  Even so, there were still a few more things for Him to do.  Yes, He had fully paid for for every sin and reversed every curse.  But there was an innumerable company of saints who had died before Jesus shed His blood. They had been waiting a very, VERY long time for this day to come; and now it was here!  HE WAS HERE!

Where was, “HERE?”  The place where believers went who lived before Jesus died:  Paradise.

Now, you and I, Church, look back to the cross, to Jesus’ finished work because we live AFTER He shed His blood.  The Old Testament saints, however, looked FORWARD to it, believing in the Messiah God would send one day.  Every bullock that was offered, every lamb or goat, every pigeon or turtle dove that was sacrificed, every grain and every drink offering were all like “Promissory notes,” if you will, of a redemption that was future to them.  Well, Jesus was here NOW to “Cash them all in!” 💖🙌🏻

(Those who are interested in further study may follow the link below to learn more about the Five Offerings of Leviticus:

The Bosom Of Abraham.

The Jewish people often called Paradise, “The Bosom of Abraham.”  Jesus talked about this place as did the Holy Spirit.  We find His discourse on the subject in the story of the Rich man and Lazarus in Luke 16.

Remember Lazarus?  He was the poor man who sat outside the rich man’s gate and was abused by Him.  Now please understand, God has nothing against rich people.  Nothing at all, in fact.  Money is, never was, and never will be the problem.  But the love of money sure is.  God is, however, opposed to greed and selfishness.

The Rich Man And Lazarus.

Jesus had begun teaching in the Temple two chapters earlier, when He dealt with the rich young ruler.  The Pharisees at that time were His primary audience.  But they weren’t the only ones listening in.  As soon as they left, the tax collectors and sinners drew near to hear Him teach.

He proceeded to tell them the three parables of Luke 15, which ends with the story of the Prodigal Son.  Then, in chapter 16, He recounted the story of the rich man and Lazarus, which is not a parable but an account of events that happened to real people in the real world. 😮

He began by saying these words:  “A certain man.”  That’s how we know that the story He was telling was not a parable:  It was a real-life event about things that actually happened to actual people, which makes it even more compelling! 😮 Let’s follow the story…

“So it was that the beggar died, and was carried BY THE ANGELS TO ABRAHAM’S BOSOM.”  The rich man also died and was buried…”

Where was “Abraham’s bosom?”  Where Abraham was:  In the place Jesus called “Paradise.”   This place is not heaven because believers before the cross still had sin.  Those sins were covered by virtue of their offering right sacrifices to God.  But because their sins were not cleansed, they did not qualify to go to heaven as believers after the cross do when we die.

In Paradise, as in heaven, there was no suffering because their sins were not imputed to them.  They were laid on Jesus Who would one day die for them.  All these saints of the Old Testament believed the gospel story, the very same one you and I believe.  And they were all there, waiting for Messiah to come.

Heaven And Hell Are Real Places.
23 “And being in torment in Hades, he {the rich man} lifted up his eyes {Ah! You have eyes!} and SAW Abraham afar off, and Lazarus in his bosom.”
–

Paradise is in the same location as hell, somewhere “Down there,”👇🏻 below us.  In Luke 16 you can see there is a great gulf in between the two sides.  Occupants of both places were obviously aware of those from the other and could, in fact, see each other.  It is still there, though now it is completely empty.  HALLELUJAH!

Jesus mentions hell several times.  Why?  First of all, because He loves us.  It is a place that was designed for the devil and his angels.  It was never meant for man to occupy.    Secondly, He doesn’t want any of us to go there because it is a very real place where the worm dies not and there is only fiery, eternal torment.  There is only weeping and gnashing of teeth. 😭

Likewise, heaven is a real place, not a spirit-like, whispy, casper-the-ghost kind of ethereal world.  If it was, where would the real, flesh-and-blood body of our risen Lord Jesus go?  If Jesus says hell is a real place, WE SHOULD BELIEVE HIM.  He’s THE MOST reliable witness we know!
–

God housed all the departed spirits before the cross in either paradise or hades. Both are referred to in scripture as “Sheol.”  Remember where the Bible says that “Jesus ascended up on high?”  If He ascended, He also descended into the lowest parts of the earth,” in Ephesians 4:9-10.

Jesus Did Not Go To Hell.

Understand this:  It doesn’t say that Jesus went to hell.  THE SUFFERING OF THE CROSS WAS FAR MORE THAN ENOUGH!!!  When He “descended” He went to paradise to free the old testament saints who had been looking forward to Jesus’ finished work!

The Holy Spirit says in the passage above that the rich man “Looked,” so obviously, in both heaven and hell, you have eyes. 👀  You can see and recognize others. He both saw and recognized Abraham and Lazarus in his bosom. Let’s continue the story:

…24″ Then he {the rich man} cried and said. “Father Abraham, have mercy on me, and send Lazarus that he may dip the tip of his finger in water and cool my tongue; for I am tormented in this flame”……

(The rich man cried out in torment to Abraham.)

See?  You are NOT a blob! Departed spirits have form.  They see, they can recognize!
Your physical body is actually just a reflection of your spirit.  It’s just like you.  It looks like you but without the outer shell that hinders it now.  In your spirit form, you either have an overwhelming sense of well-being because you’re in heaven…..or you are in unrelenting, unthinkable torment that will NEVER end.  😭  Back to our story…

Vs.25″ But Abraham said, “Son, remember that in your lifetime you received all your good things, and likewise Lazarus evil things; but now he is comforted and you are tormented.
26” And besides all this, between us and you there is A GREAT GULF FIXED, so that those who want to pass from here to you cannot, nor can those from there pass to us.”

In Sheol, those who are in the suffering side, “Hell,” cannot cross over the great gulf that separates them from Paradise, and visa versa, though they obviously can see one another.  That would explain all the “Weeping and gnashing of teeth.  Those in hell could see those in Paradise and eternally know it’s too late. 😭

Jesus descended to Paradise and announced to the Old Testament saints, “I AM HERE!” to the great shouts of “HALLELUJAH!” from these who had looked forward to this day.  He showed them His wounds to their wondering amazement and cashed in all their “Promissory notes!” 💖💖💖🙌🏻🙌🏻🙌🏻

–
Message To Fallen Angels.
The only business He would have with the suffering side of Sheol was to announce to the demons who refused to keep their place–you know; the fallen angels who fathered the Nephilim, Anakim, and Rephaim–(YUK!!!) “I AM HERE!!!”
–
You see, they had tried to pollute the human race with their demon seed in order to stop THE ONE, Jesus, from being born.  They knew The Champion was coming to crush the head of their “boss,” that old serpent, the devil.  Well, HALLELJAH…..THEY FAILED!!!
–

(For more info on the demon/human hybrids–/Anakum/Rephaim, you may refer to the article below on the days of Noah:  https://emmausroadministries.wordpress.com/2016/04/14/as-it-was-in-the-days-of-noah-flood-series-part-7-of-8/)

As He rose from the dead, Jesus took with Him ALL the occupants of Paradise; completely emptied it out.  Some of them had actually already been raised from the dead the moment Jesus died.  Though they had not yet emerged from their burial caves, they were alive inside their tombs, waiting for Him to emerge first, for He must always be preeminent!

After He walked out of the garden tomb that glorious resurrection morning, all those Old Testament saints walked out of theirs and, for 40 days, made personal appearances all over Jerusalem!  It is recorded below in Matthew 27.  Awesome! 😮

–
When Jesus ascended back into heaven, this is the “great cloud of witnesses” that accompanied Him. Some of their names are mentioned in Hebrews 11:  Great saints like Abraham, Isaac, Jacob, David.  It’s a long and prestigious list.

Bodily Return.
In like manner as they saw Him go–BODILY–our precious Jesus will return–BODILY–at His second coming.  EVERY EYE ON EARTH WILL SEE HIS SECOND COMING. He will rescue Israel before she is destroyed by all the armies of the world that have converged on her to try and wipe all the Jews off the face of the map.
–
THEY WILL UTTERLY FAIL!!!…..AGAIN!
– 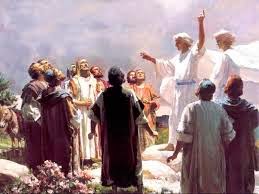 You and I, Church, will be right beside Jesus, having been raptured earlier.

One day very soon the Church will suddenly just disappear.  Now you see us; now you don’t.  The world will not see us go up.  Good thing because it would freak them out!

Unlike the second coming, the world will not see or hear Jesus.  He will come mid-sky and shout for us.  In the blink of an eye, we will be physically transformed and He, Who created the law of gravity, will reverse it and we will ascend to Him.

Up to this point in time, we have been resurrected spirits in unresurrected bodies.  But at that moment, in an atomic second, He will give us our new, eternal, incorruptible, forever young, forever beautiful bodies!  No more sorrow, no more sickness, NO MORE DEATH…..FOREVER!!!

…..AND SO WILL WE ALWAYS BE WITH OUR LORD.  HALLELUJAH!!!

(Jesus returns to rescue Israel with ten thousands of His saints.)
–
Because of Jesus’ finished work, HALLELUJAH, we do not need Promissory Notes!