Skip to content
John 11:1-4
“Now a certain man was sick, Lazarus of Bethany, the town of Mary and her sister Martha. It was that Mary who anointed the Lord with fragrant oil and wiped His feet with her hair, whose brother Lazarus was sick. Therefore the sisters sent to Him, saying, “Lord, behold, he whom You love is sick.”
When Jesus heard that, He said, “This sickness is not unto death, but for the glory of God, that the Son of God may be glorified through it.”
– 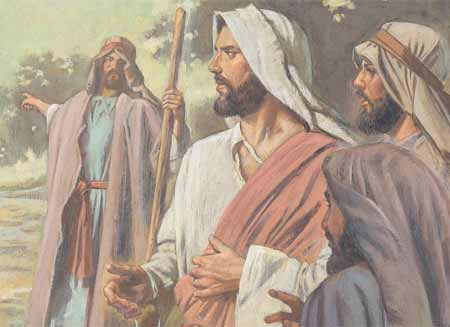 –
The story of Lazarus is one of the most famous of all Jesus’ miracles, and it is recorded in only one place:  Right here in the Gospel of John.
–
The NON-Synoptic Gospel.
His gospel is quite unlike the other three.  Matthew, Mark and Luke are known as the “Synoptic Gospels;”  “Syn” meaning, “together;” optic meaning, “to see.”  They are “seen together,” and parallel each other in many ways. Though there are things that are unique to each of the four gospels, 95% of John is not recorded anywhere else. 😮 By comparison, 95% of the things recorded in Mark, for instance, are found in the other three.
–
Because this is another whole subject in and of itself, we’re not going to discuss it here.  Anyone wanting to know more may follow the link below:
https://emmausroadministries.international/2016/05/07/the-gospels-part-3-of-16-rightly-dividing-the-word-of-god/.
–
That is why John, more than the other three, is known as the gospel of Grace.  In fact, his name means “The grace of God! “
– 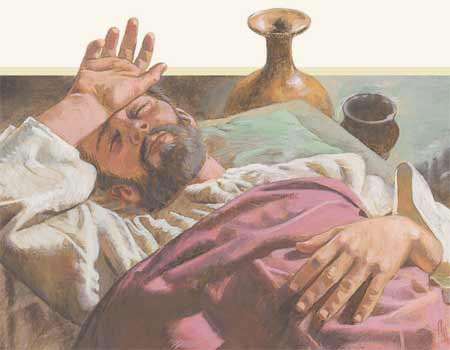 –
Prophetic Timeline.
Kind of strange that Jesus didn’t run right over to Bethany when He first heard Lazarus was sick, isn’t it?  In fact, He stayed where He was for two more days; then went to his house.  It almost seems like He was waiting for him to die. 😮
So where was He?  😳
If we back up a few verses to the end of the previous chapter, we will see.  He had traveled to the **other side of the Jordan River at the place where John was first baptizing.  (**Remember this for later.)  That’s the exact location where Jesus was baptized and the Holy Spirit given to Him without measure. 🤔
–

By the time He arrived in Bethany, Lazarus, His very dear friend, was not only dead…he had been dead and buried for four days! 😲 Why did He tarry?

–
Miracles Are Signs.
In the 2nd chapter of John, he says in verse 11 that “This beginning of signs Jesus did in Cana of Galilee, and manifested His glory;”
–
John was referring to the miracle of turning water into wine.  But notice, he didn’t call it “A miracle.”  He called it “A sign.”  That means ALL of the miracles recorded in John are SIGNS, meaning they “signify” something deeper:  A spiritual truth and/or something prophetic.  They weren’t recorded simply because Jesus did these wonderful miracles, though He most certainly did. These particular ones were hand picked by Holy Spirit because He has something important in mind for us to study and learn.  Let’s find out what that is.💡😃

3 Resurrection Miracles.
There are three miracles recorded for us where Jesus raised people from the dead.  Three “happens” to be the number of resurrection in Bible numerics.
–
(For more on the meaning of numbers in the Bible, you may follow the link below: https://emmausroadministries.international/2016/06/16/numbers-have-meaning//)
–
It is no coincidence that the three people He raised from the dead: Lazarus, Jairus’ 12-year-old daughter, and the widow of Nain’s son, are recorded ONLY in John’s gospel.  You see, there were many naysayers and leaders of the Jews who were skeptical of Jesus.  They might be able to explain away the widow’s son and Jairus daughter.  They had been dead for a much shorter time.  But not Lazarus:  He had been dead and buried for four days! 😮 His resurrection could only be interpreted as a miracle.  It was something they could not explain away, which made them really angry.  Pretty hard-hearted!
–
God Glorifes His Son.
Jesus wasn’t at all worried about Lazarus.  Notice what He said in John 11:4; “This sickness is not unto death, but for the glory of God, that the Son of God may be glorified through it.” So why did He weep if He knew He was going to raise him from the dead?  Because death is an enemy.  God never meant for man to get sick, or to suffer and die.  Sin brought all that nonsense on the human race, not God.

Multi-Layered Storehouse.
The Bible is a multi-layered storehouse full of hidden treasure. There are many applications and lessons to learn. This book is so unique in that it can speak to the reader in different ways at different times. No other one the planet can do that!
–
Everything documented within its pages contains the surface story.  The surface account showcases Jesus’ love for Lazarus and his sisters, Mary and Martha. More truths are found in the meanings of names in Hebrew.  Still others are found in the meanings of the numbers in the text.  There is absolutely nothing in the Bible is arbitrary or recorded just to make the book thicker. 😮
–
Lazarus’ name, for instance, means, “Helped.”  Apt description!  He was most certainly “helped!”  But the three of them are also a picture and a story of something else entirely.
–
Four Layers Of Bible Study.
According to the Jewish Rabbis, there are four levels of Bible study.  #1:  The first level is called “P’shat” (pronounced peh-shaht’).  It means “Simple.” This is the surface story.  #2:  The next level of study is called,“Remez”  (pronounced reh-mez’) meaning “Hint,” where there is another or “implied” meaning.  #3: D’rash (pronounced “deh-rash) is also called “Midrash.” This layer uses scripture to interpret itself.
–
#4:  The 4th layer of Bible study is called the “Sod”  (pronounced “sewd or sood”.)  It Means “hidden.”  In this layer of Bible study are found the hidden, secret or mystic meanings of the text.
–
(For a more in-dept study of this topic and an excellent example of the “Sod” layer, follow the link below:
https://emmausroadministries.international/2016/06/26/eutychus-the-story-behind-the-words/)
–
It is this layer that I’d like for us to explore.
–
Story In The Sod.
In this layer of our story is found another of God’s amazing timelines, a depiction of Israel and a description of the end-time Church.  These are all coming to pass now, on our times.  Exciting! 😁💖

–
Shepherds Who Will Feed My Flock.

You may or may not know that there is a revival of epic proportions sweeping across the globe, like so much holy fire.  There are reports of miracles, people being set free from addictions and bondages, physical healings of all kinds, marriages and relationships being restored, and people falling head over heels in love with Jesus. 💖
–
Just as He promised, in these last days, God has also sent us shepherds who will feed the flock, not beat them with the law.   (See Jeremiah 23:5-6)
–
In America, we saw this happen in our 2016 elelction. Amazingly, our new President’s speech sounded an awful lot like the firsts few verses in Ezekiel 34!

A Little History.
In that garden of long ago when man fell, the human race came under God’s judgment. Unless His covenant people offered the right sacrifices, they were doomed.  Before Jesus shed His blood, those sacrifices reminded God of His Son and the work He would do at the cross. They were like promissory notes of a redemption that was future to them.
–
As promised, in the fullness of time, He sent Jesus into the world to redeem us.  He offered one sacrifice for all time and SAT DOWN.
–
A Good Beginning Until…..
On the day of Pentecost, the Church was born and off to a great start. But as you know, it didn’t take too long for the law to creep back in by stealth, putting believers back under bondage.
Just like Israel and the Old Testament saints, the curse began operating in believers’ lives who were trying to work to be acceptable to God. This is the subject of the entire book of Galatians.
–
For centuries, the Church was hobbled by the mixing of Law and grace, unintentionally you understand.  Pastors were simply trying to lead their people the only way they knew how.  Unfortunately, law was a big part of that and became something which kept her from being an even greater force for good in this dark world.
–

–
The End Times.
But in these last days, just prior to Jesus’ return, which He is delaying, the REAL GOSPEL is making a world-wide resurgence!  Jesus has “tarried” on the “other side of the Jordan” (in Heaven) for “two days.”  According to 2 Peter 3:8, a day to God is “AS” a thousand years and a thousand years as one day.”  By that reckoning, Jesus has been gone “two days.”

–
When 21st century dawned, we crossed over into the early morning hours of the 3rd day since He died, as God counts time.  In fact, it is very, VERY EARLY in the morning on the 3rd day.  Jesus will call for us very soon and we’ll be with Him for ever…..RAPTURED!
– 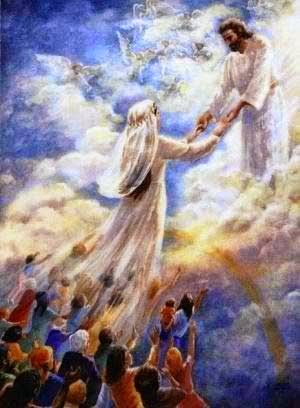 –
The Church is in the process of being brought out of bondage to the law, depicted by the tomb of Lazarus.  Mary, Martha, and the friends there with them are a depiction of the Church that is not in bondage.

Jesus commanded them (His Church) to remove the “Stone” (the law) from the entrance to the tomb and remove the “Grave clothes” that had him bound.  This is a picture of those who’s faces are still covered by the “veil, meaning “Legalistic thinking.”  Only those whose faces are unveiled can remove the “veil” from the faces of their brethren.

You see, there are many believers that, though they are born again, still think they are under the Law; that they must obey it in order to be acceptable to God. 🥺 They’re alive but still walking around, as it were, in their grave clothes. They need someone to remove their clothes of death. They cannot do it for themselves.
–

Natural Israel.
This story is also a picture of Natural Israel.  For 2,000 years, Jesus has been working among the Gentiles.  That’s why He was on the “Other side of the Jordan.”  That’s what He was doing for those “Two days: 2,000 years.”
–
But after the Church is raptured, He will turn back, cross over the Jordan and work once again among His natural family, resurrecting them to life eternal as born again believers.

Fortunately, in our day, more and more Jewish people are finding out that Jesus is their Messiah.  Many already know Him!  But the ones who don’t will be left behind during the worst of times to hit planet earth:  The Great Tribulation, the last seven years before Jesus returns to rule the world.
–

–
After those days, we will return with Jesus in His second coming, and rescue Israel before she is completely destroyed.  The entire nation will be saved in one day. 💖 They, too, will at last have their grave clothes and veil removed.
–
HALLELUJAH!  Thank God that in these last days, the Church is coming into her own.  Many of her people, both Jew and Gentile, are hearing the voice of Jesus Who says to them, “Lazarus!  Come forth!!!”

3 thoughts on “Lazarus! Come Forth!”