Matthew 2:1-2
“Now after Jesus was born in Bethlehem of Judea in the days of Herod the king, behold, wise men from the East came to Jerusalem, saying, “Where is He who has been born King of the Jews? For we have seen His star in the East and have come to worship Him.” 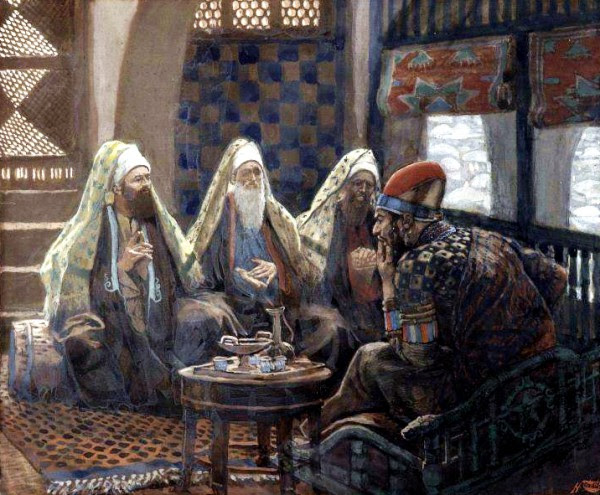 The Holy Spirit has carefully crafted each Gospel to show us different aspects of our Lord Jesus.  Each one contains stories that are unique to it. The first three have many stories in common, though told from their own unique perspective. John, however, stands alone as being almost entirely unlike the other three.

Gospel Of The King.
Speaking of uniqueness, the only place in the entire Bible where you find the story of the wise men from the East is in the opening Scripture from the Gospel of Matthew. In the very beginning of chapter 2 it says, “Wise men from the East came to Jerusalem, 2 saying, ‘Where is He who has been born King of the Jews? For we have seen His star in the East and have come to worship Him.’”
–
Did you catch that? They didn’t say He was “born TO BE King,” but “BORN KING.”  How appropriate that this event is recorded here, because Matthew is the all about Jesus as King.

Jesus did not come to earth to be crowned king; He already was King.  He was always Royalty!  In fact, His parents, not Herod, were the true royal couple.  They should have been reigning on the throne in Jerusalem instead of Herod as they were direct descendants of King David.  Why, Herod wasn’t even a Jew!
–
(For more on that topic and some very interesting, though little known, history, follow the link below to the article on “Chimham’s Inn:

Matthew, you recall, was a tax collector.  While we in our society take a dim view of tax collectors, it was far worse in ancient Israel.  Matthew had to do some really terrible things, like renounce his people, his friends and family, his nation, and his God.  He had to swear absolute allegiance only to Rome and to Caesar.  They were so reviled that they were considered as even lower than prostitutes.

No wonder they were hated and ostracized. They were technically traitors to their own nation. Though they may have gotten wealthy from this despicable profession, it came at great cost. 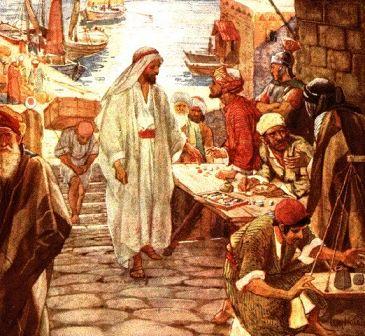 Imagine how Matthew felt as he wrote the words below about himself in chapter 9, thinking back to the fateful day Jesus came walking by:

“9 As Jesus passed on from there, He saw a man named Matthew sitting at the tax office. And He said to him, “Follow Me.” So he arose and followed Him.”

I wouldn’t doubt that he had tears in his eyes as he put those words on paper.  Up until that time, no doubt he had lost all hope of ever going to heaven.  After all, he had renounced God, right?  Then one day, this wonderful Man, Jesus, walked into his life and extended pure grace to him.  He didn’t flinch one bit but left everything immediately and followed Jesus, inviting Him to come his home, which He did.  Matthew threw a party in His honor and invited all his friends, most of whom were either fellow tax collectors or prostitutes.  The two professions kinda went hand in hand. 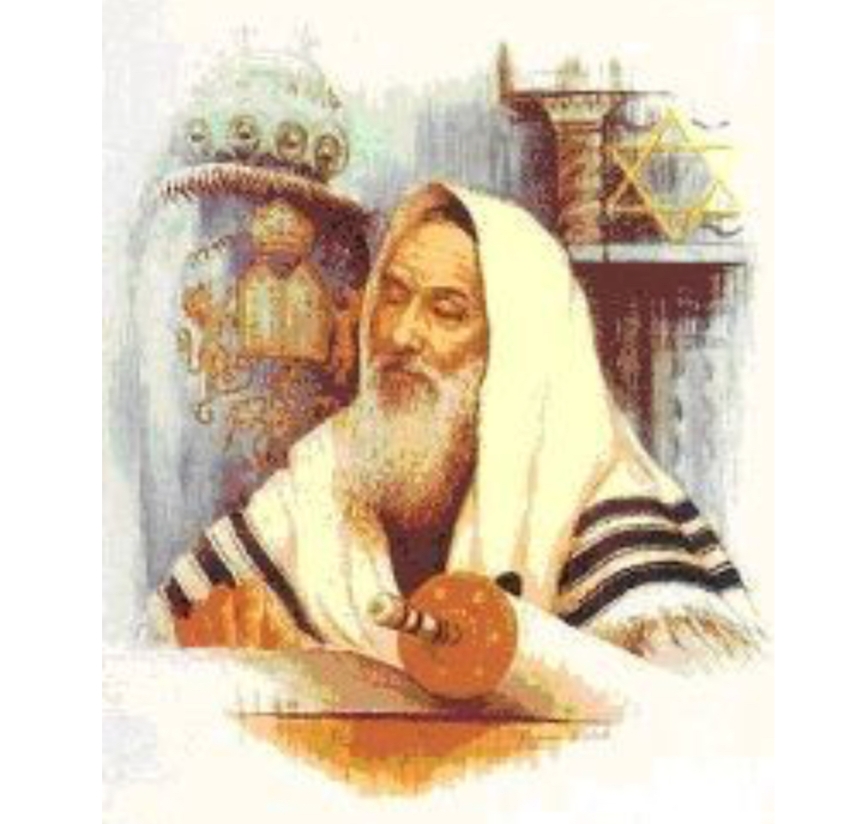 Jewish Gospel.
It bears repeating that this Gospel is Jewish in nature.  That is why the phrase, “Kingdom of God,” is never mentioned because the Jewish people don’t like to use God’s name for fear of blaspheming Him.  Even today, in their books or documents, they will write either “G-d, kingdom of Heaven,” or refer to God as “the Name: haShem.”  Matthew understood this reticence of theirs very well and wrote his account with that in mind.
–
Contained therein are these four things: 1) The genealogy of the King; 2) The constitution of the King; 3) The deeds of the King, and 4) The plan of the King hidden in the parables of chapter 13.
–
#1) Pedigree/Lineage Of The King.
Because Matthew is the Gospel of the King, in verses 1-17, he records the genealogy of The King, from “David, the son of Abraham, to Joseph the husband of Mary.”  Why is Joseph’s line documented?  Because even though he provided no seed, nevertheless, Jesus was born into his household. It proves that through both parents, Jesus had a DOUBLE CLAIM to the throne of King David.
–
As you saw in part 3, Matthew lists David’s name first, then Abraham because through David came the right of kingship. Abraham was promised the land by God, proving Jesus’ claim to it. When He returns as King to set this world right, He will rule over the whole earth, seated on the throne of His father, David.  He will set up His capitol in Jerusalem which was promised to Abraham and his seed forever. 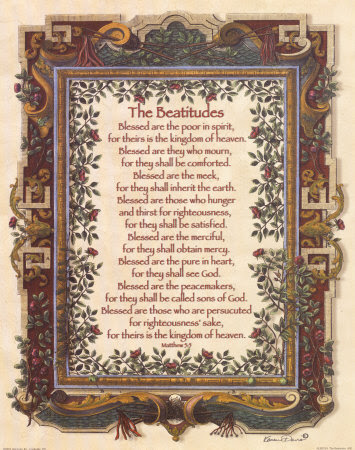 #2) The Constitution Of The King.
In the sermon on the Mount, Jesus shares with us the Constitution of His Kingdom. Because Jesus was rejected as their King, this kingdom is now in temporary suspension, until He returns at the end of the 7 years of tribulation.

–
This is another whole subject, in and of itself, which I will not go into here. If you’re interested in more on that topic, you’re welcome to follow the link below:
https://emmausroadministries.wordpress.com/2016/05/07/the-gospel-of-the-kingdom-part-8-of-16-rightly-dividing-the-word-of-god/

#3) The Deeds Of The King.
Matthew 7:28-8:4
“And so it was, when Jesus had ended these sayings, that the people were astonished at His teaching, for He taught them as one having authority, and not as the scribes.”
8:1 “When He had come down from the mountain, great multitudes followed Him. And behold, a leper came and worshiped Him, saying, “Lord, if You are willing, You can make me clean.”
Then Jesus put out His hand and touched him, saying, “I am willing; be cleansed.” Immediately his leprosy was cleansed. –
And Jesus said to him, “See that you tell no one; but go your way, show yourself to the priest, and offer the gift that Moses commanded, as a testimony to them.”

–
Right after the Sermon on the Mount, which outlined the constitution of the King, Matthew begins to record the Deeds of the King.

Throughout the middle of Matthew are all kinds of miracles.  Immediately after the Sermon on the Mount, He turned around, AWAY from the crowd, and began to demonstrate what the world would be like with Him in charge.

Jesus In Charge.
The first thing He did was to heal a leper, who had probably been hiding behind a rock on the other side of the mountain.  He had obviously been listening to every word.  Jesus must have known he was there because He came down that side of the mount where He would pass right by the man, and he healed him!
–
We see Him going here and there, healing the sick, raising the dead, casting out demons and cleansing lepers.  Think about it!  What would the world would have been like had He been in charge for the last 2,000 years?  We can see what a wonderful world it would have been! 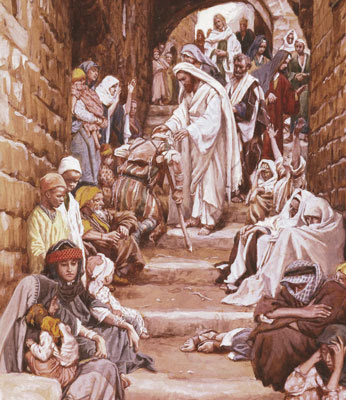 The Plan Of The King.
Matthew 13:10-11
And the disciples came and said to Him, “Why do You speak to them in parables?”
He answered and said to them, “Because it has been given to you to know the mysteries of the kingdom of heaven, but to them it has not been given.”
–
In this chapter, Jesus lays out the plan of His kingdom. It is hidden from view of the general public because Israel largely rejected her King.  This is why He began to speak to them in parables so that seeing they would not see, and hearing they would not hear.  This was the kindest thing He could do for them because if they fully understood, it would make their guilt in rejecting Him greater.  It was both a kindness and a judgment.
–
The kingdom parables of Matthew 13 reveal that the Gospel would first be given to the lost sheep of the house of Israel.  They are the treasure hidden in the field, in vs. 44.

Because of their ultimate rejection of Jesus as their Messiah, God would give the Gospel to the Gentiles.  They, too, would be offered a chance to be saved from their sins.  They are “The pearl of great price,” spoken of in verses 45-46.

When Jesus returns after the seven years of tribulation, the gospel will go throughout the whole world and nations will be saved!  That is the dragnet spoken of in verses 47-48.

Please follow the link below to Part 5 where we’ll take a closer look at the Gospel of Mark: