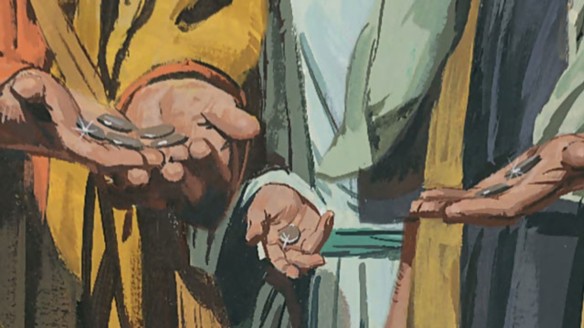 –
Talents and abilities come from God. Everyone may have the same opportunities as everyone else, but each of us has different abilities. Some have more natural talent than others but each can function to their greatest abilities if they so desire.
–
This story, however, is more than simply a lesson about money. The talent was not only a unit of money in Bible times but also a measure of weight.
–
Different Talents, Different Abilities.
The first recipient was given FIVE TALENTS of gold. Why five? As many of you know, it is the number of Grace, while Gold in Biblical typology is a picture of God’s divine nature.
–
Think for a minute: Who possesses the full measure of God’s grace and the full measure of God’s divinity? Jesus, the beloved Son, of course! He was perfectly Holy, perfectly at rest at all times, and perfectly able to perform all 10 Commandments, hence the mention of the number “10.”
–
The second man received two talents and faithfully put them to work immediately, doubling his Master’s money. In other words, he doubled the outreach and influence that was given to him. The result? His master was very pleased with his works!
–
Why two talents? Because this a picture of the Church. We are the beneficiary of TWO THINGS: Jesus’ death (#1) and resurrection (#2). What do we do with our two talents? Mirror Jesus in all that we do to the best of our ability and reach the world for Christ.
–
Use It Or Lose Everything.
Sadly, the one who received the one talent saw him as a hard task master, not a loving father. He did worse than nothing with what he was given: He buried it in the ground! It’s clear that this servant’s relationship with the master is rooted in fear, and not the good kind.
When the Master returned, he was understandably very displeased with the unjust servant, so his talent was given to the one who had 10. He who is faithful will have abundance, but he who is not shall not prosper.
–
The message is, “If you don’t use it, you will not only lose the gift you were given: You will lose everything!
–
This is a picture of the unregenerate. They have been offered the gift of salvation but did nothing with the gift except bury it in the ground. They will be cast into outer darkness (Hell) where there is weeping and gnashing of teeth, forever separated from God. 😭
–

–
First Mention.
This reminds me of the first time the word, “Talent,” is mentioned in the Bible in Exodus 25. It is the chapter where God spoke to Moses about how to fashion the Menorah for the Tabernacle.
–
There is a “Law,” if you will, in the interpretation of scripture which states this: “The first mention or occurrence of a subject in Scripture establishes an unchangeable pattern with that subject.  It remains unchanged in the mind of God throughout Scripture.”  This law is the key to revealing truths hidden in the Bible in the meaning and of words, names, places, and even numbers.
–
What is interesting to note is that we are given the weight of the lampstand but not it’s dimensions. Let’s read the passage below and you will see:
–

–
Ex. 25:31 “You shall also make a lampstand of pure gold; the lampstand shall be of hammered work. Its shaft, its branches, its bowls, its ornamental knobs, and flowers shall be of one piece.
Ex. 25:39 “It shall be made of a (one) talent of pure gold, with all these utensils. And see to it that you make them according to the pattern which was shown you on the mountain.”
See? Weight but no dimensions. Why? Because it’s not the size of your church or ministry that matters: IT IS THE WEIGHT THAT IT CARRIES.  In other words, how influential it is in your community has nothing to do with the size of your Church or ministry.  It is God Who gives weight to your words or causes them to fall to the ground.
–
(For more on the Lampstand, you may follow the link below:
https://emmausroadministries.wordpress.com/2016/03/30/the-lampstand-tabernacle-series-part-3/)
–

–
Just And Unjust Servants.
The one talent also demonstrates that pastors who beat the sheep instead of feeding them will not prosper. You see, Our Father loves His people: His sheep! He wants them to be fed, not beaten.
How are they being abused? Their pastors are preaching the Galatian heresy, i.e. Grace mixed with law, that Paul addressed in the book of Galatians. They will find that their ministry will dry up and their churches shut down. In other words, their “Talent” will be given to another.

Now, they will not lose their salvation and be damned for all eternity. That’s impossible for believers. Because of Jesus, there is NO MORE CONDEMNATION EVER!

–
To those who honor the truth of God’s word and preach Grace, God gives great weight and honor. Some people’s words are weightier than others, meaning THEIR WORDS AND TEACHINGS ARE MORE VALUED OR HONORED.
–
However, as for those who come against grace, God causes their words to “Fall to the ground.” They have little or no impact. Eventually, their Church or ministry will dry up and their congregations will go some other place where they will get fed.

So, whatever your talent or ministry, do it to the best of your ability. Don’t worry about your detractors. You just be true to God and to His word and He will take care of the rest. He, after all, is the Lord of the Talents!