“Now if God so clothes the grass of the field, which today is, and tomorrow is thrown into the oven, will He not much more clothe you, O you of little faith?” 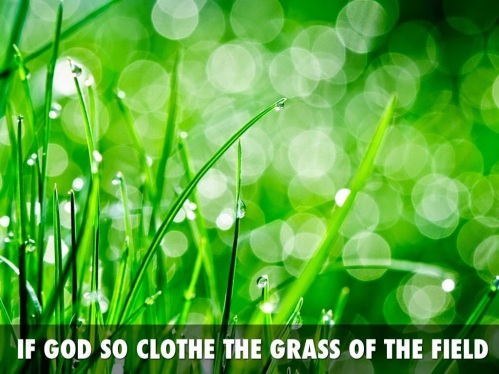 I have heard a sermon or two on this passage that left me feeling ashamed or that I had somehow let Jesus down. 😕  Have you heard similar messages where the preacher was pointing at you, making you feel like your Faith was inadequate?  Accusation, accusation, accusation, implying you don’t measure up and that God is, if not angry at you, at least mildly disappointed. 😓
–
Not From God.
You may be surprised to hear that God doesn’t accuse us or imply such things.  We know who the real accuser of the brethren, right?  Yep:  The devil.  Sadly, he often has the unwitting, though well-meaning, help of sincere men and women of God from the pulpit. 😕
–
If you have been hearing that kind of condemnatory preaching, be assured of this:  It wasn’t a message from God.
–
Why Is 5 The Number Of Grace?
“Well,” you ask, “If Jesus wasn’t pointing out our level of faith, just what did He mean when He said “O ye of little faith?”  That’s a great question!  I’m glad you asked.  Since the Bible is it’s own best commentary, let’s find out what it has to say.
–
This phrase is spoken ONLY by Jesus in the Bible.  He says it FIVE separate times in fact.  Well, Church;  Five is the number of grace!  Why?
–

–
Hebrew is a language of picture writing, like Chinese.  Each of the 22 letters is a picture of something.  They are very consistent.
Unlike here in the West, letters of their alphabet are used for numbers.  The fifth letter is “hei-[ה].”  It’s a picture of an open window, reminiscent of God opening the “windows of heaven,” in Malachi 3.  And what does He pour out of those windows?  So many blessings that we would not be able to receive them all.  In other words, He pours out His GRACE from the windows of heaven!  Hence, FIVE IS THE NUMBER OF GRACE!
–
You see other indications throughout scripture that back up this assertion.  The very first mention of the word, “Grace,” in the entire Bible is in Genesis 6:8. It also happens to be the fifth time Noah’s name is mentioned: “Noah found grace in the eyes of the LORD.”
That’s our God!  He loves to hide things in the Bible for us to find, just so we will be delighted!
– 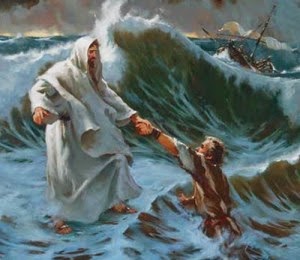 A Wonderful Way To Rebuke.
Notice that Jesus never says, “O you of little learning;” or, “you of little holiness:” or “you of little discipline,” or even  “you of little fasting.”
–
The Bible tells us that we receive everything from God by faith.  So, faith means “To take.”
–
What Jesus is really saying to His disciples is “Why do you trust in me so little that you take so little from me? Take more! Take more! Take as much as you want!”  What a wonderful way to rebuke, telling them they are not taking enough! 💖
–
Don’t forget, these men saw THE MOST amazing signs and miracles up close and personal for three whole years.  Jesus performed SO MANY in fact that, according to the gospel of John, if they were all written down, the world itself could not contain the books that would be written!  Whoa, AWESOME!
–
Jesus Wasn’t Angry.
Jesus wasn’t angry with His disciples.  FAR FROM IT!   He loved these men!  It’s more likely that He had a twinkle in His eye, amazed at their reluctance to believe in in Him.
–
With whom did He deal harshly?  The Pharisees:  But NEVER His disciples or the average Israelite.  I don’t believe He spoke to them in a harsh way but gently, lovingly, in an effort to help them understand, like you would do with a young child.
–
Here’s the thing:  Even though they walked with, ate, drank and slept with Jesus, heard His out-of-this-world wisdom DAILY and were witness to THE MOST INCREDIBLE, MIND-BLOWING MIRACLES too numerous to record, they still didn’t get it: That JESUS WAS ALMIGHTY GOD IN HUMAN FLESH!!!  He was incredulous! 😳
–

There are only a handful of miracles recorded in scripture.  Every one of them was documented by the Holy Spirit for a specific purpose:  To teach us something about our wonderful Jesus.  God isn’t One to brag, you see.

How We Bless Jesus.

Here are some examples of miracles he performed:
Jesus fed the 5,000, as documented in John 6:11:
” 11 And Jesus took the loaves, and when He had given thanks He distributed them to the disciples, and the disciples to those sitting down; and likewise of the fish, AS MUCH AS THEY WANTED.”
–
He is Yahweh Yireh:  the One Who provides.
– 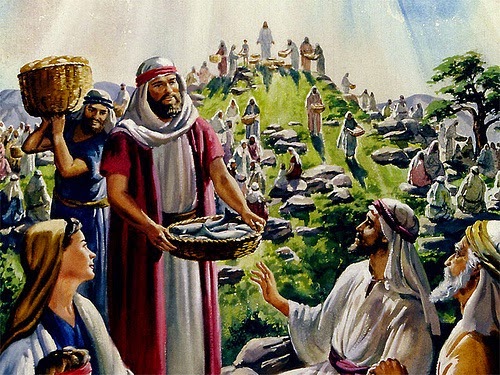 –
Notice, it was ONLY when the people had THEIR fill, that the supply stopped and still there were still 12 baskets-full left over!  The more we take from Him, THE MORE WE BLESS HIM.
–
Woman At The Well.
This principle is nowhere more beautifully portrayed as in this part of the story of the woman at the well in John 4:28-33:
–
28 “The woman then left her water pot, went her way into the city, and said to the men, 29 “Come, see a Man who told me all things that I ever did. Could this be the Christ?” 30 Then they went out of the city and came to Him.
31 In the meantime His disciples urged Him, saying, “Rabbi, eat.”
32 But He said to them, “I HAVE FOOD TO EAT OF WHICH YOU DO NOT KNOW.”
33 Therefore the disciples said to one another, “Has anyone brought Him anything to eat?”
– 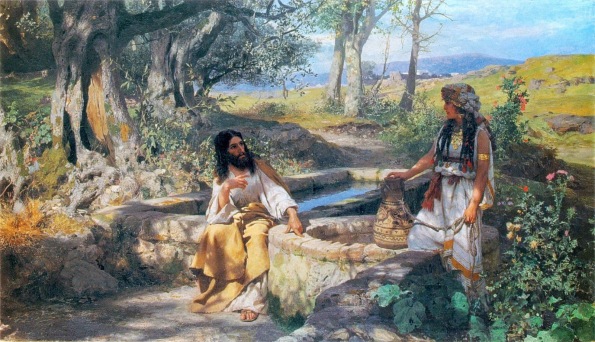 After a long, tiring trip, in the heat of the day, what was this “food” of which He spoke?  MINISTERING TO THIS WOMAN STRENGTHENED HIM! Amazing! 😲
–
Lesson Of Mary And Martha.
This is also evident in the story of Mary and Martha.  Martha was all about serving Jesus; Mary was sitting at His feet feeding off every word.
It is quite obvious which Jesus preferred. What ministered most to Jesus was not Martha’s sincere serving of Him but Mary’s allowing Him to serve her.
– 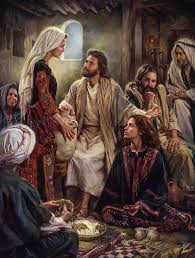 –
Though there is nothing wrong or harmful in serving Him, He much prefers we draw and take from Him.  Remember, He is the one who took five loaves and two fish to feed 5,000 men and their families.
–
Jesus Did Not Come Looking For Servants.
We’ve been taught all our lives that we must serve God.  It’s a hard concept for us to grasp what Jesus says point blank in Mark 10:45, “…the Son of Man did not come to BE SERVED, but to serve, and to give His life a ransoms for many.”. You see, it’s impossible to pour out of an empty vessel.  You must first be filled and THEN pour out of the abundance you have received.
–
Well, Martha skipped that part.  As a result, she ended up angry and bitter toward both Jesus and Mary because her “vessel” was empty.  She even angrily blamed them both on one shot!  That’s what happens when you attempt to serve without first being filled.
–
Of these two women, who was the one at the foot of the cross, prepared to serve Jesus in His darkest hour?  MARY.
–

–
What an awesome Savior we have! No wonder we trip all over ourselves wanting to serve Him:  BECAUSE HE SO LOVED US FIRST.
–
Perhaps our difficulty in understanding that He came to serve us is what causes us to “MISunderstand” what Jesus meant when He said to His disciples, “O ye of little faith.”