So far, we have discussed what the world was like at the time of the flood, Who was in the Ark during the flood, how the curse was reversed, the changes to the Jewish calendar, and some interesting things about doves.
In part 5 we’re going to talk about a covenant that remains in effect to this day:  The rainbow! 🌈

The Faithful And True.

Who are the ones that don’t keep their word, that need guarantees?  It’s US, people. We are the fickle ones.  We need to swear.  We are the ones who waver.  We lie, we cheat, we steal.  We are the faithless ones, not God.
So why, if He is Faithful and True, does He bother to swear at all and make covenants with man?  To reassure us, the unsure, unfaithful, wishy-washy ones. He does it for our benefit and peace of mind. 💖
–
Facts About Covenants.
Covenants in ancient Israel, as in cultures around the world today, are “Cut” with another person, tribe, or nation. Unlike a paper contract, which can easily be broken, there is a SHEDDING OF BLOOD involved to seal it.
Each person or tribal head made a small incision on their wrist, joined them together and mingled their blood, which was then considered to flow as one.
–
This is why marriage is a covenant, not a contract.
–

(David and Jonathan cut a covenant with each other.)
–
In the process of cutting a covenant, each also took off their respective outer garments and exchanged them, indicating a change of positions.  They exchanged their respective armaments and wore the other persons gear to demonstrate they now share mutual possessions, mutual enemies, and fought mutual battles of their (now mutual) enemies and, if one party suffered any lack, the other would provide for the one in need.
–
Jonathan and David made such a pact.
–
No More Judgment.
The Rainbow does not only refer to physical floodwaters, as the scripture below from Isaiah 54 gives witness.  The previous chapter, 53, describes more graphically than any other place in scripture Jesus’ sufferings.  Because of those sufferings, in the very next chapter, 54, God could declare the following in verses 9-10:
–
Isaiah 54:9-10
“9 “To me this {Jesus’ death on the cross, referring back to the previous chapter} is like the days of Noah, when I swore that the waters of Noah would NEVER AGAIN cover the earth.
So now I have sworn not to be angry with you,
NEVER TO REBUKE {condemn} you again.
10 Though the mountains be shaken
and the hills be removed,
yet my unfailing love for you will not be shaken
nor my covenant of peace be removed,”
says the Lord, who has compassion on you.”
–

The sign from God to Noah, and to all creation, of His covenant was the RAINBOW. 🌈  Again, don’t think of it as only a symbol of no more physical flood waters but of NO MORE JUDGMENT EVER…..Period!…for the believer, that is. 🙌🏻💖

The word for rainbow in Hebrew is, “Qeshet.”  It not only means “Rainbow,” like the one you see after a storm, but also the kind of bow from which you would shoot an arrow.  The passage above from Isaiah now takes on new meaning: That God will NEVER AGAIN shoot arrows of judgment at us or be angry with us!  It means NO MORE JUDGMENT!
–
Portent Of The Cross.
David, speaking prophetically of Jesus’ sufferings, says in Palm 42:7;
“…7 all thy waves and thy billows are gone over me.”
–
At the cross, you recall, everything went dark for three hours. During that time there was a storm of epic proportions. All God’s “Billows: wave after wave of judgment,” literally rolled over Jesus.  Tell me: What happens after the dark clouds clear and the sun begins to shine again as the rain drops linger?  A RAINBOW APPEARS! 🌈 I truly believe that after the clouds cleared, there was a rainbow above the cross as Jesus bowed His head.

Everything….ABSOLUTELY EVERYTHING IN THE WHOLE OF SCRIPTURE AND ALL OF HISTORY POINTS TO THIS ONE EVENT IN TIME.  All of history revolves around this moment in time. It is the single most important event.

As a result, God was able at last to shout to the whole world, “Finished!!! No more judgment!!!” At that very instant, the Father ripped from top to bottom that 8″ thick temple veil that had separated us from Him since the garden. HALLELUJAH!!!

Now, when the enemy tries to attack us, we have God’s seal of approval–a rainbow around our heads–to remind him that our debt with God is settled…FOREVER!

–
Isaiah 59:19
“19 So shall they fear the name of the Lord from the west, and his glory from the rising of the sun. When the enemy shall come in LIKE A FLOOD, the Spirit of the Lord shall lift up a standard against him.”
And…
Revelation 12:15
“15 Then from his mouth the serpent spewed water like a flood, to overtake the woman {a picture of the church} and sweep her away with the torrent.”
–
Standard Against The Accuser.
The rainbow is a standard that God raises up against satan, the accuser, who spews out a flood of words that accuse and condemn, and communicate shame in an attempt to deliver despair that he wants to charge to our account….BUT…..The flood is turned aside!
–
We need to continually remind ourselves that we are standing on NO CURSE GROUND;” that we have the standard of the rainbow 🌈 over our heads!  God will NEVER AGAIN BE ANGRY WITH US OR CONDEMN US.”
–
We raise up our shield of faith that we are the righteousness of God in Christ and quench all the fiery darts–flaming arrows–of the devil.  That’s how we walk victoriously through life.
– 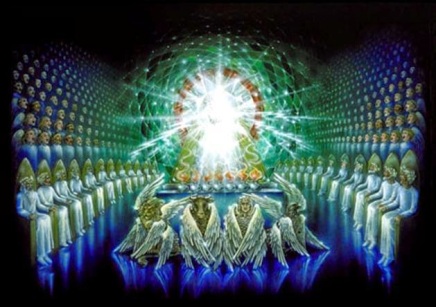 (The throne of God encircled by a Rainbow.)

Revelation 4:1-3
“1 After this I looked, and there before me was a door standing open in heaven. And the voice I had first heard speaking to me like a trumpet said, “Come up here, and I will show you what must take place after this.” 2 At once I was in the Spirit, and there before me was a throne in heaven with someone sitting on it. 3 And the one who sat there had the appearance of jasper and ruby. A RAINBOW that shone like an emerald {green=New Covenant=NO MORE JUDGMENT} encircled the throne.”

And that, Church, is why there is a rainbow around God’s throne and the door is open wide for us to freely enter His presence.  He wants to comfort and remind us of the truth about THE COVENANT OF THE  RAINBOW.

You may follow the link below to part 6 and read about the wonderful message from our Father to us in the meanings of the names in Genesis 5!

A Message In The Begets Of Genesis 5: Flood Series Part 6