Skip to content
Matthew 26:36-39
Then Jesus came with them to a place called Gethsemane, and said to the disciples, “Sit here while I go and pray over there.”  And He took with Him Peter and the two sons of Zebedee, and He began to be sorrowful and deeply distressed. Then He said to them, “My soul is exceedingly sorrowful, even to death. Stay here and watch with Me.” He went a little farther and fell on His face, and prayed, saying, “O My Father, if it is possible, let this cup pass from Me; nevertheless, not as I will, but as You will.”
– 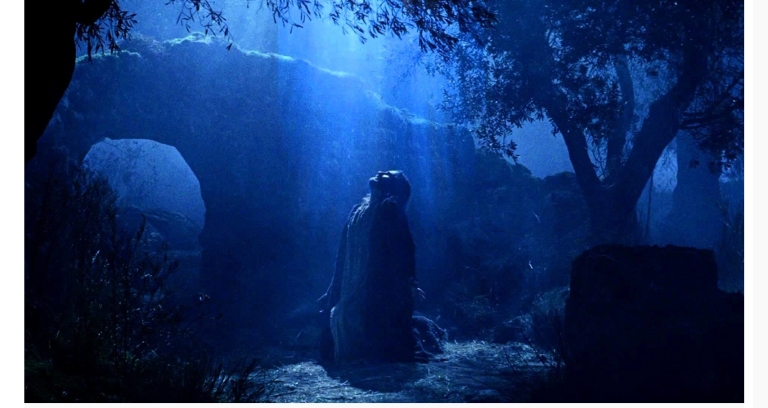 (Jesus praying in the garden.)
–
Jesus’ sufferings began here, in the garden of Gethsemane.  In Hebrew, this name means “Oil press.”  It is no coincidence that it was so named.  The Holy Spirit, our Master Storyteller, is drawing for us some very graphic pictures of Jesus. 😭
–
He went to Gethsemane right after the Last Supper with His disciples in the upper room.  There are two times when it is lawful for one to partake of the Passover:  The evening before or the evening of the feast.  Jesus partook the day before so that He could take His place as the REAL LAMB of God Who would pay for the sins of the whole world.
–
He knew all too well what was coming in the hours ahead and needed strength and comfort from His Father to weather the coming storm. He was so distressed in body and soul that He literally sweat great drops of blood!  😮
–

–
Pronounced, “Gat-Shemané,” it is derived from two Hebrew words: “Gat,” which means “A place for pressing oil (or wine)” and “Shemanim,” which means “oils.”
–

Olive presses have been in use since the Greeks first began pressing olives over 5,000 years ago.  They work by applying pressure to olive paste in order to separate the liquid oil and vegetation water from the solid material. The oil and vegetation water are then separated by standard decantation, a process which separates the mixtures.  It acts to remove a layer of liquid, generally one from which a precipitate has settled.

(Ancient olive press, Israel.)
–
Samson.
In ancient Israel, heavy stone slabs were lowered onto olives that had already been crushed in an olive crusher.  This is the kind of work that Samson did after he was betrayed by Delilah, eyes gouged out, and taken captive by the Philistines.  He was chained to an olive press and used as a workhorse to produce olive oil.
– 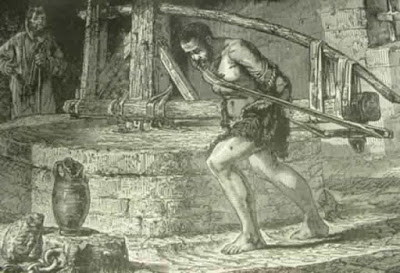 (Samson working at the olive press.)
–
He was Bruised.
The first mention of “Gethsemane” in the Bible is here, in Matthew 26.  It is recorded only 7 times.  Seven in Bible numerics means “Completeness, promise or oath.”  It’s a picture of Jesus Who was crushed for us until every sin and every curse was paid for in full.
–
(For more on the topic of numbers, you may follow the links below:
https://emmausroadministries.international/2016/06/16/numbers-have-meaning/
https://emmausroadministries.international/2016/03/20/bible-numerics/
–
This brings to mind Isaiah 53:5 which says “But He was wounded for our transgressions, He was bruised (crushed) for our iniquities; The chastisement for our peace was upon Him, And by His stripes we are healed.”
–
Just as our Father promised, when Jesus died that day, He completed the work.  His Father swore an oath to deliver us and He did.  Amazing!
–
Think about it:  The One Who is Faithful and True, Who CANNOT LIE, SWORE AN OATH; and delivered up His own beloved Son to die for us all.  For our sakes, Jesus poured out of Himself everything He had, was forsaken by His Father, so that you and could have what He has, never be forsaken, and cry to Him, “Abba! Father!”
–
Why would God, the faithful and true, Who CANNOT lie, swear an oath?  To reassure you and I, the wishy-washy, faithless ones.
–

The Blessing Of Judah.

Way back in Genesis, Jacob called his sons to himself just before he died to speak a blessing over each of them.  All except Joseph and his two sons, Manasseh and Ephraim, are recorded in chapter 49. Joseph’s sons blessings appear in the previous chapter.

Here is the blessing he pronounced over Judah:
“Judah is a lion’s whelp; From the prey, my son, you have gone up. He bows down, he lies down as a lion; And as a lion, who shall rouse him? The scepter shall not depart from Judah, Nor a lawgiver from between his feet, Until Shiloh {Jesus} comes; And to Him shall be the obedience of the people. Binding his donkey to the vine, And his donkey’s colt to the choice vine, HE WASHED HIS GARMENTS IN WINE, AND HIS CLOTHES  IN THE BLOOD OF GRAPES.  His eyes are darker than wine, And his teeth whiter than milk.”  Genesis 49:9-12
–
Blood Of Grapes.
Wine is made from grapes in much the same way as olive oil is pressed from olives.  They must be crushed and trodden underfoot to release their sweet juice.  To the Hebrew mind, the idiom here is “The blood of grapes.”  This is known as a “Hebraism.”  Both processes are depictions of what Jesus went through in redeeming us.
–

(Tabernacle menorah.)
–
Three Steps.
It may interest you to know that the process of pressing olives to extract their oil consisted of three steps.  The oil from the first pressing was used in the temple for the lamp which provided light in the temple.  The oil produced from the second pressing was used for medicine.  The oil produced by the third pressing was for the manufacture of soap for cleansing. Pretty descriptive if you ask me!
–
Pictures Of Jesus.
In the Garden of Gethsemane, the first “Pressing” where He shed great drops of blood, He, Who would become the the Light of the world, allowed Himself to be “Taken captive.
–
At the scourging post, the second “Pressing,” He took all our sicknesses upon Himself for it says,“By His Stripes we are healed.”
–
Finally, on the cross, the third “Pressing,” He paid for all our sins by His perfect sacrifice.  He cleansed the sins of our entire lives by His precious blood.  He cleansed us with His heavenly “soap!”
–
Thank you, Jesus, for loving us!  Thank you for going through the oil press, “Gethsemane.”