Numbers 13:31-33
“But the men who had gone up with him (Caleb) said, “We are not able to go up against the people, for they are stronger than we.” And they gave the children of Israel a bad report of the land which they had spied out, saying, “The land through which we have gone as spies is a land that devours its inhabitants, and all the people whom we saw in it are men of great stature. There we saw the giants (the descendants of Anak came from the giants); and we were like grasshoppers in our own sight, and so we were in their sight.”
– 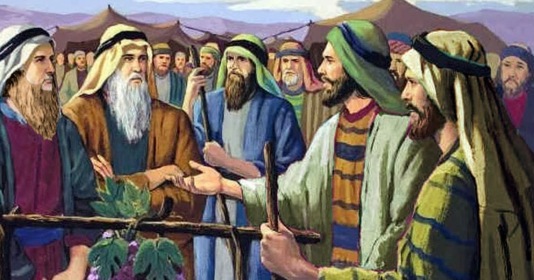 Today, on Tish B’Av, the 9th day of the month of Av, we remember what happened to 6 million innocent people at the hands of Hitler and his evil regime.  All over the world, Jewish people will solemnly commemorate all the evil done to them on this day throughout their history.  I say, “Commemorate,” because this the saddest day of the entire year on their calendar.

The article that follows is an account of the original evil day.  It all started at the border of the Promised Land the first time they approached Kadesh Barnea.  Let’s take a trip back through history look at what happened and why so much evil has occurred on this particular day.

Twelve Spies.
Twelve spies were sent into Canaan, the land God had promised them so long ago.  The spies who were sent to check out the land were all tribal heads and, as such, prominent leaders in Israel.
–
Just as God said, they did indeed find a wonderful land, flowing with milk and honey.  When they came to the valley of Eshcol, there were clusters of grapes so big, two men had to carry them on a pole between them!  The word, “Eschol,” in Hebrew actually means, “Cluster of grapes.”
–
Now, people are basically negative by nature.  Instead of just believing God, what did they do?  Did they focus on His promise that He would give them the land?  Nope.  They were totally freaked out by the giants in the land: The Anakim.

These giants were the after-flood version of the Nephillm, the demon-human hybrids God destroyed in the flood of Noah’s day.  After the world-wide deluge, those same angels who refused to keep their place, began having children by human women again.  These giant hybrids were known as the “Anakim and Refaim.”  YUK!

(If this is a new concept for you, you may follow the link below for the whole story:

Only two of the twelve spies brought back a good report:  Joshua and Caleb.  The other 10 brought back a bad report.  The people who believed the 10 spies were so frightened by the report of the 10 that they almost stoned Joshua and Caleb to death!  They sided with the majority but, as you know, majority doesn’t necessarily mean it’s the right thing.

Numbers 14:10
“And all the congregation said to stone them with stones. Now the glory of the Lord appeared in the tabernacle of meeting before all the children of Israel.”

God Himself had to come down and break up the fight!  He was so angry with the His people, He wanted to wipe them all out.  But Moses interceded for them.  Take a wild guess as to what day on the Hebrew calendar this occurred?   Yep, Tish B’Av.  It is the original evil day.

Tragic “Coincidences” On The 9th Of Av.

Below is a list of some of the events down through Israel’s history that have occurred on this date.  It is a very long, very sad list of tragedies beyond a reasonable doubt that they are not  coincidental.  Don’t get the wrong idea that God is doing this.  See if you can spot a common underlying theme.

#1.  The Israelites accept the false report of the 10 spies that the land of Canaan would be “impossible” to conquer.  They even wept over the false belief that God had set them up for failure.  BIG MISTAKE.  Afterward, they wandered for 40 years.  Why did this happen?

–
#2.  Destruction of the 1st Temple by Nebuchadnezzar, which was built by Solomon.
It was a a beautiful building, but why was it destroyed?  Because Israel kept rebelling against God.  He sent prophet after prophet after prophet to them but, after a short time, they fell away again.  Finally, He sent them into exile in Babylon for 70 years at the hands of Nebuchadnezzar.

Once again, they didn’t listen to and believe God.
–
#3.  655 years later, the 2nd Temple, built by Ezra and Nehemiah, was destroyed by the Romans in 70A.D.  Why did this happen?
Because God had sent Jesus, His Beloved Son to them, and what did they do?  They didn’t believe He was their Messiah.  He was rejected Him and, ultimately, nailed to a cross.  Please understand, they do not bear this guilt alone.  Remember, it was the Romans who physically nailed Jesus there.  Every single one of us are guilty of His death.
–
Even so, God has remained faithful to them.  He was patient with them even though, after Jesus ascended back to His Father, many Jews returned to offering temple sacrifices.  After 40 years, however, (40 being the number of probation), He said, “Enough!”  He no longer resided in the temple and and so was not there to protect it.  That’s why the Romans were able to destroy it.

Why did this happen?  They didn’t believe in Jesus, the Beloved Son sent by the Father.

Are you sensing a pattern here? 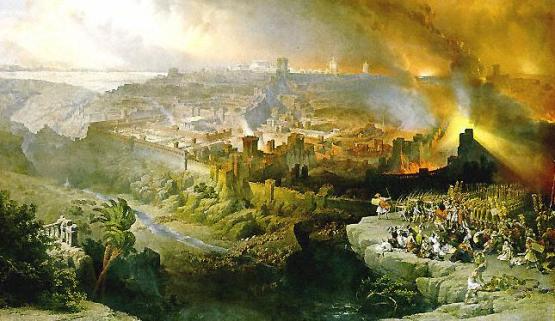 But even though this people, whom God still loves so much, have a long history of not believing Him, He still looks out for them as much as THEY will allow.  It is He Who has preserved them to this day.

Can you name any other nation that has gone through all that they have endured for 2,000 years and come back to be a nation today?  No, you can’t, because there isn’t a single one.  Israel stands alone in that category.  It is God by His grace Who returned them to their own land in 1948.

All those other world leaders and nations that did evil to them ultimately paid a heavy price.  All of them have disappeared from the world scene.

The message is clear:  Don’t mess with the Jewish people…..OR ELSE.
–

More Evil Days.
Down through history, there have been so many instances of bad things happening to the Jewish people that are far too many to be mere coincidence.  The list continues below:

#5.  The first crusade officially commenced on Tish B’Av in 1096.  They destroyed Jewish communities in France and the Rhineland.
#6.  Jews were expelled from England in 1290 on this day.
#7.  They were expelled from France in 1306 on the 9th of Av.
#8.  The Jews were expelled from Spain on this day in 1492.
#9.  Germany, the most evil empire of its day, entered WWl on Tish B’Av 1914.
#10.  When Hitler came on the scene, the beginning of his extermination of the Jewish people began on the 9th of Av.
–
None of these world leaders knew nor did they care anything about the Jewish people or their calendar.   They had no idea what day it was, yet history is clear and the correlation unmistakable.
–
All around the world, Jewish people remember the 6 million Holocaust victims who lost their lives on this day.  So many sad occurrences.  So much sorrow.  So much heartache.  So much destruction.
– 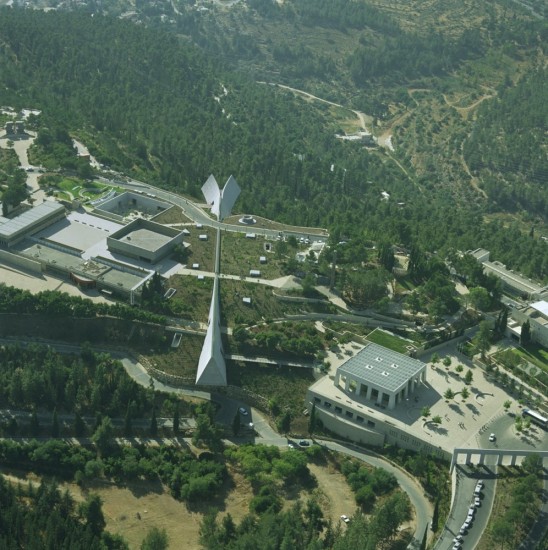 (Aerial view of Yad Vashem, the Holocaust Museum in Israel.)

–
Joy Comes In The Morning.
Through it all, they are the ONLY nation that has endured all the above and survived to be stronger than ever.  That’s a testimony to the grace of our God!

Many Jewish people today have even come to know their Messiah, Jesus, more than ever before in history.  But for for those who have not, I believe He is very soon going to turn their sorrow into JOY!

–
On that great and terrible day when they are almost destroyed, the rest of the nation, who have not met Jesus, will shout for Him:  “Baruch haba b’shem Adonai:  Blessed is He Who comes in the Name of the Lord!”   He will split the clouds and return to save them…..with us in tow…..and rescue His beloved people from certain destruction.  The entire nation will be saved in a single day!
–

4 thoughts on “Tish B’Av: The First Of Many Evil Days.”