Skip to content
Genesis 17:3-6
“3 Then Abram fell on his face, and God talked with him, saying: 4 “As for Me, behold, My covenant is with you, and you shall be a father of many nations. 5 No longer shall your name be called Abram, but your name shall be Abraham; for I have made you a father of many nations. 6 I will make you exceedingly fruitful; and I will make nations of you, and kings shall come from you.”
–

–
In chapter 12 of Genesis, God called Abram to leave the home in which he had lived all his life in Ur of the Chaldees.  So Abram pulled up stakes and, at God’s word, left it all behind. He was 75 years old at the time.
–
Son Of A Servant.
At that time, God promised Abram that He would make of him “a great nation.  But Sarai, his wife, was barren.
11 years after the promise, they still no child; no heir.  She, in fact, despaired of ever having children.  So, she decided to take matters into her own hands.  At her insistence, Abram fathered a son named “Ishamael” by her Egyptian maid, “Hagar.”  Let’s follow the story:
–
Genesis 16:1-5
“Now Sarai, Abram’s wife, had borne him no children. And she had an Egyptian maidservant whose name was Hagar. So Sarai said to Abram, “See now, the LORD has restrained me from bearing children. Please, go in to my maid; perhaps I shall obtain children by her.” And Abram heeded the voice of Sarai.
Then Sarai, Abram’s wife, took Hagar her maid, the Egyptian, and gave her to her husband Abram to be his wife, after Abram had dwelt ten years in the land of Canaan. So he went in to Hagar, and she conceived. And when she saw that she had conceived, her mistress became despised in her eyes. Then Sarai said to Abram, “My wrong be upon you! I gave my maid into your embrace; and when she saw that she had conceived, I became despised in her eyes. The LORD judge between you and me.””
– 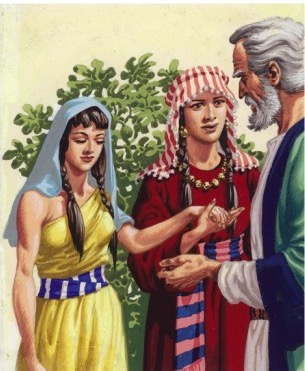 (Sarai gives Hagar to Abram.)
–
Wait, what?!  Hold on a minute.  Wasn’t it Sarai’s idea for her husband to have children by her maid to whom, by the way, he legally married?  Yes. But after conceiving, Hagar despised Sarai.  So Sarai turned around and pointed the finger of blame at Abram for doing what she told him to.
Whoa!  This is better than any Hollywood soap opera. Talk about drama! 😲
–
After that time, there was a period of 13 years when there was nothing but silence from God.  There is no indication that He communicated with Abram in any way. Very telling. 🧐.
You see, 13 in Bible numerics is the number of rebellion. By taking matters into their own hands, instead of waiting on God’s promise, was rebellion.
–
(For more on the topic of numbers and their meanings in the Bible, you may follow the links below:
Part 1:
https://emmausroadministries.international/2020/07/02/numbers-have-meaning/
Part 2:
https://emmausroadministries.international/2020/07/03/bible-numerics/)
–
…..THEN…..when they were too old to have children, God stepped in and pulled off a miracle. He began by changing both of their names.
–
Why Change Their Names?
At the ripe old age of 99, God came to Abram and reminded him of the covenant He made with him some 24 years earlier.  By this time, as I said, he was old and no longer able to father children nor was Sarai able to conceive.
Our God did something that was both amazing and puzzling:  He changed his name from “Abram” to “Abraham,” and Sarai’s name to “Sarah.”  Below are their names in English and Hebrew:
–
Abram (אברם) became Abraham (אברהם );
Sarai (שרי) became Sarah (שרה).
–
Why did God need to change their names?  Was there something wrong with them? No, not exactly. More like something missing.  The answer can found in the Hebrew spelling of their names.  These new spellings also reveal some wonderful things about our AWESOME GOD!
–

–
Secrets In The Hebrew Language.
We first need to look at God’s name, “Yahweh.”
It spelled like this in Hebrew:
[יהוה].
–
Notice that there are two of these letters in His Name:  “[ה] hei”
–
Hebrew reads from right to left and is a form of picture writing like Chinese.  Each letter is a picture of something.  These pictures are very consistent. “Hei [ה]” is a picture of an open window.  That brings to mind the verse in Malachi where God says He will open the “Windows of heaven” and pour out blessings on His people.  The greatest blessing of all is GRACE, and Grace is a person:  JESUS!
–
God, in effect, poured out a double portion of His blessing on Abram and Sarai.  This is picture of the first-born blessing.
–
(For more on that topic, you may follow the link below:
https://emmausroadministries.international/2016/04/24/ephraim-and-the-house-of-judah-part-2-of-9/)
–
He gave one of His [ה] to Abram, and one to Sarai, changing their names to Abra-“H”-am and Sara-“H.”
–
Transformation.
Now, let’s look at how this name change transformed their lives.  Sarai in Hebrew, is spelled “shin-resh-yod,” and looks like this:
[שרי]
–
[ש] Shin looks kind of like a slanted “W”.  When it stands alone, it means “Shaddai: Almighty God.”  [ר] resh means “Head, think, or meditate.”
[שר]  These letters “shin & resh” together spell the word “sar” which means “captain, prince or lord.”  “Sar Shalom,” for example, means “Prince of Peace.  That’s Jesus!  The Russian word for “Czar” is derived from this Hebrew word.
–
[י]  Yod is this tiny little line found at the far left, at the end of her name.  It may be little but it sure means a whole lot.  It is a picture of an open hand and means “power.”  Unlike languages here in the West, Hebrew does not use numbers like we do.  They use the letters of their alphabet.  “Yod” is the number “10.”  It can also refer to the Ten Commandments as well as the tithe.
–
“Sarai” literally means “My lord.”
–
Can you imagine Abram going around calling his wife “My lord, my lord?”  She is the one who told him to go into her maid, Hagar and have a son by her.  Remember what his response was to her?  “He answered her nothing!”  You know what we call men like Abram today?  Hen-pecked. 😳
–
Sarai was a heavy-handed lady who was used to getting her own way.  But she relied on her own efforts to get it.  Her focus was on HERSELF, not on God.  Well, doing things her way didn’t turn out very well. She became so jealous of her maid that she turned her out and sent her away to die in the desert.

Yeah but before you feel too bad about Hagar and Ishmael, there’s something you may not realize.  Compare this Old Testament account with the one in the New Testament and it becomes very clear.  Ishmael’s “ridiculing” of Isaac was envy with a murderous intent.  He was lawfully guilty of the death penalty. 😲

(Abraham casts out the bondwoman, Hagar.)

Even though what Ishmael did was evil, God heard his mother’s cry of distress. He intervened and turned Hagar’s situation around.  He told her to go back and to “Submit to her mistress.”  Ishmael literally means, “God has heard.”

According to 1 Corinthians 10, the Holy Spirit is painting pictures for us again.  Hagar is a type of the law as Sarah depicts grace.  Hagar: Law, was told to submitting to Sarah: Grace.  It’s a picture of the law being subservient to grace, the topic of the entire chapter of Galatians 4.  By that definition, going back to the law makes you a slave once again.  You are no longer free.
–
But in the fullness of time, God, true to His word, sent the child of promise.  Isaac came, notwithstanding Abram and Sarai’s “help.”  By replacing the “yod,” i.e. removing the law, from her life, God gave her His “Hei-grace!”  The result?  Whereas Sarai means “my Lord,” Sarah means “Princess.”  No longer is she the same strong-willed, heavy-handed, overbearing woman.  Now she is full of God’s grace.
–

–
That’s how miracles happen: By GRACE, not law.  God’s grace caused physical changes in her barren, post-menopausal body which made it possible for her to conceive Isaac. He renewed her youth, like the eagle’s.  At her advanced age, she was able to carry him to term, give birth, and breast feed him.  Nine months after her name was changed the child of promise was born.
–
It’s abundantly clear that these changes were physical, not just spiritual, though that is also evident.  These changes were quite obvious to the heathen king, Abimelek, who wanted her for his harem!
–
Folks, she was in her 90’s!  Bear in mind, this was not the kind of guy who had any kind of spiritual discernment.  He would not even notice or even care at all about “Spiritual changes.”  He would, however, notice a physically beautiful woman.  He went by his eyeballs.  He “Saw” that she was very beautiful.  How many 90-year-old women get an offer like that?
–
For more on that part of their story and what happened to Abimelek, you may follow the link below:
https://emmausroadministries.international/2016/07/27/the-difference-between-servants-and-sons/
–

–
Abram To Abraham.
What about Abram?  His name change in Hebrew is also very telling!
–
Below are his given name and his new name.  The Hebrew letters reveal something so amazing that you’d never get from any translation or definition.
–
Abram  [אברם]
Abraham  [אברהם]

Here comes the AMAZING part!  Abram from right to left is spelled:

You see, while Abraham was still “Abram,” he remained God’s friend and all but what he needed was a bonafide miracle to have a son.  Having a son come from his own loins was the only way he could come into to the fullness of all God’s blessings.  But he was old, Sarai was barren and WAY past her “expiration” date.  Talk about a double whammie!

Well you know our God LOVES  so-called “impossible” situations, doesn’t He, Church?!   The more “impossible” the better!  How did God perform Abram’s miracle?  BY GRACE!!!  He literally took one of His “héi,” and inserted it into his name, changing it to Abra”h”am. Again, nine months later, Isaac was born.

Grace, quite literally, regenerated them both….PHYSICALLY.
–
The letter pictures also tell us even of the Divine order of things:
“The Father (אב) sent the Son; (בר) grace (ה) came by Jesus Who gave us the Holy Spirit (ם)
–

–
That’s our God!  He is full of grace.  But He doesn’t want to keep it to Himself.  He gives us a double portion:  The first-born blessing.  That’s the beautiful picture He painted when he changed the names of Abraham and Sarah!
You may follow the link below to proceed to part 2:
–
https://emmausroadministries.international/2019/12/14/isaac-and-rebecca-patriarch-series-part-2-2/