Skip to content
Luke 15:1-3
1 “Then all the tax collectors and the sinners drew near to Him to hear Him. 2 And the Pharisees and scribes complained, saying, “This Man receives sinners and eats with them.” 3 So He spoke this parable to them, saying…….”
– 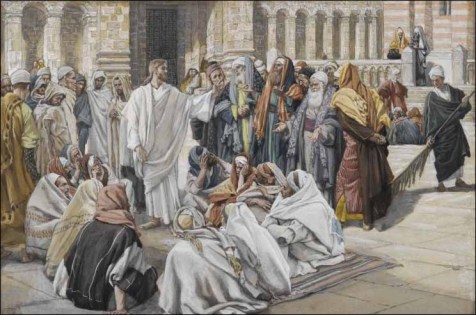 (Jesus teaches in parables)
–
These are three of the most wonderful parables in the whole Bible. They are three stories of lost items:  1) The lost sheep; 2) The lost coin; and 3) The lost son, better known as The Prodigal Son.  All three have one thing in common: THE JOY OF THE FINDER…..JESUS!
–
From Plain To Parables.
At the end of the previous chapter, (Luke 14) Jesus had been conversing with the scribes and Pharisees.  Up to this point in time, He had spoken to them plainly and openly, revealing Himself in His three-fold glory.  He showed them that He was the greatest of all Prophets, the Highest of all Priests, and the King of all kings.  Sadly, these self-righteous, hard-hearted people didn’t believe Him and He was completely rejected. 😓
–
You can see this change to parables most clearly in chapters 12 and 13 of Matthew. In chapter 12, He is speaking plainly. But in the very next chapter and ever after, He began to teach in parables. How odd! Why did He switch to parables that are meant to hide truths, not reveal them? He had a couple of VERY good reasons.
–
You see, their ultimate rejection of Him would mean they would become guilty of His blood after His death on the cross. To lessen the judgement under which they would find themselves, Jesus veiled His teachings in parables. There’s actually a bit more to it than that so, for those who are interested, the topic is covered in more depth in the article below:
https://emmausroadministries.international/2016/05/07/a-fundamental-change-in-jesus-ministry-part-5-of-16-rightly-dividing-the-word-of-god/

Jesus begins to recount the three parables below. Look who came near and were listening in:  All the tax collectors and the sinners.  Through these wonderful stories, He so beautifully illustrated “True repentance.” 😍
–
The Lost Sheep.
The first parable was about a very unusual shepherd who had a flock of 100 sheep.  But when He comes to check in on them, He finds that one is missing. He does a very strange thing: He left the other 99 and went to search for the lost one. 😮
–
This is not your average keeper of sheep!  Do you know anyone who would leave the majority of his flock to go and look for one stray?  Most shepherds would just forget about the lost one, cut his losses, and continue with the remaining sheep.
Not this Shepherd.  No!  He left the 99 to go out and seek for that one. That’s our Jesus!
–
Then He turned and said to the Pharisees “There will be more rejoicing in heaven over one sinner who repents than 99 “just persons who need no repentance.” 🤔
–

(The Lost Sheep)
–
Really? 99 “just persons” who need NO repentance?  AS IF!  I’m not buyin’ it.  Church, has there EVER, at ANY time, been even ONE just person anywhere, in the history of the entire world, that NEVER needed repentance?  I DON’T THINK SO. 🤨
So why did Jesus say that? Remember to whom He was speaking: The Pharisees.  It’s tongue-in-cheek…..and they all knew it.  They knew His story was directed at them. Bud did they realize the error of their ways and repent? Nope. They hated Him even more. 😓
–
Hypocrites.
There isn’t, never has been, and never will be even ONE so-called, “Just person,” who needs no repentance,” let alone 99.  These self-righteous, self-assured hypocrites were the ones who needed to repent; to “Metanóia: Change their minds,” in regard to how they thought about God. They were just as needy as the sinners who were listening in.  The difference is, the sinners knew they were lost; the Pharisees did not. They knew that Jesus was talking about them and they were seething with anger underneath their religious façade.
–
Afterward, they sought even more zealously for ways to discredit or, better yet, destroy Him. 😡 Not so the sinners and tax collectors.  They rejoiced at His words and loved Him all the more!  They could see His great love for them. 💖
–
How Did The Sheep Repent?
So tell me, Church: How did the sheep “REPENT?” Did he say, “Father in heaven, I have sinned against heaven and against you.  I’m nothing but a rotten sinner.  Please forgive me, I beg you?” 😂 Uh, no.  Sheep can’t talk.  All they can say is “Baa, baa, baa…..Yet, Jesus calls this “REPENTANCE.” 🤔
–
How is it repentance?  Well for one thing, the sheep could have run away from the Shepherd, but he didn’t.  He allowed himself to be picked up.  He allowed himself to be placed on Jesus’ shoulders.  He consented to be carried.  There were no words, obviously, since sheep can’t talk.  But in consenting to rest on the strong shoulders of The Good Shepherd, there was a “Change of mind:  Repentance.”
–
The Real Hero.
You see , the hero of the story isn’t the sheep, is it?  IT’S THE SHEPHERD!  He’s the One Who searched for the sheep, Who found the sheep, Who picked up the sheep, Who carried home the lost sheep and threw a big party, saying, “Rejoice with me, for I have found my sheep which was lost!”  Five things He did:  That’s the number of GRACE!  What a Shepherd!  What a Savior! 🙌🏻💖
–
The Lost Coin.
Next, Jesus told a story about a lost coin.  Why a coin?  Because on it’s face, you see an engraved image.  You and I, who are made in the “image”of God, had lost that image when Adam fell. Jesus came and restored it to us. 💖
–

9″And when she has found it, she calls her friends and neighbors together, saying, ‘Rejoice with me, for I have found the piece which I lost!’

(The Lost Coin)
–
Jesus again said there is “joy in the presence of the angels of God over one sinner who “REPENTS.”  The obvious question is, of course, “How did the coin “repent?”  Hmmm…..🤔 It’s an inanimate object yet it “Repented.” And Who is doing all that rejoicing “in the presence of the angels?”  IT’S JESUS!  No one is happier than Him over a sinner who has come to Him for mercy. 😍
It’s clear that, without saying a word, any lost “Coin” can repent and be saved!
–
Here’s another story of some amazing non-verbal repentance that happened at the home of the Roman Centurion.  You may read all about it by following the link below:
https://emmausroadministries.international/2016/06/08/repentance-to-life/
–
The Prodigal Son.
Last, and probably the most famous parable of all, is “The Prodigal Son.”  This brash, rebellious, disrespectful son demanded all of his inheritance from his father.  Then he turned around and blew it on “Riotous living.”  Predictably, when the money ran out, so did all his fair weather “Friends.”
–
Did he go running back home to his father’s house?  Nope.  He dug his pit a little deeper and went somewhere else to work at the most degrading, menial job on the planet: Feeding pigs. 🤦‍♀️ He got so desperate and destitute, in fact, that he ended up eating what they did!  That’s about as low as it can get for a Jewish boy. 😓
–
The Prodigal’s “Repentance?”
Much is often made of the phrase where it says “He came to himself,” as if this act of his was somehow repentance.  Well it is…..and yet it isn’t.  Let’s look a little closer at this, “Repentance,” of his.
–

17 “But when he came to himself, he said, ‘How many of my father’s hired servants
have bread enough and to spare, and I perish with hunger!”
–
See?  He was starving!  He wasn’t thinking about his father or how he must have wronged him.  He was listening to his growling stomach. 😳
–
“18 I will arise and go to my father, and will say to him, “Father, I have sinned against heaven and before you, 19 and I am no longer worthy to be called your son….”
–
He put together a noble-sounding, rehearsed speech, hoping to get back into his father’s good graces.  Hmmm…So far, so good. But then he adds the next line:
“MAKE ME LIKE ONE OF YOUR HIRED SERVANTS.”’ 🤨
–

–
…Uh, Um…..not so good. Now he wants to EARN his way back into the Father’s favor.  But what is his motivation? “How many of my father’s hired servants have BREAD ENOUGH AND TO SPARE, and I perish with HUNGER.”
–
There is not a hint of remorse for what he did.  He went back home because he was starving.  He remembered the goodness and the more-than-enough bread back of his father’s house.  Look at the Father’s response!
–
20″ “And he arose and came to his father. But when he was still a great way off,…….
1. The Father “saw” him
2. The Father “had compassion,”
3. The Father “ran”
4. The Father “fell on his neck.”
5. The Father “kissed him.”

The Father did 5 things even BEFORE the boy had a chance to blurt out a single word of his rehearsed speech!  5 is the number of Grace.  The Father showed him His Grace!  Then, he began his little speech: 21″ And the son said to him,‘Father, I have sinned against heaven and in your sight, and am no longer worthy to be called your son.’
–
That’s all he got out. Notice what’s missing?  Yep. He never said the part about “Make me like one of your hired servants.”  How could he say he wanted to earn His father’s love in the presence of his superabounding Grace?  He couldn’t.  It’s almost seems as if the Father didn’t care what he said.
–
The Father’s response to the son before or after the speech. He was accepted LONG BEFORE he said a single word!  And the father, the “Finder,” was overjoyed! 💖
–
“24 for this my son was dead and is alive again; he was lost and is found.’
And they began to be merry.”
–
The Elder Brother.
Conversely, the older brother was angry, bitter, and jealous.  He wasn’t at all happy to see that his long-lost brother back home, safe again.  Who does he depict?  The Pharisees.  They were full of anger, bitterness, and jealousy with a murderous intent. 😲  Conversely, the sinners are portrayed by younger brother.
–
Just like the Pharisees, the older son didn’t realize that he, too, needed to metanóia: To change his mind; to “repent.”  The elder brother had no real love toward his father.  There is no sense of closeness or warmth.  He only wanted to party with his friends.  No thought of inviting his father.  His relationship with him was obviously cold and distant, almost angry.
–

(The Good Shepherd says, “Come.”)
–
Jesus Gets All The Credit.
The point is, you and I can’t really take any credit for turning to God or for turning back to Him.  He loved us first and drew us to Him with that same superabounding love.  It irresistibly draws all of us.  How can we do anything less than respond by running back to Him? 😍
–
Jesus is the real Hero. 🙌🏻
Jesus is the One Who deserves ALL THE PRAISE! 🙌🏻
Jesus is the One Who paid the price so we could come home! 🙌🏻
–
Confession of faith does come into play, of course.  But the truth be told, it’s really nothing more than a response to the great love He has already shown us. We don’t deserve credit for any action we have taken.  We simply “Changed our minds” with regard to the way we thought about God.  Now, we understand that He SO LOVED us and He’s not out to get us!
–
See those words, “Minds, thought, understanding?”  It’s all internal, in your thoughts and in your heart. They are non-verbal responses.  That’s how a change of mind often happens:  Quietly, without a spoken word. 🤫
–
Now, because of His great love toward us, you and I are no longer “Lost Items,” like those in the three parables of Luke 15.  You and I have experienced the Joy of the Finder! 💖

2 thoughts on “The Joy Of The Finder!”