Skip to content
Exodus 29:26-27 NKJV
“26 Then you shall take the breast of the ram of Aaron’s consecration and WAVE it as a wave offering before the Lord ; and it shall be your portion.
27 And from the ram of the consecration you shall consecrate the breast of the wave offering which is WAVED, and the thigh of the HEAVE offering which is raised, of that which is for Aaron and of that which is for his sons.”
– 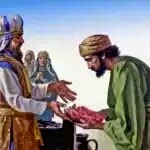 –
How many times have you read through these Old Testament passages and wondered what they meant? This one about the wave and heave offerings kinda leaves you scratchin’ your head! 🧐 What all that waving and heaving about?  Well, wonder no more!  Once again, The Holy Spirit is painting beautiful pictures of Jesus for us again! 💖
–
Treated Like Royalty.
The Wave and Heave offerings were part of the Peace Offering, one of the five offerings of Leviticus.  When the people brought their gift to the priests, the choicest parts were the priest’s portion, particularly the breast and the right thigh. It was theirs to eat as given specifically to them by the LORD.  They were only required to wave the breast and heave the thigh portion before Him, then prepare it to be consumed by themselves and the other priests.
–
(For more on the Peace Offering, you may follow the link below:
https://emmausroadministries.international/2017/01/21/the-five-offerings-of-leviticus-part-7-of-10-the-peace-offering/)
–
You see, the Levites were the priestly tribe. God considered them like royalty.  In those days, eating meat was a real luxury.  The average Israelite primarily ate barley, humus, rice, and things like that.  The breast and the right thigh portions were not just meat but the choicest cuts of meat! 😮 They were given the priests because those parts were of special significance to God.
–
As you can see, It was a big deal to be a priest. You can see why it was VERY important to keep track of one’s lineage to prove it. That is why, when Israel returned from Babylon, some of them who lost their genealogy, had to seek the discernment of the Urim and Thummim to prove they were priests.
–
(For more on that story, you may follow the link below:
https://emmausroadministries.international/2016/05/15/the-urim-או%D6%BCר%D6%B4ים֙-and-thummim-תֻ%D6%BCמ%D6%B4%D6%BC֔ים-part-6-high-priests-garment-series/)
–
The Best Of Everything.
Levites also lived in the best places.  Most of these cities of refuge were on mountain tops.  In fact, 5 of the 6 cities were on mountains and populated by the priestly tribe.  Anyone who committed manslaughter and was admitted into the city of refuge got royal treatment, just like the priests. 😁💖
–
(For more on the cities of Refuge, you may follow the link below:
https://emmausroadministries.international/2016/03/06/the-cities-of-refuge/)
–
The one who took refuge with the Levites ate what the Levites ate and got to wear what they wore:  Linen garments called “Kettoneth,” which was a long-sleeved, ankle-length garment.  Long sleeves meant you didn’t have to work in that culture and linen was such an expensive material back then only royalty and the very wealthy could afford it. 😮
–
For more on this topic, follow the link below:
https://emmausroadministries.wordpress.com/2016/08/15/the-coat-of-many-colors//
–
Types And Shadows.
What does all this mean? Let’s look through the lens of grace and find the hidden picture the Holy Spirit is painting for us.
Beside being the choicest meat, why the breast and thigh?  Breast speaks of love;  thigh typifies strength.  These portions of the sacrifice belonged to both Aaron AND his sons.  Aaron was the high priest of ancient Israel.  He is representative of our GREAT High priest, Jesus!   And who are Daddy’s priests in the world today?  YOU AND I, Church! 😲😁
–
Aaron, as you know, was called “High” priest.  Nowhere in the Old Testament do you find anyone being called “Great High Priest.”  Only Jesus is accorded that honor. 🙌🏻. As Aaron’s sons were priests under him, they typify all of us as priests–SONS AND DAUGHTERS–under Jesus. 💖 They were of the Levitical order but, like Jesus, you and I are priests after the order of Melchizedek. Ours is an eternal priesthood!
–
So, the breast {love} and thigh {strength} meat were the priestly portions.  As God’s priests today, these offerings demonstrate to us that feeding on Jesus’ love FOR us and on His strength assures us of His great love and gives us strength. 💖🙌🏻
–
Picture This.
Tell me:  What motion do you make when you wave? 🤔 Side to side, right?  What motion do you make when you “Heave”  something, as if to toss it up in the air?  It’s an up and down motion. 🤔  Put both of those motions together and what are you drawing in the air?  A CROSS!  It’s a picture of Jesus on the cross! 😮😁
–

–
Our priestly portion, Church, from which we derive strength and feel His love, is feeding on Jesus and focusing on His sacrifice on the cross!  He is our Wave and Heave offering!  AMEN! 🙌🏻💖