Mark 11:12-14 12″Now the next day, when they had come out from Bethany, He {Jesus} was hungry. 13 And seeing from afar a fig tree HAVING LEAVES, He went to see if perhaps He would find something on it. When He came to it, He found nothing but leaves, for IT WAS NOT THE SEASON FOR FIGS. 14 In response Jesus said to it, “Let no one eat fruit from you ever again.” And His disciples heard it.” 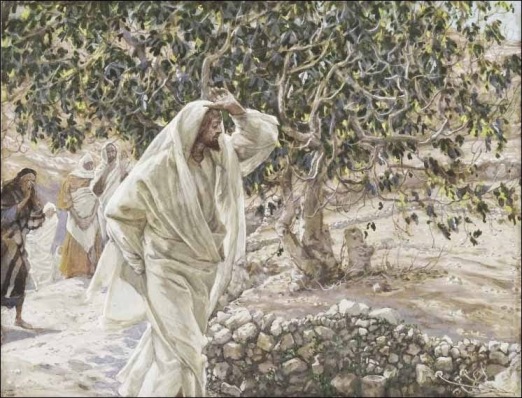 Mark 11:20-21
“Now in the morning, as they passed by, they saw the fig tree dried up from the roots. And Peter, remembering, said to Him, “Rabbi, look! The fig tree which You cursed has withered away.”
–

For years, I wondered why in the world Jesus cursed this poor tree that had no fruit when the passage clearly says it was not the season for fruits.  No doubt you, like me, have heard a message or two and some speculation in an attempt to explain it.

Why did Jesus would do such a thing knowing IT WAS NOT THE SEASON FOR FIGS?  As always, The Holy Spirit has more than just a story about a tree on His mind. In fact, He has a very important message and lesson for us to learn. 🧐 Let’s see what’s on His mind.

God told us to study to show ourselves approved so today we’re going to learn about fig trees.

You may have heard that the fig tree is a symbol of the curse. Scripture, however, does not actually support that presumption.  Figs, vines, and pomegranates are the holy trio of fruits in the temple and in worship in the Old Testament. They are blessings.  The fig is actually a wonderful fruit and contains more seeds within each individual fruit than any other.  Thus, it’s a symbol of fruitfulness as well as an excellent source of nutrition.

But it was never the fruit that was a problem. It was the leaf and the tree. 🤔 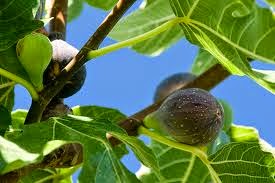 The first time any subject is mentioned in the Bible holds a key to understanding it’s significance in the rest of Holy writ. This is known as the law of first mention.

The first time figs are mentioned in the Bible is in the garden of Eden after Adam and Eve fell. Their eyes were opened, they knew they were naked, and they sewed fig leaves together.  Guess you could say the fig leaf was the very first branded clothing line! 😂. Contrary to popular opinion, it probably was a fig they ate, not an apple.   You’ll see why in a moment.

–
After eating from the forbidden tree, their eyes were opened and they knew they had sinned against God. Fig leaves were their attempt to cover their shame.
–
Notice what God Himself did:  He made them Coats of skin.  The word in Hebrew is, “Kettoneth.”  Contrary to artist’s depictions, this was a ong-sleeved, neck-to ankle covering.
–
(For more on that topic, you may follow the link below:

Importance Of The Blood.

Fig leaves are a picture of man trying to save himself by own efforts.  In other words, self-righteousness.  But the Bible clearly says, “Without the shedding of blood, there is no remission of sins.” (see Hebrews 9:22)

That was Cain’s mistake.  Unlike his brother Abel, he brought produce to God.  But Abel did the right thing and brought a blood sacrifice.  Cain, in so doing was ,in effect, saying he did not acknowledge he was a sinner…..that the works of his hands, i.e. self-righteousness, were a sufficient offering.  He was saying that he didn’t need a blood sacrifice. 🤨
Well, that wasn’t going to cut it. That is why God rejected his offering. That is why he and his brother fought.  Their disagreement was not over whether or not to worship God.  Cain demonstrated that he also came for that purpose.  It was over how to approach God.
– 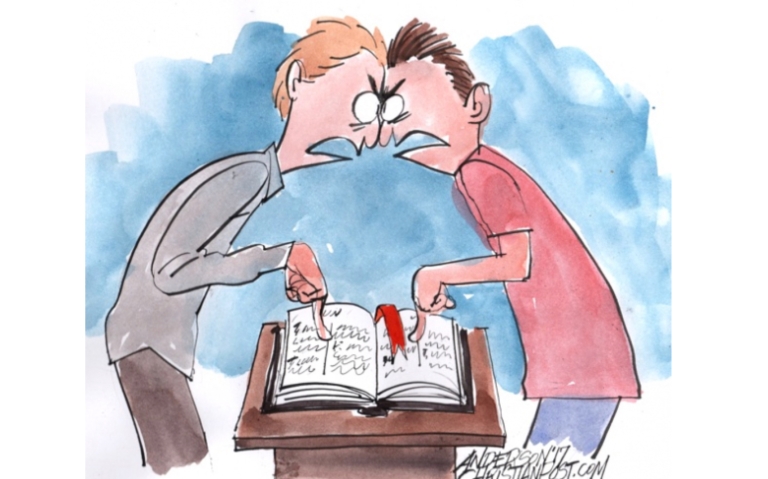 The Debate Still Raging.
The same fight is raging today.  We still have people who think they can merit God’s grace by their self-righteous deeds rather than doing it His way:  By grace through faith in the blood of Jesus. Period, full stop.  And how do the self righteous set view those of grace in our day?   The same way:  JEALOUSY WITH MURDEROUS INTENT.  😲
–
Sadly, some actually do kill fellow Christians over doctrine 😓, though most attack verbally.  They may send poison letters, emails, tweets, posts on Facebook, publicly criticize through media; word darts intended to demonize, demoralize, discredit, and destroy.  It’s as if they believe they’re guardians of ho-o-o-liness or something. 😓
–
Now tell me: Who does that sound like?  “Steal, kill and destroy.”  Yep. That’s the devil right there. 👿
–
First Animal Sacrifice.
Back in the garden, God, was demonstrating the importance of the blood. He obviously killed animals in order to make clothing for Adam and Eve, providing a blood covering for them. Yep, that’s right:  God offered the first blood sacrifice for sins.  Of course, His provision for us is always perfect, unlike our own.
He was doing Cain a favor because his sins would not be covered if he only offered the work of his hands. There is, however, no record of him changing his ways.
– 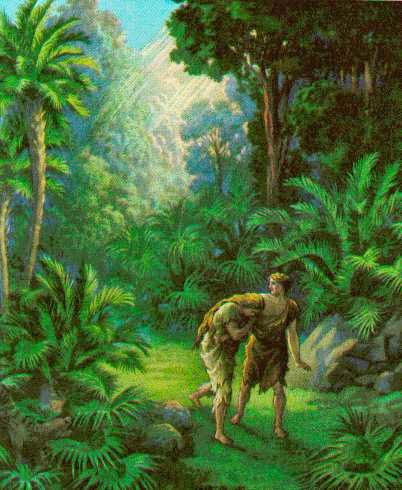 So that’s where it all started:  In the garden…..and man has been “sowing fig leaves together for himself,” as it were, ever since. 😓

–
Characteristics Of Fig Trees.
Getting back to our story, why was Jesus looking for figs on this tree if it was not the season for them? Kinda makes you feel sorry for the tree.  Let’s learn more about the fig tree.
–
Unlike any other, fig trees have a very unusual characteristic. Before the leaves come out, it produces something called “The first ripe figs.”  Biblically speaking, this is a picture of the tithe. {Yes, tithing came long before the law}.  So, when it has leaves on its branches, one should expect to find fruit on it.  But not this tree.  For some strange reason, it had none. 🤔
–

The fig tree in the Bible is always a depiction of Natural Israel.  (See Matthew 24:32)  Jesus had come to His people looking for….NO:  Expecting…to find fruit, i.e. a testimony of God’s goodness, of His blessing, of the fruits that should be there as a result of the blessings from serving the true and living God.

What He found instead was empty religiosity, vain rituals, and outward appearances…..but no substance. You know, leaves but no fruit.  👉🏻“See?!  I’ve got leaves!” 👈🏻 All they had produced was a whole bunch of righteousness by works, not of faith.  It was a bluff, if you will.  In a word, it was Hypocrisy.

By cursing the fig tree, He was not cursing the law but the hypocritical “system” of works without fruit that sprang out of the law. 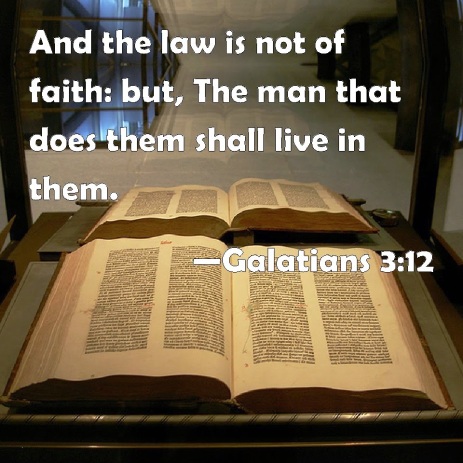 According to Galatians 3 “the law is not of faith.” You are either under law and your faith is suspended……or you are under Grace operating by faith.

You see, faith and performance are mutually exclusive; and, if you do not see performance as a cursed thing, you will be unable to flow in faith.

The unfortunate consequence of all this is that God cannot give you the “land,” i.e. His rest, which He has promised you, and all the blessings that can only be received by grace. You will always be striving and straining to live right all the while missing the mark, feeling like a failure.

That’s what Paul meant when he said that the son of the slave woman, Hagar, cannot be heir with the son of the free woman, Sarah.  Ishmael cannot inherit along with the Isaac, the son of promise; for “if those of the law become heirs, the promise is made of no effect.” Romans 4:14.

Everything God has for us can only be received by faith in Jesus’ finished work. You cannot add to it with your striving and straining, your good works, or your family name.

Blessings come ONLY by grace: UNearned, UNmerited, UNdeserved favor….and that, Church, is why Jesus cursed the fig tree.

You may follow the link below to Part 7 where we’ll talk more about the trouble caused by the fig tree:

14 thoughts on “Why Did Jesus Curse The Fig Tree?: Tree Series Part 6”