Skip to content
Psalm 17:6-9
“6 I have called upon You, for You will hear me, O God;
Incline Your ear to me, and hear my speech.
7 Show Your marvelous lovingkindness by Your right hand,
O You who save those who trust in You
From those who rise up against them.
8 Keep me as the apple of Your eye;
Hide me under the shadow of Your wings,
9 From the wicked who oppress me,
From my deadly enemies who surround me.”
–

–
Without a doubt, Jesus fought THE GREATEST WAR OF ALL TIME. Incredibly, the entire story of what he accomplished on our behalf is written far above our heads.  Our Father BLASTED HIS STORY all over the night sky.
–
Act 1, Scene 3.
As I have said before, the Gospel in the stars is like a three-act play.  There are 12 major constellations, each with three accompanying minor start groupings that expand on the portion of the story introduced by its major sign.  These minor constellations are called, “Decans.”
–

–
Scorpio is one of the 12 major constellations.  It is scene 3 of act 1 of this timeless story.  The two previous major constellations, Virgo and Libra, tell us the first two parts of the story of Act 1.
–
On-going Orchestration.
Amazingly, God orchestrates the moment of the stars as the story unfolds on earth.  This is on going and particularly evident in the star grouping known as “The Southern Cross,” discussed in part 5.
–
As the matchless story of God’s Champion unfolded on earth, the stars echoed those events.  In ancient times, as you read in part 5, the Southern Cross was visible in the Northern Hemisphere as far as the British Isles.  But in our day and age, it can only be seen when one is south of the equator. 🤯
–
The North Star shares a similar narrative.  Did you know that ancient mariners did not look to Polaris to guide them?  It’s true!  There was a completely different star in the constellation, “Draco,” called “Thuban,” which means, “Subtle,” that guided their ships.
Draco depicts the great dragon, satan. Speaks volumes, doesn’t it?  That abruptly changed when Jesus cried, “FINISHED!”  Far more than our salvation was accomplished on the cross that day!  His sacrifice quite literally changed EVERYTHING! 😮
–
We’ll be discussing this in greater detail when we talk about Cancer, the Crab, MUCH FURTHER along in this series in part 36.
–
Signs and Seasons.
Genesis 1:14 says that the stars not only mark the passage of time and the seasons of the year but are set in place to serve as signs; They are portents of future events.  First and foremost, they tell the story of Jesus.  But they also tell of events pertaining to Israel and the Church.

Up to this point, we have been told of the Virgin and child, some facts about this coming One, his dual nature, and the death He would die.  Jesus’ name isn’t mentioned, of course, but the details of His story most certainly are.

In Libra it is shown that man was weighed in the scales of divine justice and found to be wanting.  But God’s Champion, Who would  come as a human, would humble Himself to suffer THE WORST form of death ever devised:  The cross.  He would bear the sins of the whole world and pay…or rather OVERPAY…the sin debt owed by every male and female who ever lived or will live.

Our Jesus did that!  He paid a debt He did not owe for us, who owed a debt we could not pay. We also saw that He was both Offerer and Offering, portrayed by Centaurus and Victíma.

Scorpio introduces us for the first time to the enemy with whom God’s Champion would do battle.  It further explains the conflict introduced by the previous sign.  This major Mazzarotte (Zodiac) sign was called, “Scorpio,” by the Greeks.  Along with it’s Decans, it tell us how the Champion would be surrounded by deadly enemies, all of which He would SOUNDLY defeat!

In this constellation we have a giant scorpion, tail and poisonous stinger poised.  It is attempting to strike the heel of a mighty man approaching it.  The man, “ORPHIUCHUS,” has his foot squarely on the head of the scorpion while simultaneously struggling to restrain a great serpent.  His name actually means, “Serpent-bearer.”

Why a scorpion?  Though not all are not deadly as modern science has discovered, I think we would agree that they are frightening and would consider them a deadly enemy.  Pretty good description of satan if you ask me!

–
Why Did The Enemy Distort The Story?
Our enemy invented astrology to distort the Gospel story.  He wanted to keep man from knowing the truth, and telling it to others.  As you read in part 1, back then there was no written word.  The Gospel was passed down from father to son by recounting the story written in the night sky.  Generation upon generation learned to tell the story, came to know the truth, and to believe in the promised Champion.
– 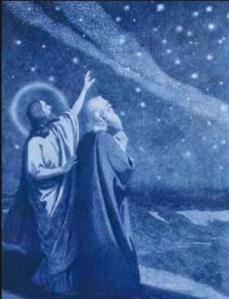 –
Faith Counted As Righteousness.
Just like Abraham, those who lived before the cross could be counted as righteous too by believing the same gospel you and I do!  The difference is, they looked forward to Jesus’ finished work; we look back to it.  That’s how Jesus preached the Gospel to Abraham:  He showed him the story written in the night sky.
–

Before Jesus came, sins could only covered temporarily.  Ours, however, are cleansed for ALL ETERNITY.  They had to apply the blood of bulls and goats to the mercy seat annually; we apply the Perfect Blood of the Perfect Sacrifice ONCE FOREVERMORE!

Today we are blessed to have God’s written word and don’t need to rely on the stars to tell us of His amazing love.  Now do you see how serious astrology is and why our enemy invented it?  That’s why God came down and confused the language of the peoples involved in the Tower of Babel as we discussed in part 2.

–
The story in the stars will serve another purpose after Jesus raptures His Church out of this world.  It will be a witness to natural Israel and to those who are left behind that the New Testament is God’s word, just a surely as the Old.  They will see proof up there in the stars that the entire New Testament, from Matthew to Revelation, is God-breathed.
–
They will even be able to read the New Testament in their own language of Hebrew.  There are, right now in Israel, many born-again Jewish believers.  The New Testament has been translated into Hebrew by two amazing scholors, “Keil and Delitzsch,” so that born again formerly Jewish people can read it for themselves.
– 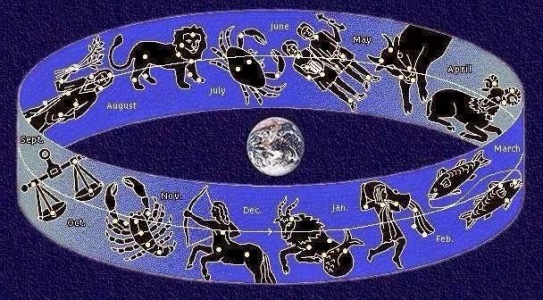 Because this is a circular story, in order to read it you must know where to begin.  Otherwise, it won’t make any sense.  It starts with the virgin, known by her Latin name, “Virgo,” and ends with “Leo,” The Lion of the tribe of Judah.

God, in His love and mercy, arranged to have a monument, the Great Sphinx of Egypt, erected to act as a signpost so man would know where the real story begins and ends, which we covered in part 3.

–
Names Of The Stars.
One of the most amazing aspects of this story is all the ancient names for the stars. Many of them have been lost over time, but enough have been preserved for us to demonstrate that many nations had knowledge of this wonderful story.  Some are in Hebrew but most are in other languages.  They are so in line with the real Gospel, it cannot be mere coincidence.  Man had to have been given Divine revelation.  Let’s look at a few examples.
–
To the Hebrews, this constellation was known as “Akrab,” which means “Scorpion.”  This word also means “the conflict,” or “war.”  David used this very same word in Psalm 17:9 where he blesses God for teaching his hands to “war.”  It is derived from the same root word, which means, “To cleave in conflict or battle.”
–
In Arabic this sign was known as “Al Akrab:  Wounding Him Who cometh.”
It’s Coptic (Egyptian) name, “Isidis,” means “Attack of the enemy.”
–
See what I mean?  Different cultures, different languages, yet all tell the same story!
–

Every single one of the various names of this constellation and it’s stars, even though from various cultures in diverse places, all relate the same story:  That of a great conflict with a deadly enemy where wounds are inflicted.

Though many of the ancient names of the individual stars have been lost, those remaining are enough to let us know that this story wasn’t contrived by some crackpot story teller of old.  THIS IS REAL…..and it didn’t happen in a corner, another reason why “All are without excuse.”
–

(Cor Scorpio: Antares The heart of the Scorpion)

“Antares” is the brightest star in the upper torso of the creature.  It means, “The wounding,” in Arabic. It’s Latin name, “Cor Scorpio,” means “heart of the scorpion.” Amazingly, it is a DEEP RED COLOR!  {See picture above} Isn’t that cool?

Then there’s the tail of the creature or, more precisely, the stinger.  This star is called, “Lesath,” which in Hebrew means “The perverse.”  Apt description!

Reminiscent Of The Garden.

This portion of the story is the embodiment of the passage in Genesis 3 where God says He would put enmity between his (the serpent’s) seed and the Seed of the woman. The heel of the offspring of the woman will be bruised but the serpent will suffer significantly more damage:  HIS HEAD WILL BE CRUSHED…..

…..and that was a promise Jesus kept when the devil was UTTERLY DEFEATED AT THE CROSS.  Jesus fought with the great dragon and defeated him for us in the greatest conflict of all time as told in the story of Scorpio and THE GREAT WAR!

You may follow the link below to continue this series in Part 7 where we talk about a very familiar story in the minor star grouping known as Hercules.  I think you’ll find that that ancients borrowed their story line from somewhere else 😉: