Piscis Australis, or the Southern Fish, is the first decan, or minor constellation, belonging to the major star sign, “Aquarius, the water pourer.”  He poured out of his urn a great stream of water that is completely consumed by the Southern Fish through its mouth.

We saw in Aquarius that water, in biblical typology, is a picture of the word of God.  Fish are a depiction of individual believers, but a GIANT fish?  What could that be?  Why, a picture of the Church, of course!

Though the Denderah of Egypt is the oldest planisphere, another very ancient one is that of Persia.  They pictured this star sign with the head of a woman, echoing the fact that Jesus refers to His Church as His “Bride.”

In Part 16 about the constellation Aquarius, we saw that the Hebrew letter, “Mem [מם]” had two different looking letters that meant the same thing.  One was called, “Mem;” the other was “Final mem.”  They are a “Picture” of the Holy Spirit.

In the same way, the Hebrew letter, “Nun,” has two different characters.  One is used anywhere in words except the end; the other, “Final nun,” is used ONLY at the end of a word.  It is pictured below. 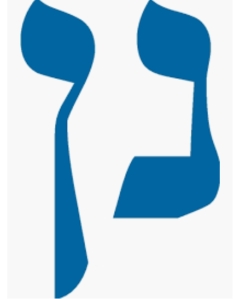 (From right to left, Nun and Final Nun.)

Hebrew is a language of picture writing, like Chinese.  Each letter is a picture of something.  These are very consistent.   “Nun [נן]” is a “Picture” of a FISH.  The Fish is a biblical typology of believers!  A BIG FISH, as you saw above, is a picture of the Church.  Amazing how God weaves all of this in together to make a beautiful story about His love for us!

The only name that has come down to us from ancient times is, “Fom al Haut“ (Fomalhaut), The Mouth of the Fish,” from Arabic, pictured below.

The only name of the stars in this constellation that has been preserved for us is Fomalhaut, which demonstrates that this star sign is all about the mouth of the fish.

As you saw in Aquarius, water is a picture of the word of God.  Water going into the mouth of the fish reminds me of the scripture that says, “The word is near you, EVEN INB YOUR MOUTH,” in Romans 10:8.

Notice that ALL of the water goes into the fish.  None of it escapes, showing us that all of God’s blessings, everything written in His word, is given to His Church.  None of it is wasted.

Last of all we have the Egyptians.  They saw in this sign both the fish and the stream of water.  Their name for it in hieroglyphics is, “Aar:  A stream.”  It carries with it the picture of a flood of blessings flowing to the mystic fish people.

This is consistent with what we know of Church history.  Until its inception, the Church was a mystery.  It began as all Jewish but soon became more of a blessing to the Gentiles.  This was very confusing to the Jewish people who were quite exclusionary in their thinking.  They thought Messiah was only for them.  They had not idea Jesus intended that the whole world would be saved.

Thank you, Jesus, for loving us and saving the whole world!!!