“In that day the Lord with His severe sword, great and strong,
Will punish Leviathan the fleeing serpent,
Leviathan that twisted serpent;
And He will slay the reptile that is in the sea.”

Now we come Cetus, the sea monster, one of the largest constellations in the heavens. He is a depiction of the devil who is in the “Sea,” sea being a typology of the world.

In the picture above you can see that he has one horn on his head and a curved tail that resembles that of Capricorn and Delphinus.  His front paws, like that of a lion, are poised over the river, Eredanus, trying to catch some of the fish people.  He’d certainly catch them if he could. 🤨

That’s a pretty good description of satan, the accuser of the brethren, who goes about  like a roaring lion (hence the lion paws), seeking whom he may devour.  Sounds like what Peter wrote in the verses below:

1 Peter 5:8-9  “Be sober, be vigilant; because your adversary the devil walks about like a roaring lion, seeking whom he may devour.  Resist him, steadfast in the faith, knowing that the same sufferings are experienced by your brotherhood in the world.”

One little fact about lions that you may not know is that lions who sit around all day and roar are nothing but toothless, useless old lions that can no longer hunt.  They roar a lot in order to seem terrifying when, in actuality, they are impotent.  (For more on that topic, you may follow the link below:

The tail like Capricorn and Delphinus speaks to the fact that the devil likes to deceive, to appear as something nice or friendly, like an angel of light.  After all, if we saw evil for what it really is, sin wouldn’t be attractive.

Being one of the largest constellations paints quite a picture too, doesn’t it?  Sometimes in the midst of trials and temptations OR when you look around at this lost and dying world, the evil can seem so much greater than good.  That’s just all part of the devil’s “Roaring.”  He likes to seem so powerful and so frightening that we forget, momentarily, Jesus defeated him; crushed his head!!  He’s hoping we’ll forget to invoke Jesus’ Name and send him packing.

But our Jesus says, “Fear not, little flock,” He has restrained the devil.  That band you see connecting the two fish of Pisces is under the control of Aris the Ram, i.e., Jesus, Who keeps the devil at bay.

Cetus is the only name that has been passed down to us from the ancients.  It has been recognized as either as a whale or a sea monster for more than 5000 years.  Regardless of how he is pictured, however, he is known to be a great enemy of the One Who is coming.

He is also the enemy of Coming One’s Fish people.  We know this because, in the most ancient planispheres, he has one horn sticking out from the middle of his forehead.  That horn pricks the left foreleg of the major star sign, “Taurus, the Bull,” another picture of  Jesus.

The Horn, in biblical typology, symbolizes authority; in his case, one horn means “Not much authority.” It’s only enough to barely graze or bruise the heel of God’s Champion.  So, since he cannot strike at God directly and make any kind of headway, he strikes at the ones God loves most:  US. 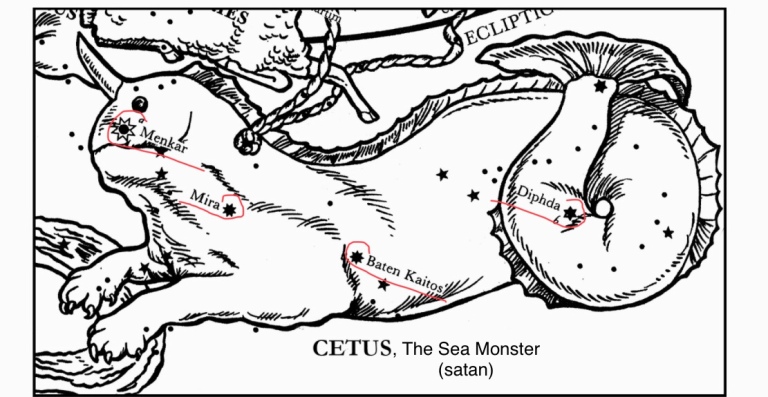 The star names tell us quite a bit more this constellation.  “Menkar,” in the nose of the above picture, is a Hebrew name which means, “The Bound or Chained Enemy.”  It is the brightest star.  Next in order of magnitude, “Diphda,” is also a Hebrew name, meaning, “The Overthrown.”  Another name for Diphda of more modern origin is, “Deneb Kaitos: The Tail of the Whale.”  A more ancient meaning of “Deneb,” however, leads us to conclude that perhaps a more accurate meaning of this name would be, “The  Lord or Judge of Cetus.”

“Baten Kaitos,” located in the creature’s belly, (very curious positioning) is an Arabic name.  Look at its meaning:  “From the Belly of the Whale.”  That’s very telling, isn’t it? Who does that bring to mind?  Yep, Jonah!…..And what, or Who, is the story of Jonah all about?  Our Lord Jesus, Who spent 3 days in the “BELLY of the earth,” (Paradise) when He died!  When He arose, He took captivity captive.  HALLELUJAH!

Is there any doubt that God wrote this story in the night sky, detailing what Jesus did?  I mean, there is such incredible detail, it can be NO ACCIDENT.

(For more on the story of Jonah, you may follow the link below:

Remember what Jesus said in Matthew 12:38-40?  He was talking to some of the scribes and Pharisees and revealed Himself in His three fold glory.  But they rejected Him saying ,

Immediately after this discourse, He began teaching them in parables in order to hide the truth from them.  If you’d like to know why He did that, you may follow the link below:

The next star is, “Mira,” which means “The Rebel,” (Hebrew), perfect description of the devil.  Located in the neck of the beast, it is also a very strange star. Satan is the ultimate rebel, of course, as this star indicates; but this particular star is very unusual.  It is among the most unstable of stars in general in that it varies greatly in brightness.

Called by astronomers, “A variable star,” it is perhaps the MOST VARIABLE and unsteady of all.  Discovered in 1596, it was observed to range in brightness from 2nd magnitude to completely invisible approximately every three hundred and thirty days. It fluctuates from its brightest for about 15 days and then goes through stages of decreasing and increasing brilliance”  It is even completely invisible for a period at least six times every seven years.

How like that old deceiver who either sneaks up on believers like a snake in the grass, or stalks about like a roaring lion, trying to terrify us.

The Egyptians of Denderah, no surprise, picture Cetus quite differently.  They named him, “ Knem:  The Subdued, The Bruised.”  Nearby this figure on the wall of the temple of Esna is a hieroglyphic name, “Kan-nu,” which means “Victory.”  Jesus is obviously being referred to here as the One who subdued and bruised our enemy and was victorious.

They pictured him as the head of a monster being crushed under the foot of a swine, a natural enemy of snakes.  A wolf is joined with the pig and bears a hieroglyphic name which means, “He Comes.”  Wolves are the forerunners of dogs, which love man and are even called, “Man’s best friend.”  There is no better friend than Jesus!

Above the wolf and the swine is a hawk, also a natural snake predator.  It is crowned with a mortar, something used for crushing and bruising, which corresponds to the head of Medusa being held in the hand of our next decan, “Perseus.”  Why Medusa?  What does she do?  She turns people to stone when they look into here eyes.  Rocks (mortars) and stones are depictions of The Law.

Put all these pictures together and the message is clear:  “There is One Who came and is coming again, Who conquered over death and defeated the devil with his own weapon, “Death.”  He crushed his head and subdued him.”

But we know better, don’t we Church?  We don’t need to listen to him or fear him and his attacks.  Jesus Himself protects and defends us from Cetus, the Sea Monster!