“…I will sanctify My great name, which has been profaned among the nations, which you have profaned in their midst; and the nations shall know that I am the Lord,” says the Lord God, “when I am hallowed in you before their eyes.

“For I will take you from among the nations, gather you out of all countries, and bring you into your own land. Then I (Jesus)will sprinkle clean water on you, and you shall be clean; I will cleanse you from all your filthiness and from all your idols. I will give you a new heart and put a new spirit within you; I will take the heart of stone out of your flesh and give you a heart of flesh. I will put My Spirit within you and cause you to walk in My statutes, and you will keep My judgments and do them. Then you shall dwell in the land that I gave to your fathers; you shall be My people, and I will be your God.”

In stark contrast to Andromeda, Cassiopeia is a regal woman. She is in a seated position, not in chains like the preceding decan.  She is enthroned!  Her hands are above her head with her right hand holding the straps of her gown as if dressing, while her left hand is holding aloft a branch, a symbol of victory.  Some ancient planispheres show her holding her own hair with one hand, brushing it with the branch in her other hand.

Let’s to go back a few chapters and retrace our steps in order to put these two ladies into perspective.

A Tale Of Two Fish.

In Pisces, we met two fish going in opposite directions, depicting two different groups of people in covenant with God:  The Jewish people and the Church.  The one heading toward Aquarius, hungry for the word of God poured out from His side, appears to be joining the giant fish drinking in that water.  It has eyes only for Him.

Aquarius, you may recall, is holding the urn from which the water is pouring is on His RIGHT side, just as water and blood poured out of Jesus’ riven RIGHT side, pictured below.

The other fish that is swimming north is somewhat smaller than the other.  It intersects with Andromeda, the woman in chains, who learns of Cepheus, the King, and also touches the decan we are currently studying:  Cassiopeia.

Notice that this enthroned woman is somewhat smaller than Andromdea.  Unlike her, with torn gown and one breast exposed, she is fully clothed, seated on a throne, combing her hair with her victory branch as if preparing herself to meet her King, as previously described.

Cassiopeia will interact with Cetus (the devil) in the next decan, for a time.  Thankfully though, in the nick of time, she is rescued by the sword-wielding Perseus whom we shall meet later on. He is rushing swiftly to her rescue, hence the wings on His feet.

Cepheus, the King, whose left foot is standing on the Pole star, is positioned as the door of the Lesser Sheepfold. This is very telling and a very important topic we’ll be talking about later on in this series.

These two women, Andromeda and Cassiopeia, bring to mind the parable of the ten Virgins, a story often ascribed to the Church. It is actually all about Israel.

(For a more complete discussion of that topic, you may follow the link below:

You see, when the Bridegroom comes for His Church, only about half of the Jewish people will be saved and ready to go up with the rest of the Church in the rapture.  The other half will be left behind during the Tribulation.  However, before Israel is totally destroyed, Jesus (Perseus) will return swiftly to rescue them, with us, His Church, in tow! 💖🙌🏻

Preparing To Meet The King.

Cassiopeia is like a bride adorning herself for her Bridegroom.  The scripture below describes those preparations.

Ephesians 5:25b-27 “Christ also loved the church and gave Himself for her, that He might sanctify and cleanse her with the WASHING of water by the word, that He might present her to Himself a glorious church, not having spot or wrinkle or any such thing, but that she should be holy and without blemish.”

What do you usually wash with?  WATER!

When we, the Church, are taken out of this world, we will sit down at the marriage supper of the Lamb, and so will we ever be with our Lord.  We will be seated in heavenly places next to our Lord Jesus and reign with Him forever.  HALLELUJAH!

Yet, there is hope for Andromeda.  When Jesus returns to earth in His second coming to save Israel from being wiped off the face of the earth, (Perseus, which means “To destroy”), Church in tow, all Israel will be saved on that one day.  The Israelis who went through the Tribulation will recognize at last that Jesus really is their Messiah, as indicated in the passage below from Romans.  Thus, She will become part of the Church and assume the place she was always meant to have.  What a day that will be!

Romans 11:25-27 “For I do not desire, brethren, that you should be ignorant of this mystery, lest you should be wise in your own opinion, that blindness in part has happened to Israel until the fullness of the Gentiles has come in. And so all Israel will be saved, as it is written:
“The Deliverer will come out of Zion,
And He will turn away ungodliness from Jacob;
For this is My covenant with them,
When I take away their sins.” 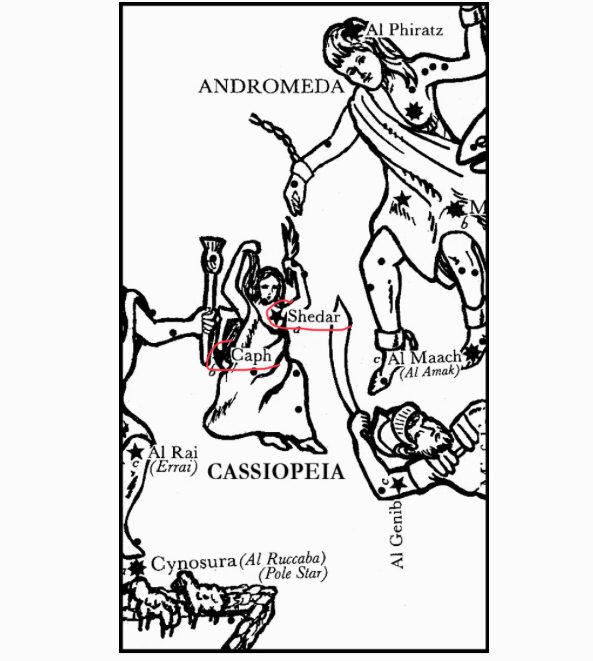 The Jewish people called her, “The Enthroned, the Beautiful.”  The root word, “Yafee,” is the root of the same word in Psalm 45 speaking of the queen’s beauty.  It is the same root word of the city name, “Joppa,” meaning “Fair or beautiful.”

The ancient Arabs and Chaldeans both called her, “Dat Al Cursa:  The Set (Queen) Enthroned.”  The Arabs had another name for her: “Ruchba,” which also means “The Enthroned or The Seated.”

Noel Antoine Pluche wrote one of the most important and well-known treatises on astronomy and cosmology:  “The History of the Sky.”  He called her, “The Boundary of Typhon’s Power: The Delivered From All Evil.”  Pretty descriptive of the Church who will be delivered from this evil world full of evil monsters:  LITERALLY!

Who was Typhon?  A sea monster.  Kinda sounds like the next decan we will discuss:  “Cetus: The Sea Monster.”  He is picture of the devil who is always after the mystic Fish people.

Sea, in biblical typology, is a picture of the nations of the world.  That’s why Israel ran into so much trouble when she was out of her land.  Like a fish out of her native waters, she was subject to the monsters that live in the sea.  Oh boy, was she ever! 😲

As always, we’ll start with the brightest star.  It is located in the area of the right breast, pictured above, and is called in Hebrew, “Shedar: The Freed.” Another Hebrew named star that has come down from antiquity, is in the back of the throne or chair in which Cassiopeia is sitting.  It is “Caph: The Branch.”

Curiously, the four principal stars, third in order of brightness, which form her throne NEVER SET!  They are always visible.  Why?  God is showing us that this throne is FOREVER!

The Planisphere Of Denderah pictures Cassiopeia as a woman and called her, “Set,” which means “Queen.”  So even in this most ancient of star charts, the picture remains the same throughout.  Under her feet were placed hieroglyphics indicating she is a female.  Not only that but there is also an oval and a half circle indicating that she was also a daughter. Al-bumazer, an Arabian astronomer-poet, called her “The Daughter of Splendor.”

Most often when “Virgins” are mentioned, people assume it must mean the Church.  They forget that Israel is also called “Virgin daughter.”  (See Isaiah 37:22)  This “Daughter of Splendor” is definitely referring to the Jewish people, not the Church, which is represented by the fish following after Jesus.

What beautiful pictures of Jesus, Israel, and the Church in this amazing story in the night sky!

You may follow the link below to Part 25 to continue this series.  We’ll meet the largest constellation in the sky:  Cetus, the Sea Monster:

The REAL Story In The Stars Part 26: Cetus, The Sea Monster.