Leviticus 23:22.
“22 ‘When you reap the harvest of your land, you shall not wholly reap the corners of your field when you reap, nor shall you gather any gleaning from your harvest. You shall leave them for the poor and for the stranger: I am the Lord your God.’”
–

–
Ruth had heard a lot from her mother-in-law about the amazing God she worshiped.  The wonderful stores she had heard no doubt drew her to Him and caused her to want to serve Him, too.

But she had obviously heard about some other things.  It’s clear from her statement to Naomi that she knew somewhat about the law concerning gleaning.  She determined to go out and do this menial task in order to provide food for herself and her mother-in-law, whom she loved so dearly.
–
The God Of Haps.
As you saw in Part 5, Ruth went out to find a field in which to glean.  The Bible says, “…she “HAPpened” to come to the part of the field belonging to Boaz, who was of the family of Elimelech.”  The old King James words it this way: “And her HAP was to light on the part of the field belonging to Boaz.”

What’s a “Hap?”  Hap is an old English word meaning, “Chance, good luck, or fortune.”  That’s our God! He is a HAPpening God! When He is in charge of your life, good things begin to HAPpen the way you want them to HAPpen which makes you HAPpy!!  Her steps were undoubtedly guided to the field of Boaz by this wonderful God of HAPS!
–

Menial Task.
All those who regularly reaped in the fields for Boaz were hired servants.  But as a poor person and a foreigner, Ruth was not qualified to do reaping. She followed after the paid reapers to collect whatever they left behind, kind of like a servant to the servants. It was a very menial task.
–

Sometime after her arrival, Boaz, the owner of the field, came to check on his reapers, speaking to his servant who was in charge of them.  You’ll notice that his name is not mentioned.  The “Unnamed Servant,” is a common theme throughout the Bible.  Who is he?  We’re about to find out. 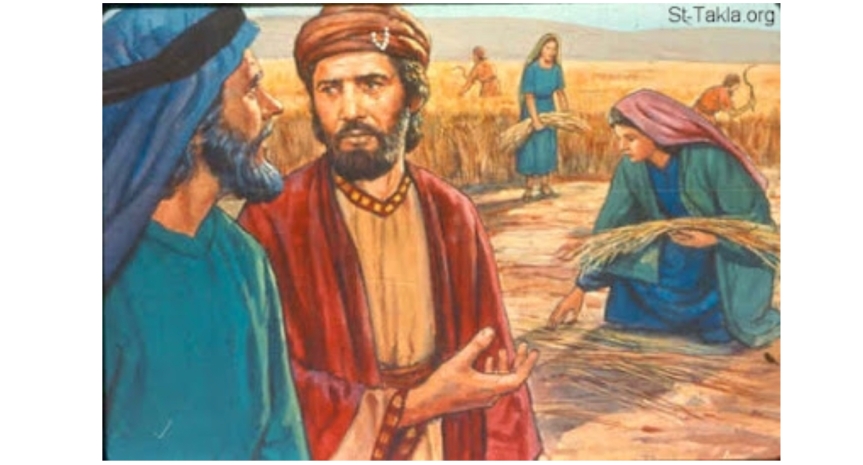 –
The Unnamed Servant.
Ruth 2:4-7
“4 Now behold, Boaz came from Bethlehem, and said to the reapers, “The Lord be with you!” And they answered him, “The Lord bless you!” 5 Then Boaz said to his servant who was in charge of the reapers, “Whose young woman is this?” 6 So the servant who was in charge of the reapers answered and said, “It is the young Moabite woman who came back with Naomi from the country of Moab. 7 And she said, ‘Please let me glean and gather after the reapers among the sheaves.’ So she came and has continued from morning until now, though she rested a little in the house.”
–

As Boaz is a picture of our Lord Jesus, so the Unnamed servant is a picture of the Holy Spirit.  He is there, throughout the scriptures, faithfully carrying out the wishes of His Master.

He is there as the servant of Abraham who went to find a bride for the beloved son, Isaac, a picture of what the Holy Spirit is doing in the world today:  He is going here and there, looking for a Bride for the Son, Jesus.  That’s us, Church!  He is building His Church!

He is there in the story of Joseph, who spoke to his unnamed steward.  Here He represents the Holy Spirit ministering to and watching over natural Israel.  He feeds and cares for them, though they don’t all understand what’s going on, until the moment Jesus, the greater Joseph, appears at the door of his house at the time of the noon meal.

–
Boaz, The Uncommon Landowner.
Boaz came and spoke to the reapers first and then he addressed his servant.  As you read above, he is unnamed.  Now, it’s not unusual for these big bosses to speak to the guy in charge of the reapers, and it’s a bit unusual for him to speak directly to the reapers.  But no one else most definitely doesn’t ever talk to gleaners.

Boaz, however, is no ordinary landowner.  He treated everyone with honor and respect, addressing them first. In fact, the first words out of his mouth were, “The Lord be with you.” He blessed his crew!
–
Then he queried the crew chief about the new girl who was gleaning in his fields. The next thing he did is unlike what any other land owner would do:  He spoke directly to this one doing the menial task of gleaning; this poor, lowly, servant of servants.
– 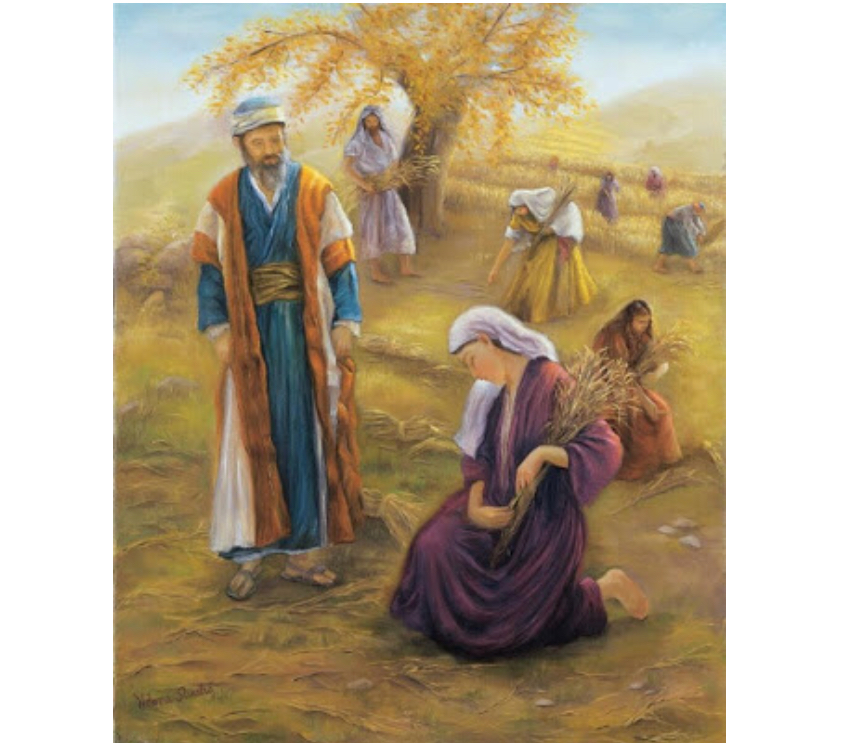 –
Ruth Meets Boaz.
Ruth 2:8-9
“8 Then Boaz said to Ruth, “You will listen, my daughter, will you not? Do not go to glean in another field, nor go from here, but stay close by my young women. 9 Let your eyes be on the field which they reap, and go after them. Have I not commanded the young men not to touch you? And when you are thirsty, go to the vessels and drink from what the young men have drawn.”
–

He first calls her by a familial term:. “Daughter.”  Extraordinary!  Then he tells her to stay close by the reapers and pick up what they leave behind.  He even allowed her to drink from his own vessels when she was thirsty.

Boaz had also commanded the young men not to touch her.  In this, he offered her protection.  Wow!  In the Hebrew, it says he told his young men, “Don’t make her blush.”  Why?

You know how it is, right?  If the boss blesses you and shows you great favor, other workers would probably get jealous and call you an apple polisher or a brown noser.  That would embarrassing, I’m sure.  Boaz did not want that for Ruth.  You see, he had already fallen madly in love with her and wanted her to be treated like someone he loved dearly.

That’s so like our Jesus!  He loved us LONG before we knew Him!

Stay Where God Has Planted You.

Though this young girl was a stranger in a strange land, Boaz showed her kindness and favor, offering her both protection and refreshment. He had heard of her loyalty and faithfulness to her mother-in-law and greatly respected her.  You can se he is really loving her, knowing that if she went into another field, she might be hurt or molested.

That’s why it’s important for you to stay in the Church where God has planted you.  Don’t go into the “field” of another where you might hear teaching that would make you question your salvation or that would rob you of the joy of the Lord.

Undeserved Favor.
Ruth knew she did not deserve anything from Boaz.  After all, she wasn’t even a Jew.  Not to mention, she was also from the family of people that worshipped other gods:  Moab, a nation under God’s curse at that time.  Nonetheless, she received favor.  Look what happened next:
–
Ruth 2:10

“10 So she fell on her face, bowed down to the ground, and said to him, “Why have I found favor in your eyes, that you should take notice of me, since I am a foreigner?”
–
She fell at Boaz’s feet. Great things happen to those who fall at Jesus feet. Grace, like water, always seeks the lowest place.  Favor, protection, and provision flows to the ones who humble themselves.  That’s who God exalts.

Boaz was so completely impressed by this young girl, he went on to explain to her why he took her in and allowed her to glean in his field.
–
Divine Paradox.
Ruth 2:11-13
“11 And Boaz answered and said to her, “It has been fully reported to me, all that you have done for your mother-in-law since the death of your husband, and how you have left your father and your mother and the land of your birth, and have come to a people whom you did not know before. 12 The Lord repay your work, and a full reward be given you by the Lord God of Israel, under whose wings you have come for refuge.”
13 Then she said, “Let me find favor in your sight, my lord; for you have comforted me, and have spoken kindly to your maidservant, though I am not like one of your maidservants.”
–

–
Boaz says to her, “The LORD repay your work, and a full reward be given you by the LORD God of Israel, under whose wings you have come for refuge.”
–
A full reward?…for fleeing for refuge?  She was doing herself a favor seeking protection the God of Israel. That’s like saying to a brood a chicks, “You shall be rewarded for running for protection under your mother hen’s wings!”  But that’s our God!  What a Savior!
–

The Holy Of Holies.

Boaz is referring in his statement here both to Psalm 91 and to the Tabernacle of Moses.  All three of them:  Boaz, Ruth, and David, who wrote the aforementioned Psalm, living after the wilderness wandering, would all have been very familiar with the Tabernacle and the Holy of Holies.

The average Israelite was never allowed to enter this sacred place, nor was the average consecrated priest.  Only one, the High Priest, was allowed entrance once a year on Yom Kippur, the Day Of Atonement, to offer sacrifice for the entire nation for the year ahead.  Even though they never went inside, everyone knew what you would see when you entered.  Pictured below is a view of what you would see on the curtain above your head:

What do you see?  WINGS!!!  “He shall cover you with His feathers and under His wings you shall find Refuge!”  Boaz statement to Ruth brought to mind this very picture.

For more on the Tabernacle, its coverings, their meanings, and what they reveal about Jesus, you may follow the link below:

–
God Gives Us Credit.
How like our Father, giving us credit for what He has done, like the morning Jesus was on the shores of the Sea of Galilee after His resurrection.
–

–
Remember how Peter and his partners had toiled all night and caught nothing? Then Jesus appeared on the shore and told them to throw their nets on the right side of the boat. So many fish ended up in their net, they could not haul it into the boat!
–
Do you recall what Jesus said to them? “Bring now the fish YOU HAVE CAUGHT.”
You have caught? Wait a second: Who actually “caught” the fish? It was Jesus! They had worked all night long with nothing to show for it. Jesus caught those fish and gave them credit for doing it. Wow!

–
Please follow the link below to part 7 where we’ll be talking about the Law of the Kinsman Redeemer:

One thought on “The Story Of Ruth Part 6 of 11: The Law Concerning Gleaning”