Psalm 49:3–4
“My mouth shall speak wisdom, And the meditation of my heart shall give understanding. I will incline my ear to a proverb; I will disclose my dark saying on the harp.” 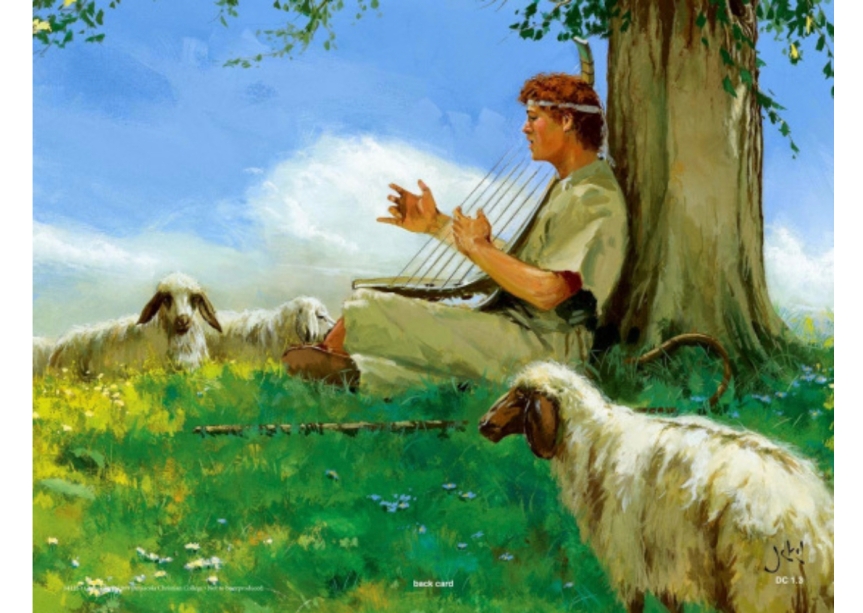 If you’re wondering, “What in the world does this verse have to do with the Sea of Galilee,” well wonder no more! 😁  You see, everything in the New Testament is hidden somewhere in the Old, just as the Old is revealed in the New.  Not only is the Sea of Galilee shaped like a harp but its name in Hebrew actually means, “Harp!” 😮
–
Lessons From The Land.
The land of Israel is God’s favorite place on earth.  Amazingly, the topography, the agriculture, the wind, the people, and even their customs teach us wonderful things about Jesus and about spiritual truths.
–
The two principle bodies of water in Israel are the Sea of Galilee and the Dead Sea.  Both have much to teach us.
–
David’s Harp.
When you read the opening verse, the picture that comes to mind is most likely a musical instrument.  King David, who wrote most of the Palms, played a harp that had 22 strings.
It is no coincidence that there are 22 letters in the Hebrew alphabet.  He could actually play the music of the Psalms.  But he didn’t compose the music.  There is something else about the Hebrew language you need to know.
– 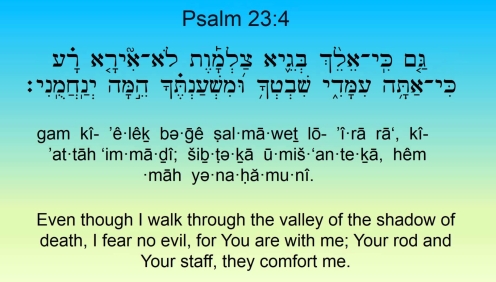 Hebrew is a language of picture writing like Chinese.  Unlike here in the West, Hebrew does not use the number system we do.  They use the letters of their alphabet.  Corresponding to each letter is also a color as well as, believe it or not, a designated musical note!  David could literally play the music of the Psalms on his harp of 22 strings!  Isn’t that cool?

Take a moment sometime and Google the subject, “Music of the Scriptures,” or “Music from God.”  There are some really cool websites you can check out.  Below is a link to follow if you’d like to hear the music of the scriptures.  There are a couple of sample tracks for you to hear:

No doubt there are many mysteries, dark or “Hidden sayings,” in the Psalms.  But this verse is also pointing to events in the life of Jesus while He walked this earth.
–
The Psalms are, first and foremost, prophetic of our Lord Jesus.  But they also contain secrets about events of the last days; in other words, of our times.  Anyone  interested in the prophetic function of the Psalms may follow the link below.  I guarantee it will blow your mind as it did mine!
–
https://emmausroadministries.international/2020/04/18/the-19th-book/
– 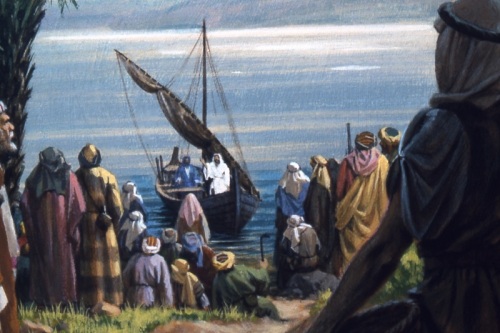 Jesus spoke to the Jewish people in parables, which you might call “Dark sayings.” Parables, the Bible says, were meant to hide the truth, not reveal it.  He didn’t begin His ministry teaching this way.  He spoke plainly at first.  But from Matthew 13 onward, He suddenly shifted gears and began to hide the truth from the people.  Why?

This is another subject in and of itself.  You may follow the link below if you’re interested in the whole story:

https://emmausroadministries.international/2016/05/07/a-fundamental-change-in-jesus-ministry-part-5-of-16-rightly-dividing-the-word-of-god/)
–
Very often as He taught the people, Jesus sat in a boat on the Sea of Galilee.  In modern Israel the Jewish people call it “Lake Kinneret,” which comes from the Hebrew word, “kinnor.”  Kinnor means  “harp!”  Take a look at the map of the Sea of Galilee below.  It really IS shaped like a HARP, and Jesus certainly did reveal many “Dark sayings” on “The Harp!” 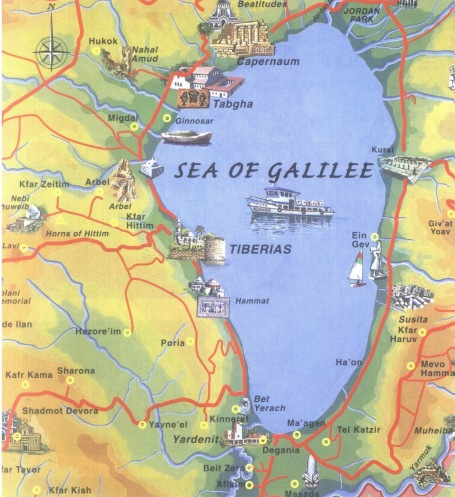 –
A Tale Of Two Seas.
Several rivers feed into Lake Kinneret which is full of life.  It is teeming with fish, particularly tilapia, also known as St. Peter’s fish.  It was here that the miracle of the net-breaking, boat-sinking load of fish occurred.
–
Streams from the north flow in, the Jordan river flows out, and it empties into the Dead Sea, the lowest place on planet earth at some 1,407 feet below sea level.  It ain’t called “Dead” for nothing.  This body of water is 9.6 times saltier than the ocean.  Absolutely NOTHING can live in it.
–
The Jordan river, “Yarden” in Hebrew, is derived from the word “Yarad,” which means “To descend or flow down.”  Its literal meaning is “River of judgment.”
–
Holy Spirit Pictures.
When the Children of Israel left Egypt, they passed through the Red Sea.  When they finally crossed over into the Promised Land, they had to walk on the dry river bed of the Jordan, the waters of which God was holding back for them.  The Holy Spirit picture is this:  They came OUT of Egypt (a picture of the world) through the Red Sea, a picture of the blood of the Lamb.  They passed through the Jordan (Judgment) on dry ground into God’s rest:  The Promised Land.
–
This is a graphic description of New Birth in Christ!  As believers, because of what Jesus did on the cross, ALL JUDGMENT is behind us.  We came out of the world, passed through the blood, judgment was held back for us because Jesus paid for us, and we are now part of God’s family.  We live in His land!
–
Law And Grace.
The Sea of Galilee stays fresh because it has both influx and outflow of fresh water and is full of life as a result.  The Dead Sea on the other hand, has water flowing in but NO outlet. It is dead for that very reason, kinda like someone who takes and takes and takes but gives nothing back.
–
These two bodies of water showcase the stark contrast between Law and the Gospel: Grace.
–
People who understand the gospel are like the Sea of Galilee: Supply-minded.  They give freely because they know how much they are loved by God.  Such knowledge helps them to receive freely.  The flow is effortless.  That is why they are so full of life.  You see, unless God first fills us up, we have nothing to give.  We are bankrupt, remember.  Without Him we can do nothing….and I do mean NOTHING.  You cannot pour out of an empty vessel.
– 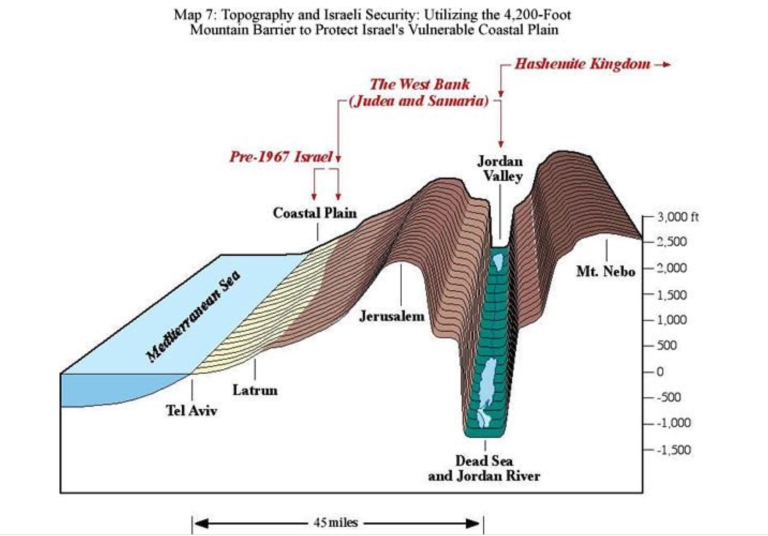 –
The Jordan:  Picture Of Judgment.
The “River of Judgment,” which ends up in the Dead Sea, kills everything.  All “Jordans” end in dead seas.
This body of water is surrounded by miles of barren desert.  If it rains 5 times a year you’re lucky.  Just as the Jordan ends at the Dead Sea so this typifies the end result of the law, of the judgment it brings.  The letter truly does kill…..EVERYTHING.
–
A judgmental attitude will kill a relationship quicker than anything. The lowest form of Christian living, preaching or ministry, is judgmental or “Law-centric,” meaning “Legalistic.”  It amounts to so much finger pointing.   If that happens to typifie your life or ministry, sooner or later you will end up like the Dead Sea surrounded by lifeless desert.  Many such churches and ministries have actually shut down or dried up.
–
Galilee:  Picture Of Giving And Receiving.
There are two sides to Grace, as there are two sides to the Sea of Galilee:  Giving and receiving.  You have influx of water from 3 rivers, a picture of the Trinity, abundance of fish in the sea, and outflow of life-giving water.  This describes Grace-minded people who are conscious of God’s constant supply and are generous givers.
–
You’ve heard it said, “It is more blessed to give than to receive?”  While that is true, we have not been told the whole story.  Let’s look at that verse in it’s proper context.
–
Acts 20:35.
“I have shown you in every way, by laboring like this, that you must SUPPORT THE WEAK. And remember the words of the Lord Jesus, that He said, ‘It is more blessed to give than to receive.”
–
Paul is referring in this verse to helping our fellow man, in particular those who are weak.  That doesn’t mean that we don’t give to God, of course.  But are you giving out of a sense of guilt or duty as if you owe God?
Church, we don’t owe any debt to God for our sin.  Jesus OVERPAID ALL OUR DEBT for us.  We HAVE…We’re not not trying to get it…we already HAVE (present tense) PEACE WITH GOD.  The war is over.
–
Why We Give To God.
So why do we give to Him?  Precisely because we know we don’t owe Him.  It isn’t a gift if you believe you’re repaying a debt.  There is no blessing in it.  Your giving can only be a gift if your debt is PAID IN FULL!
–
Most churches seem to have to beg you to give money, to serve in their ranks, to witness for Christ, or bring others to Church.  They do this without first sowing the seeds that will yield the fruit of “BEING witnesses.”   In order to have something to give, be it money, Christian service, or whatever, you must first have received from God.  Again, you can’t pour out of an empty vessel.
That’s the lesson of Mary and Martha.
– 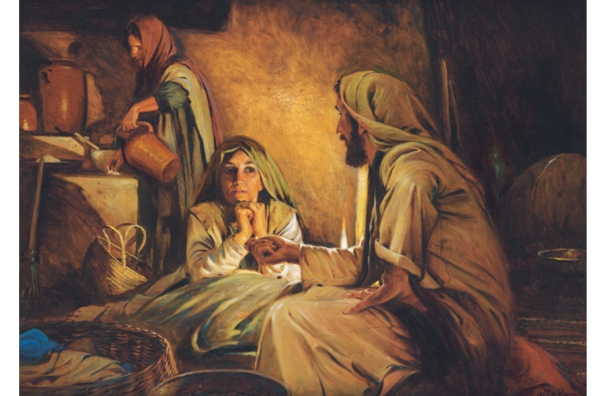 –
Mary And Martha.
Jesus had come to their home in Bethany, no doubt hungry and tired.  Though God never gets tired, Jesus as 100% man definitely did.
–
Martha only saw the human side and sought to serve Him.  He had the twelve disciples with Him and there was a lot of work to do.  That’s all she saw:  The Man and the company with Him.   But Mary sat at Jesus’ feet and took from Him. All she wanted was to be near Him and to hear Him speak.  She saw His Diety; she saw God beyond the veil of His flesh.
–
Martha saw her sitter here and got so ticked off at her, she complained to Jesus about it, blaming them both in one shot.   But who did He defend?  The one who took from Him:  Mary.  She chose the good part which would not be taken away from her.  Mary made Him feel like God.  He was refreshed by her taking.
–
Martha cared only about serving Him but, as I said, when you try to serve the Lord without first being filled you, are pouring out of an empty vessel.  It makes you bitter, angry and judgmental.  That was Martha.
–
So you see, where it concerns our fellow man, it is more blessed to give than to receive.  But between us and our Daddy, it is more blessed to RECEIVE from Him than to give.
–
Isn’t God AWESOME to hide little treasures like this?  He can use His land to teach us things;  even places like the Dead Sea and the Sea of Galilee.