Ruth 3:1-4
“Then Naomi her mother-in-law said to her, “My daughter, shall I not seek security for you, that it may be well with you? 2 Now Boaz, whose young women you were with, is he not our relative? In fact, he is winnowing barley tonight at the threshing floor. 3 Therefore wash yourself and anoint yourself, put on your best garment and go down to the threshing floor; but do not make yourself known to the man until he has finished eating and drinking. 4 Then it shall be, when he lies down, that you shall notice the place where he lies; and you shall go in, uncover his feet, and lie down; and he will tell you what you should do.”
5 And she said to her, “All that you say to me I will do.”
–

–
To be sure, there are many spiritual truths to be found in this short but power-packed little book.  But our awesome God never wastes any words.  His book is a multi-layered storehouse of treasure.

In this beautiful love story He has given us some natural wisdom.  There are tips on how to prepare for a date, the best time to present your case to a prospective client, and how to set yourself up for a positive outcome.

In the passage above, Ruth got some good advice by her mother-in-law, Naomi, on how to propose without trying to propose, so to speak.  In the Jewish culture of that day, a woman could ask a near kinsman to redeem her, in other words, marry her and redeem her situation.  He could buy back her lands and property and restore it to the one who had fallen on hard times.

How To Prepare For A Date.

#1. The first thing Naomi told Ruth was to bathe, always a good idea when you go out on a date……unless you really don’t want to go out on a second date.
#2. Then she said, “Anoint yourself.”  It’s good to be bathed and clean, of course.  But when you go out, for goodness sake, use some deodorant and dab on some cologne or perfume. Your date will thank you!
#3. Next she told her to, “Put on your best clothes.”  First impressions are hugely important, as everyone knows.  What you wear sends a message and shows how much you value your date…..or not.
#4. The fourth direction she gave Ruth was where to go to find Boaz.  He was at his threshing floor that night, winnowing barley.

The message is, if you are looking for a companion, a date, or a spouse, you need to go to where there are people because, if all you do is sit around the house asking God, “Who, When, Where,” you’re going to be waiting a long time.  The Bible says that if you want friends, go to where there are friends and BE FRIENDLY.
–
The Best Time To Present Your Case.
There is even natural wisdom to be gleaned about when is the best time to make a request, pitch an idea, or make a presentation.  The best time to do any of these things is after the other person has eaten.  So, if you want preferential treatment, FEED YOUR CLIENT, or the person of whom you are making a request.
–
Wise Naomi told Ruth not to make herself known to Boaz until AFTER HE HAD EATEN. Humans in general are in a much more favorable mood after a their stomach is full.
–

The Power Of Food.
This principle is demonstrated throughout the Bible.  One instance is found in the story of Jacob and Esau.  When their father was very old and about to die, Isaac sent Esau out to get him some venison so he could have his favorite stew.

After his meal, he had planned to bestow the first-born blessing on his eldest son, Esau. As you know, Rebecca overheard his plan and had Jacob go bring her a goat.  She prepared some stew for Isaac just the way he liked it and Jacob brought it to his father.  After he ate and was satisfied, he tricked his father into believing he was Esau.  Jacob, fooled by the ruse, gave to Jacob that which rightfully belonged to his brother.  Once it was given, it could not be undone.
–

(To learn more about the first-born blessing and why it was so important, please follow the link below: 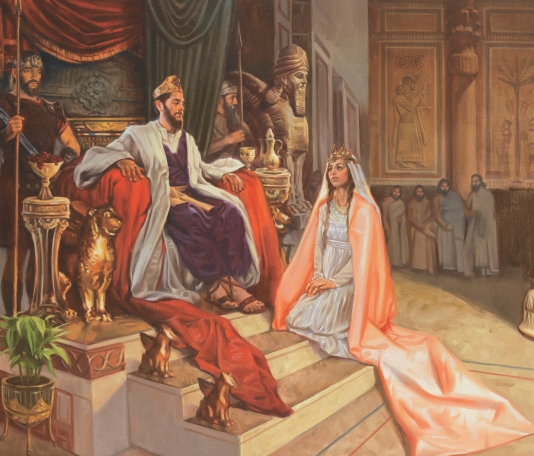 Esther is another great example. When she needed to come before the king to plead for the life of her entire nation, she not only waited until after the king ate at her first banquet, she invited him to a second one and then told him of her request. She REALLY knew how to present her case!  The result?  She got what she wanted and…..then some!
–
At The Feet Of Boaz.
Ruth 3:4 “ 4 Then it shall be, when he lies down, that you shall notice the place where he lies; and you shall go in, uncover his feet, and lie down; and he will tell you what you should do.”
–
Naomi showed Ruth how to propose without actually proposing.  She was to go the the threshing floor, notice where Boaz lay down, but not let her presence be known. After he fell asleep, she was to go over to him, uncover his feet and lay down at his feet.
–
In many cultures around the world, it is a sign of great respect toward another person to touch the their feet or fall at their feet, deeming them more worthy than you. Humbling yourself before that person has the effect of putting yourself in a good light, making the other person more favorably disposed to grant your request.

Videographers use this principle.  They know very well that if you film an individual down near his feet, you make the person appear larger than life.
–

At Jesus’ Feet.
In the same way, wonderful things happen to those who fall at Jesus’ feet. Throughout the Bible are many accounts of people who did just that.  For more on that topic, you may follow the link below.  You’ll also learn something wonderful about Jesus from Mary and Martha:

The moral of the story is, whether physically or in your attitude, humble yourself before Jesus, the greater Boaz, because grace, like water, always flows to the lowest place.

–
Cover Me!
Ruth 3:6-9
“6 So she (Ruth) went down to the threshing floor and did according to all that her mother-in-law instructed her. 7 And after Boaz had eaten and drunk, and his heart was cheerful, he went to lie down at the end of the heap of grain; and she came softly, uncovered his feet, and lay down.
8 Now it happened at midnight that the man was startled, and turned himself; and there, a woman was lying at his feet. 9 And he said, “Who are you?”
So she answered, “I am Ruth, your maidservant. Take your maidservant under your wing, for you are a close relative.”
–
Ruth did all that Naomi instructed her to do.  After Boaz lay down, she quietly came over to him, UNCOVERED HIS FEET, and lay down.  There is great symbolism in what she did.  Boaz understood what she was asking by her actions and was kindly disposed to grant her request. 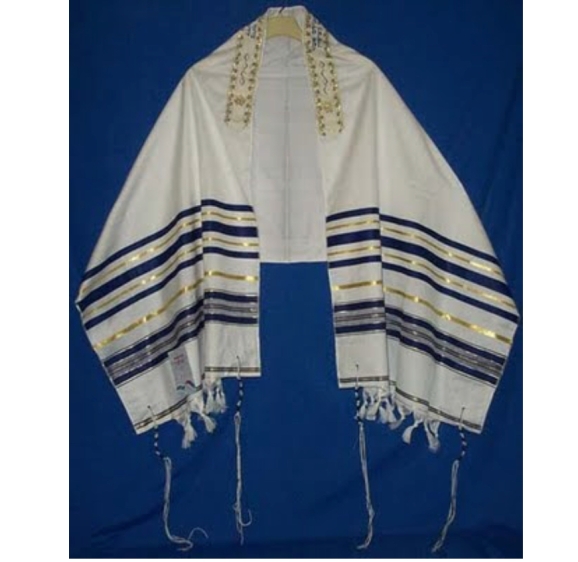 Tallit.
Ruth and Boaz lived after the institution of the prayer shawl in Numbers 15.  It was very important to God that all Jewish males wear a one because of it reminded Him of His beloved Son.  To understand more about the symbolism of the tallit, you may follow the link below:

Since every Jewish male was required to wear one, Boaz would no doubt have been compliant. As a close relative of hers, when she was askin him to take her under his wing saying, in effect, “Cover me; (with your tallit); redeem me.  Redeem my situation.” It was a proposal of marriage.
–
Closer Relative.
Ruth 3:10-13 10 Then he said, “Blessed are you of the Lord, my daughter! For you have shown more kindness at the end than at the beginning, in that you did not go after young men, whether poor or rich. 11 And now, my daughter, do not fear. I will do for you all that you request, for all the people of my town know that you are a virtuous woman.
12 Now it is true that I am a close relative; however, there is a relative closer than I. 13 Stay this night, and in the morning it shall be that if he will perform the duty of a close relative for you—good; let him do it. But if he does not want to perform the duty for you, then I will perform the duty for you, as the Lord lives! Lie down until morning.”
–

What an amazing statement!  Ruth is the only woman in the Bible that God calls, “A virtuous woman.”  That doesn’t mean she was the only one, but the only one the Holy Spirit specifically calls, “Virtuous,” yet she was a Gentile.  Incredible!

–
Boaz was more than willing to take Ruth as his wife, but there was a man who was a closer relative with whom he had to speak first.  He would address the matter the very next day.  He told Ruth to lie down until morning, then leave the threshing floor before it was light enough for her to be recognized.

The Benefits Of Resting.

“So she lay at his feet until morning, and she arose before one could recognize another. Then he said, “Do not let it be known that the woman came to the threshing floor.” Also he said, “Bring the shawl that is on you and hold it.” And when she held it, he measured six ephahs of barley, and laid it on her. Then she went into the city.
When she came to her mother-in-law, she said, “Is that you, my daughter?”
Then she told her all that the man had done for her. And she said, “These six ephahs of barley he gave me; for he said to me, ‘Do not go empty-handed to your mother-in-law.’ ”

Remember when Ruth first came to Boaz’s field?  Back then, she was able, by her own effort, able to glean one ephah of barley to bring home to Naomi.  An ephah is 10 days supply, in case you didn’t know.

But this time, after she rested at Boaz’s feet and without any effort on her part, he gave her 6 ephahs of barley.  That’s 60 day’s supply!  The Holy Spirit, our Master Storyteller, is drawing a picture for us.

60 is 10×6, of course.  But 6 is the number of man, in Bible numerics, whereas 7 is the number of completeness.  That means 6 is incomplete.  Well, our God never ends on a “6.”  He always gives over and above all that we ask or think.  He’s the God of More Than Enough!  And what or who is the seventh?  The Barley-Man himself:  Boaz!

(For more on numbers in the Bible, you may follow the links below:

Ruth is about to have far and above more than enough.  In fact, she will have an endless supply!   There will no longer be any need to go and do gleaning.  She will be married to the man who owns the field!

Just as in this story of Ruth and Boaz, when you have Jesus, you also have an unlimited supply for all your needs.  Our Jesus owns all there is!

But remember, Church:  When are blessed, we must not forget our “Mother-in-law, ISRAEL!

Please follow the link below to Part 9.  Let’s see how it goes at the gates of the city with the nearer kinsman:

One thought on “Story Of Ruth Part 8 of 11: The Threshing Floor”