–
How much do you think God loves His Son?  That’s how MUCH He loves you!💖  Think about that!  When that realization fully dawns on you, you won’t have to work or strive to set your love upon Jesus: YOU WON’T BE ABLE TO SET YOUR LOVE ON ANYONE OR ANYTHING ELSE!  You’ll become effortlessly, irrevocably, head-over-heels in love with The One Who first love you without even trying.
–
That’s the Bible’s definition of Love: “We love because He first loved us and gave Himself for us.”💖
–
God’s Seven “I WILLS” 💖
There are seven “I Will’s” of God in this last passage.  The last one in parentheses that is in italics I have added because it is implied though not expressly in the original text.  Look at this:
“THEREFORE”…..since your love is now (effortlessly) set on Him, God WILL:…..Not maybe, not could be, not probably, not I hope so…..HE WILL…..most assuredly, most definitely…..deliver you!  You can take that to the bank!
–
God says He WILL “set you on high.”  That means, whatever you do, He WILLgive you good success, even prominence.  If you own a company, He WILLcause it to have great visibility. If you are a minister, He WILL enlarge your ministry.  If you have a job, He WILL see to it that you’re elevated to a position, like Joseph in Egypt.  You WILL have a greater sphere of influence.  He doesn’t do this to inflate your ego, but so that you can share the truth of this wonderful Jesus with as many people as possible.
–
Why Jesus Has The Name Above EVERY Name. 🙌🏻
Why does Jesus have a Name that is higher than any other name?  Because He humbled Himself more than any other man.
Philippians 2:5-10 says, “Let this mind be in you which was also in Christ Jesus, who, being in the form of God, did not consider it robbery to be equal with God, but:
#1. He MADE HIMSELF OF NO REPUTATION, taking the form of a…
#2. BONDSERVANT,and  coming in the likeness of men. And being found in appearance as a…
#3. MAN…
#4. He HUMBLED HIMSELF and…
#5. Became OBEDIENT to the  point  of…
#6. DEATH even…
#7. The DEATH OF THE CROSS.
–

–
The Father did not give Jesus that NAME just because He was His Son, which, of course, He always is.  The Father didn’t give Jesus that NAME because of all the signs and wonders He performed while on earth, which He, thankfully, did.  AMEN!  🙏
–
HE HIGHLY EXALTED HIM BECAUSE HE TOTALLY HUMBLED HIMSELF MORE THAN ANY OTHER.
–
Seven Times.
He humbled Himself seven times, the number of completeness:
#1.  He went down one step by making Himself of NO REPUTATION, divesting Himself of His Deity.
#2.  He went down another step by becoming a man.  But not just any man.  He was born as a tiny, helpless infant, dependent on His Mother.
#3. His 3rd step down, being found in fashion as a man, He further humbled Himself to that of a servant.  But not just any servant…
#4.  A bondservant.
#5. But not just any bondservant, the most obedient one.
#6.  He died a physical death.  But not just any death for there are many forms of death.
#7.  He died the worst, most shameful, most excruciating, and cruelest kind of death:  The cross.
–
Seven steps down.  Perfectly complete submission!…..THEREFORE GOD HIGHLY EXALTED HIM!!!
– 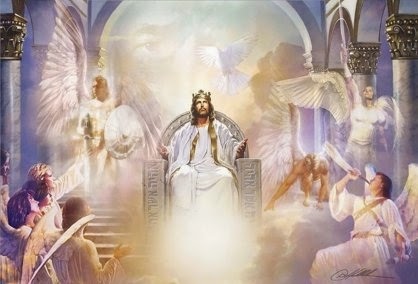 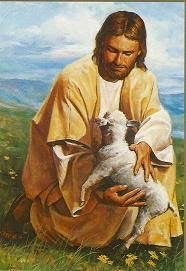 –
If you are already in trouble, even if your problems are of your own making, He is there to redeem you out of them. Psalm 23 says, “Yea though I WALK…”  I was walking along with the Lord.  Then at some point “I walked” my own way and  “I“ got into trouble.  But because my Father never leaves or forsakes me, He’s with me, even in the valley of the shadow, and He helps and delivers me.  Fortunately, it’s just the shadow of death and not death itself. The shadow of a snake never killed anyone, and neither will the “Shadow” of death.
–
He Honors Us.
Our Father not only delivers us but, in spite of ourselves, He honors us!  What a God!  What a Father!  When you get into trouble, especially if it was your fault, you certainly don’t feel worthy of being rescued, but honored would be totally unexpected!  Yet that’s what our Father does for His beloved. 💖
– The fifth and final Name of God in this Psalm is the very last word of the very last verse:  “And show him my Y’shua…..JESUS!  It literally ends in “Jesus’ Name.”  Y’shua means “Salvation” in Hebrew.  Jesus paid for our complete salvation, not just spiritually, but soul and body as well.
In Isaiah 53 it says “The chastisement of our peace–our shalom–was upon Him and by His stripes (literally stripe–singular) we are healed.”
–
Shalom.
The Hebrew text shows us this healing refers to physical healing.  The word Shalom in Hebrew does not merely mean peace like we in the West think of it but complete health and wholeness in every area.
–
(For a more in-depth look at the meaning of the word, You may follow the link below:
https://emmausroadministries.international/2016/03/06/shalom-שלום/)
–
By His “Stripe.”
You may be wondering about the use of the SINGULAR word for “stripes.” That is a whole subject in and of itself.  Understanding why the Holy Spirit used the singular form of the word will not only fill you with awe, it will make you want to fall on your face!  If you want to read all about it, follow the link below; but I warn you:  It is not for the faint of heart and I’m not kidding.
–
Here’s the link if you’d like to proceed:
https://emmausroadministries.international/2016/03/18/by-his-stripe-we-are-healed-2/.
–
Long Life.

God says that He will SATISFY YOU with LONG LIFE.  He did NOT say He gives you a specific number of years.  What does that mean? 🧐 Simply this:  The criteria used to determine how long your life will be is subjective, individual to every person.  It is dependent upon YOUR SATISFACTION.  😮How many years will satisfy you?  Are 80 years OK?  How about 90?  100?  What is it that will meet with your satisfaction?

Am I saying that God has not appointed a time for us to die?  NO; but there is a verse in Hebrews (9:27) that is often misquoted and misunderstood.  Here is what it actually says:
“…it is appointed for men to die ONCE, but after this the judgment…”
–
This is a general statement of fact that man will only die once, not twice, although you realize that Lazarus actually died twice, right?   Well, in the last days, the entire end-time or rapture generation will not die at all!  😮  As a general rule, however, man dies only once, but it is not an APPOINTED time.

What does it mean to “Fear the LORD?”  Jesus defined it for us as “Worship.”  For more on this topic, please refer to the link below:
–
https://emmausroadministries.international/2016/07/22/fear-worship-wisdom/
–
Ah!  So the more you worship God, the longer you live!
–
How To Shorten Your Life.
By the same token, some things you do can shorten your life, like dishonoring your parents.  Can you smoke, drink, and/or do drugs, live an unhealthy lifestyle and still go to heaven?  Yes you can…..you may just get there faster! 😳
–
The majority of Christians love the Lord and, occasionally, fall into sin.  They don’t seek to sin on purpose or try to live in it.  They love Jesus and want to please Him.  But from time to time, you can lose your temper, become depressed, worry and/or complain, etc.  This is a result of being resurrected spirits our UNresurrected bodies.  It is not a picture of someone who is living in sin.

There are people who are living in sin to the point they don’t even know what’s right anymore.  Sin, as defined in the Bible, is still sin.  Your Heavenly Father HATES SIN.  Though He always loves you, He does not accept you in that state, just as you do not accept bad behavior from your children.  He loves you too much to let you stay that way.  He wants to see you live right because He wants to see you thrive and succeed.  Sin destroys everything and everyone it touches…..period, and your Father doesn’t want to see you destroyed.  PERIOD.  End of story.

Rather than leave you in that condition, if you persist, He might prefer to bring you home earlier than to see you destroy yourself or your loved ones further.  HOWEVER…..It is SO MUCH BETTER to listen to the gentle voice of the Holy Spirit leading you in the paths of righteousness, to live long, see to more of Jesus, and tell others about Him than to go home early!
–